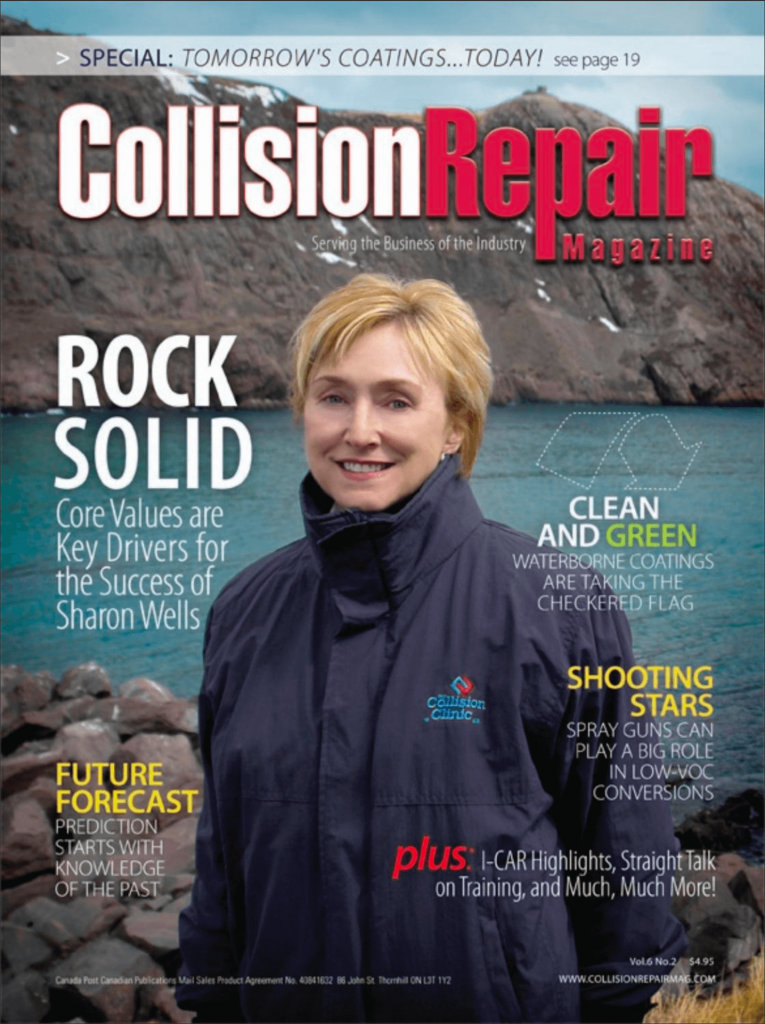 In the words of Sharon Wells, the rock behind CSN Collision Clinic, you must be like spandex to succeed in the collision repair business.“You have to know when to expand and when to contract,” Wells tells Collision Repair.

“You can’t be complacent, not even for a second.”With vehicle complexity on the rampant rise, Wells and her team keep their fingers on the pulse of the industry, eagerly anticipating the next pivotal step to take the business to the next level. Between two locations—the second of which opened in 2018—CSN Collision Clinic touts 40 employees, a host of OEM certifications and an ever-flowing stream of training opportunities for its staff.

“If you’re not focused on new technologies and understanding the specialized processes required on today’s vehicles, you’re taking a big risk. You could easily be left behind,” cautions Wells.While other businesses may compare themselves to their neighbours, or even counterparts across the country, Wells says she has one set standard for the business.“I judge by excellence. There’s no sense in comparing yourself to others; worry about your own operations and everything else will follow.“The integrity, passion and soul of the company owner Glenn Hickey is instilled in all employees, who service customers with those values every day.” 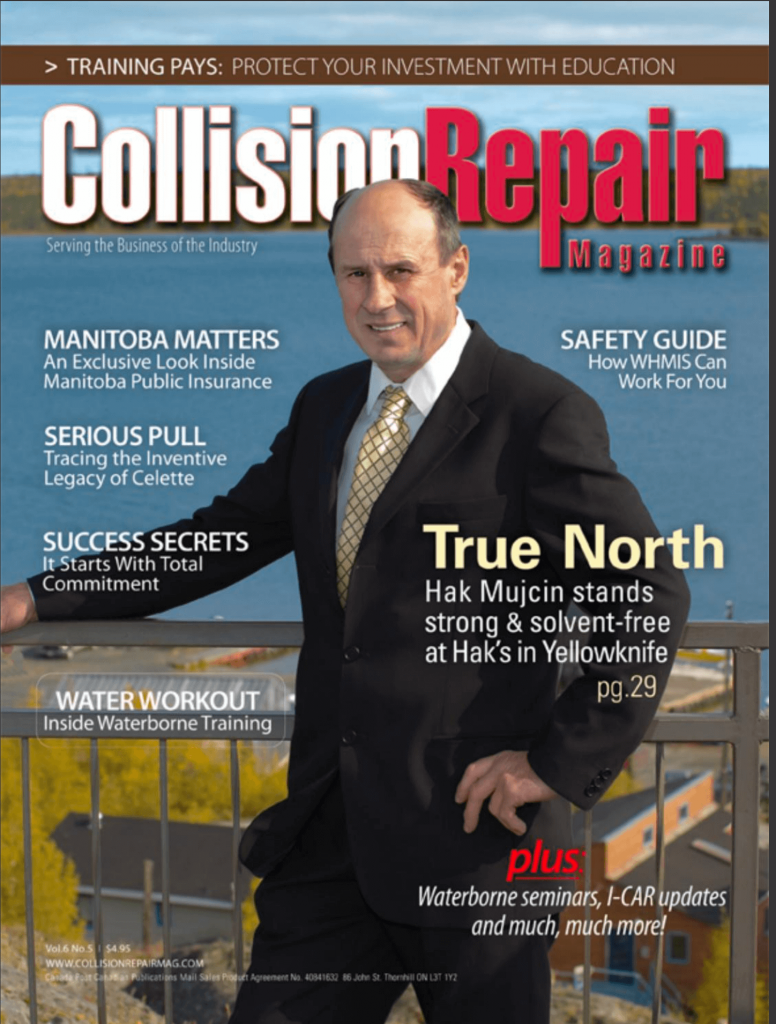 Since 1978, Haks Autobody has been serving the Yellowknife community in the North West Territories. Since his Collision Repair cover appearance, Hak has passed the reigns over to his son, Senad Mujcin, but still helps around the shop. Senad speaks highly of his father’s past and strives to keep the successful family-business alive and well.

Senad had learned at an early age how well his dad was respected by the community as well as the shop’s reputation for having the most advanced equipment available in the territories. “The way we are here is you have to wear a lot of hats,” explained Senad. Based on the shop’s isolated location, the facility has taken on several operations in-house.

“We have an auto-calibration system that we’ve been running for a couple of years now in our shop. We are also very advanced equipment-wise. That’s what really drives us apart from other shops, we do everything in-house with only fi ve employees, and we make sure it’s done accurately,” explained Senad. 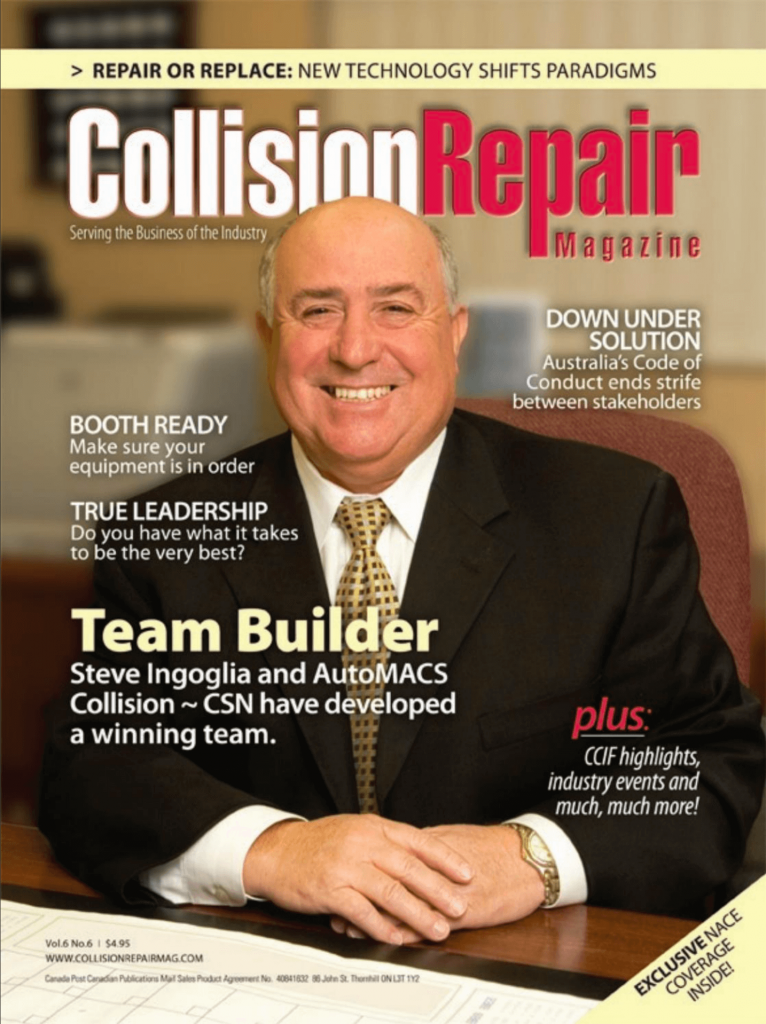 A member of the automotive aftermarket for 50 years, Steve Ingoglia says not much has changed since he appeared on Collision Repair magazine’s cover in 2007. He still serves as president of CSN AutoMACS Collision in Oakville, Ontario, where his wife, Mary, serves as CEO and, in Steve’s words, “the backbone of the company.” His son, Adrian, serves as owner and operator of the company.

Having been in the industry for as long as Steve has, he has been able to see the many changes that have occurred over the course of decades, but he says that the core of the industry is still the same.

“Overall, I think it’s basically the same business it was 20 years ago, just in a different way,” he said. “But cars are still cars, they still need to be fixed and fixed properly.” Now, Ingoglia is looking forward to his retirement after a long and successful career.