Much has changed for Lorenzo D’Alessandro since he graced the inaugural issue of Collision Repair magazine in 2002. Three things remain constant, though: his love for his family, his dedication to the collision repair craft and his forward-thinking drive for success.

Since the beginning, when Ralph D’Alessandro first broke ground on CSN 427—followed not long after by CSN Avenue—the company has held a progressive vision, looking keenly into the future for any way to maximize their success. In addition to being one of the flag-bearing first franchisees in the CSN Collision Centres network, CSN 427 was the first Canadian shop to join the AkzoNobel Platinum North American Performance Group, a group of high-performing collision centres that meet to discuss continual improvement initiatives and work through shop issues.

The D’Alessandros have carried the same scope into its third generation of ownership, putting ample importance on training and OEM certification efforts.“If a shop is not investing in training and updating its equipment, it’s going to catch up to them,” Lorenzo warns. Currently, CSN 427 Auto is considered one of the most OE-certified facilities in the country, touting more than 20 OEM certifications a highly skilled, highly trained team. Just last year the D’Alessandro family added a new facility to their fold, acquiring Mississauga, Ontario’s CSN Heartland. “We’ve had two locations for a long time and now adding a third in a high-traffic area is a great opportunity for us,” said Lorenzo at the time of the acquisition.

Lorenzo says his proudest feat in the industry has been watching his children, Jessica, who serves as the company’s marketing coordinator, and Nicholas, as well as his nephews Giulian and Gabriel, find their own in the family business. Throughout these unprecedented times, CSN 427 Auto’s willingness to grow, take risks and learn is a source of inspiration for shops all over the nation. “We’re continually changing, and not fearing that change,” said Lorenzo. 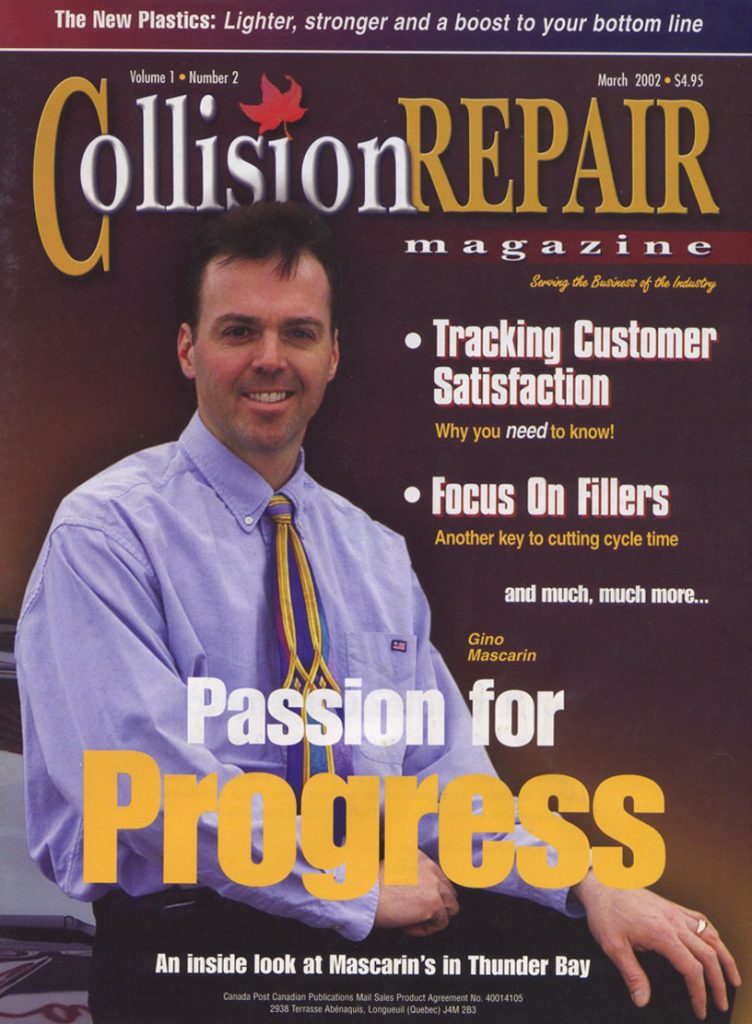 Gino Mascarin, the second-generation owner of Mascarin Collision, was the second-ever cover star to grace a Collision Repair magazine cover 20 years ago—and since then the collision repair shop has been going strong.

Surviving multiple recessions, and a global pandemic, Mascarin knows what collision centres need to do to stay in the industry long term and he believes it’s going to come down to making sure to keep up with the constant changes in the industry.

“The cream is really going to rise, you’re going to have to be very professional, very educated, very highly skilled in business,” said Mascarin. “I think the strong will survive, and I think you have to be on top of your game to stay in business.”

Mascarin Collision is celebrating its 60th anniversary this year, and Mascarin is also celebrating the fact that he will be passing on the torch to his son who will take over the family business and follow in his father’s footsteps. 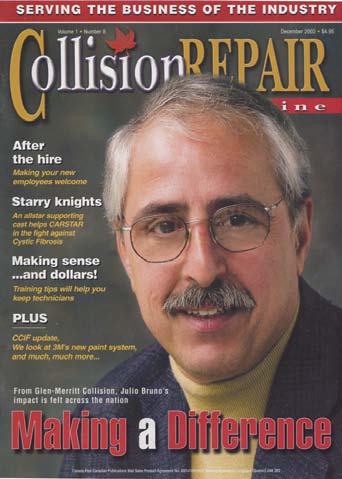 When Julio Bruno reflects on his lengthy successful career in the auto body industry, two things stand out: growth and family. Bruno’s journey began with a lone St. Catharines-based shop and now includes four locations throughout the Niagara region. Over these last 20 years, he has experienced that growth alongside his brother Frank, and sons Duane, John, and Ryan, the CEO of CSN.

“It’s truly a family business,” he says, noting nothing is better than working with loved ones. “There is pride in that.” The expansion has created synergies within the business that are important to a changing industry. Since his cover appearance, Bruno has seen banners emerge and skills expand. “The technician of 30 years ago was much different,” he says. “It’s a much better industry and better trade, with more skills required. There is also better equipment that makes the job easier.

“But by the same token, if you don’t have the knowledge and training, you can get yourself into trouble.” 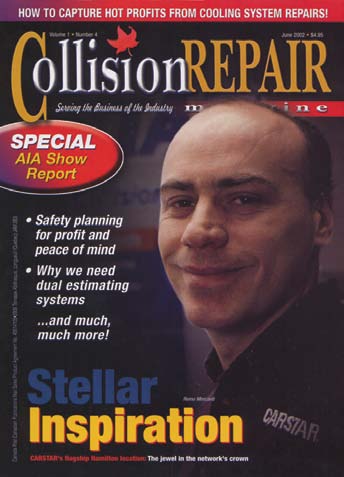 Remo Mercanti was on featured on the cover back in 2002, carrying the Mercanti family legacy as the original founders of CARSTAR.

Since his cover, Remo has sold multiple collision repair locations including the Ontario Auto Collision CARSTAR Rymal location in 2019.

Over the course of his career, Mercanti has put a great deal of importance on making sure the customer was always happy with the end results of their fixed car, and he takes pride in the work his collision repair locations have provided.

“When we saw a customer we wanted to look straight in their face and know that we did the best possible job we could to put their car back to the way it was before or better,” said Mercanti.

Now Mercanti primarily focuses on consulting with some locations in the CARSTAR network and watching his two children succeed in the automotive industry. 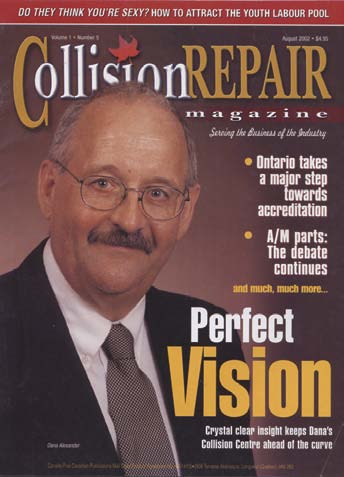 Never to be caught by surprise, always surveying the surroundings for threats— eyes carefully fixed on the task at hand. It’s okay, it’s not a bear. It’s just our friend Dana Alexander, and he’s got our back. Dana has been working in the collision industry for more than 40 years now and there isn’t much he doesn’t see coming.

As one of the founders of the Canadian Collision Industry Forum and proud operator of Dana’s Collision Centre in Fredericton, Dana has been working to organize the industry and prepare his fellow techs and shop owners for new technology and training before it arrives—not when. “What we see today is just phenomenal—the investments in technology, in the automobile, and they’re growing rapidly. The equipment that we have to purchase is the biggest investment we have to make, besides our infrastructure, in order to stay abreast of all the changes that been in the vehicle over the last 20 years,” Dana said in his follow-up interview with Collision Repair in July.

“Electronics are driving the industry right now for sure, and the different steels and aluminum. Aluminum was a big thing that came into the industry, although we’ve been fixing aluminum for 25 or 30 years because we were fixing Volvos with aluminum tailgates back in the 80s.

“CCIF gave us a platform to get together and discuss what was going on in the industry. It also gave us a forum where we could talk to suppliers, especially the OEs, aftermarket suppliers, the insurers; everyone is invited to be in the room. I think it solidifies the industry more and more,” said Dana. 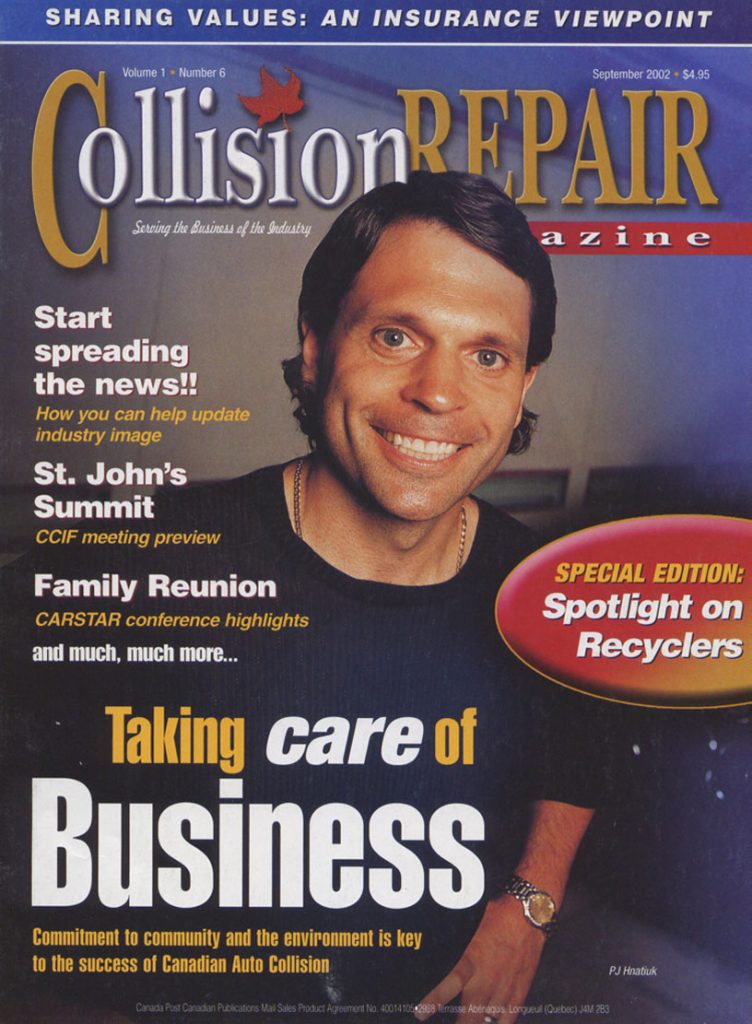 Around the time P.J. Hnatiuk was making his name in the Brantford, Ontario. collision repair community, banner shops were a bold new idea, but Hnatiuk could see the benefits coming.

Not long after Collision Repair first got in touch with Hnatiuk back in 2002, he signed his shop up to be a part of the newly established Collision Services Network (CSN). Hnatiuk recognized the direction that the industry was heading in and realized that he would need to have the trust of people in high places to move forward.

“I thought it was time to join a network and CSN has a lot of like-minded, family-owned businesses,” said Hnatiuk. “Insurance companies see the strength of doing business with banner programs and their advantages when it comes to marketing and purchasing.”

As true as it was in our publication’s first year as it is today, Hnatiuk said that the recurring struggle now is finding the techs to do the work.

“We have to work hard to attract young people to our industry,” said Hnatiuk. “One of the challenges is what we are able to compensate them with. I can see that a substantial rate increase literally has to happen at some point.”