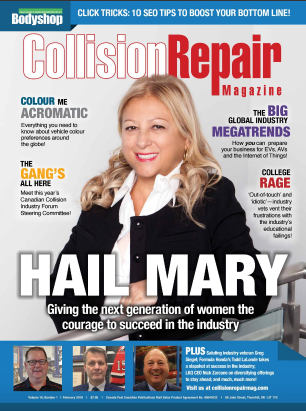 Mary Monardo has been owner of her 3,000 sq. m. bodyshop in Vaughan, Ontario, Collision Repair Experts since 1992, and since being on the cover in 2019 she says that she is proud at how far she has come, especially being a woman in the industry and having to deal with her employees testing her.

“It’s very difficult because all of your employees are men. As a woman in the industry you deal with a lot of disrespect, but then I fire them and kick them out, and then the next guy has respect. I’ve got the hang of it now,” said Monardo, who has spent years learning the ins-and-outs of how to fix a vehicle after a collision.

“I know how to repair a car, pen and paper doesn’t make a body shop – knowledge does,” said Monardo. This hands-on body shop owner has big plans in the future and is thinking about moving to the United States to open another body shop. 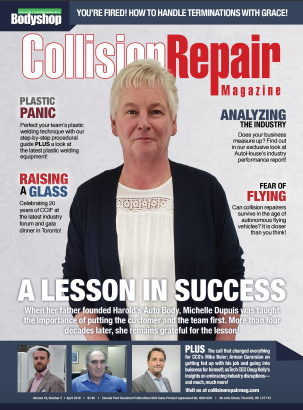 “Things have changed a lot, but the basics of auto body repair and the business remain the same. We help people out of a bad situation—we repair their vehicle properly, and care for our clients,” Harold Fjellstrom, who founded Harold’s Auto Body in Edmonton in 1973, told Collision Repair mag in 2019.

After a just over decade-and-a-half of retirement, he knows the business is in the safe hands of two of his children, Cameron Fjellstrom and Michelle Dupuis. Both share his belief that success requires more than just hard work—but a commitment to going the extra mile for both employees and clients.

In 1973, when Dupuis was just 11 years old, her father took an enormous risk founding Harold’s Auto Body, a 3,000 sq. ft. building in Edmonton, Alberta. The business began to grow and a new facility was needed to accommodate that growth. Land was purchased and a 10,000 sq. ft. facility was built. After studying accounting and fi nance at the Northern Alberta Institute of Technology (NAIT), Dupuis began planning a career at an accounting fi rm in downtown Edmonton—but life had other plans for her. Michelle began working at the shop in 1981 helping more and more and taking on added responsibilities under the guidance of her father. Her knowledge of the industry grew along with her confi dence to work in an industry that had few women.

The years that followed have proven that Harold’s faith in his daughter’s leadership were right. Dupuis stays strong in front of the pandemic with a fi rm stance. She keeps true to the customer-based focus that is at the heart of the autobody industry. “The industry is going up, but I believe that the repairers are going to need the assistance and the support of insurance companies in a more positive fashion,” said Dupuis. 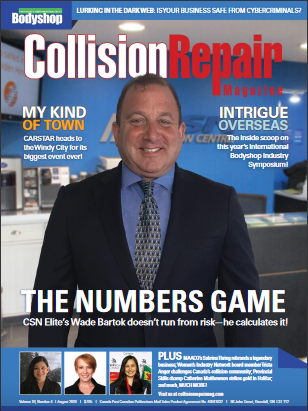 Since starring on the Collision Repair mag cover, Wade Bartok took the pandemic as an opportunity to look within his business and take any steps he could to further improve CSN Elite Bodyshop.

First order of business was to make a management team. “I’ve created a team capable of making quick and fundamental, yet also teambased changes,” Bartok told Collision Repair. His hard work has certainly paid off, and Bartok feels renewed with a new love for his business and a bold future ahead of them.

“I’m inspired to go back to work again because I’ve got such a great group that is taking the company places I never thought we could go.”

On top of management changes, Bartok brought new services to CSN Elite such as an ADAS recalibration machine and a Chief Goliath frame rack. 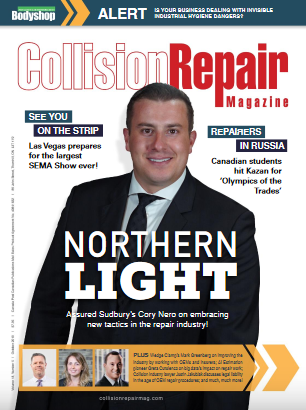 Cory Nero, the former manager of Assured Sudbury, has left the industry since being featured on the Collision Repair cover in the Fall of 2019, but the longtime aftermarket industry member still possesses the same love for automobiles that he always has.

Nero’s parents, Antonio and Gianna—the owners of Sudbury’s Regent Auto Body, now part of the Assured fold—fostered their son’s love for the trade from a young age. Once he was old enough, he began working at the business, soaking up all the knowledge he could, from the areas of vehicle construction, sales, repair and beyond. Antonio says he raised his son with a different mindset than his own father. Before emigrating to Canada at age 15 and opening Regent a decade later, Antonio had live and worked in Italy; though his father barred him from schooling once they arrived in Canada. When it came time to guide his own children, he encouraged his son to work at Regent in conjunction with his post-secondary studies at Laurentian University.

His father’s support clearly paid off, as Nero served as the market manager for all four Assured shops in Northern Ontario before leaving the trade this past March.

As time goes on, Cory Nero says he strongly believes more people will begin to realize the value of the collision repair industry from a business and administrative perspective, but also as a well-paid trade. 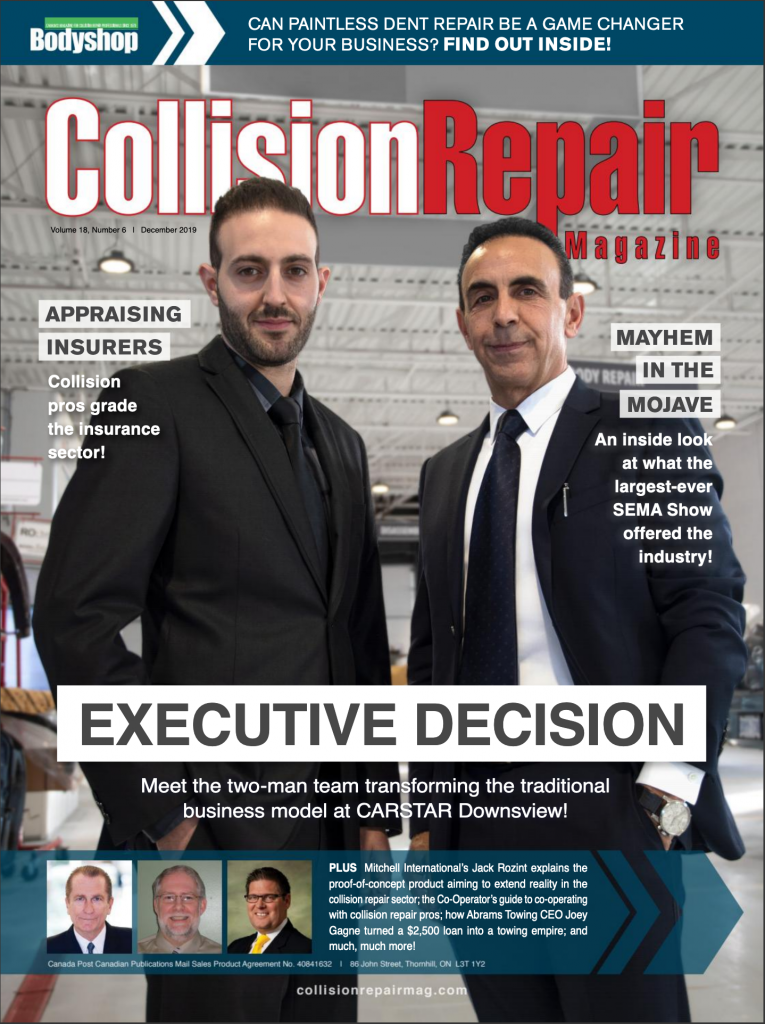 Pino Gagliardi is about as natural a businessperson as they come. He takes chances and blazes new trails with no fear and stellar success. And with his long-time business partner Michael Menna by his side, Pino makes up just one half of an unstoppable collision repair duo. Pino made his name in the Canadian automotive industry after becoming CEO of Impact Transportation Logistics in 1995, a refrigerated transportation logistics company.

A chance run-in with CARSTAR’s Canadian founder Sam Mercanti would see the course of Pino’s career take a different tack as he started to learn the in’s and out’s of collision repair.

“Sam knew this business inside and out—better than anyone in Canada. Not only that, but he knew the value CARSTAR could bring to the industry and I just couldn’t pass the opportunity up,” Pino said in his December 2019 interview with Collision Repair. By the time 2012 rolled around, Pino felt like the time had come to make his move in the collision repair industry, buying up CARSTAR locations Woodbridge, Bolton and what would be his crowning jewel; CARSTAR Downsview.

“I decided to double-down on the entire CARSTAR Downsview store—from the front office to new equipment, new employees, and—the biggest thing—a new culture,” said Pino. Though Pino recognizes he wouldn’t be where he is today without his right-hand-man Michael—the man with autobody knowledge that guides Pino’s ship, so to speak.

“He impressed me within 60 seconds of our meeting—with his demeanour, his industry knowledge and his vision. Of course I hired him.”