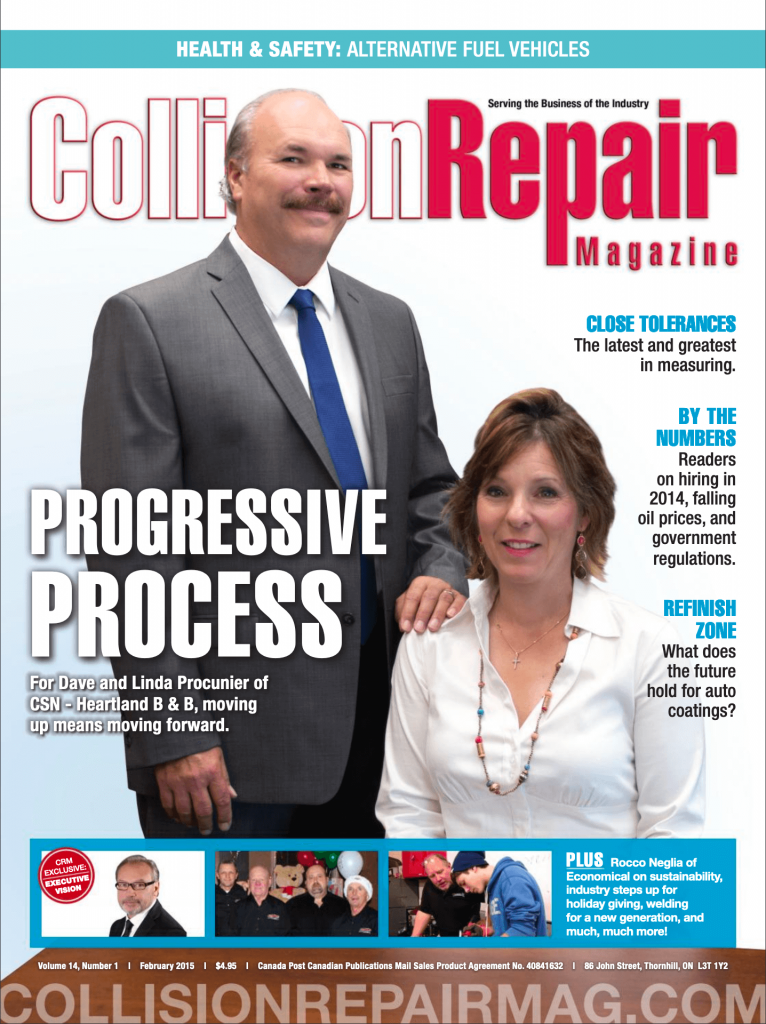 After many successful years in the business, Dave, and Linda Procunier owners of CSN Heartland, formerly known as CSN Heartland B&B decided to sell their business to the D’Alessandro family.

The couple built an extremely successful business that proudly served Mississauga, Ontario, community for several years. Under their ownership they obtained several OEM certifications, including those from BMW and MINI.

Dave has always been passionate about OE certifications. At a Global Automakers of Canada committee meeting in 2015 he spoke about why becoming certified is so important.

“There are so many things you need to know now to repair cars. If you are correctly trained and can access OEs procedures, you know you are bringing that car back to pre-accident condition,” said Procunier.

Now it’s time for the D’Alessandro family to uphold the Procunier’s legacy.

“We’ve had two locations for a long time and now adding a third in a high-traffi c area is a great opportunity for us,” said CSN 427 and CSN Avenue President, Lorenzo D’Alessandro. 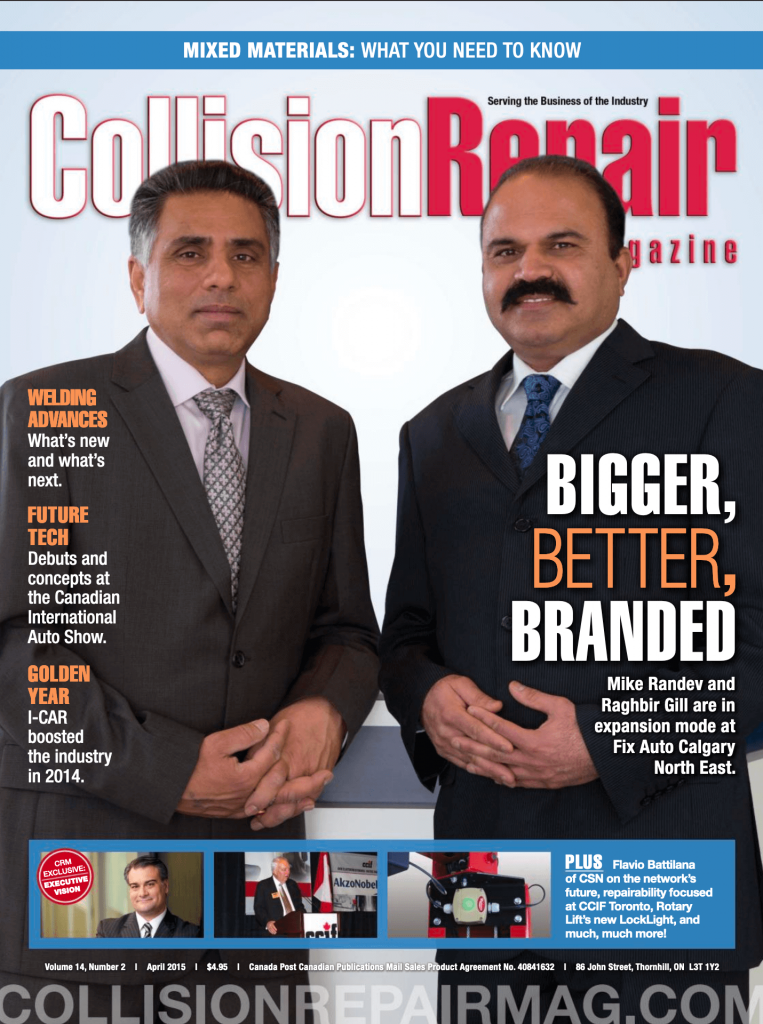 Mike Randev and Raghbir Gill were business partners from the beginning. “We both started at the same place, and we both started as apprentices around the same time,” said Randev.

“We have the community behind us,” said Randev. “We help improve the community we and our customers live in.” Randev says the biggest challenge new shops will have to face in the future is proving themselves to insurers. He’s experienced this fi rsthand.

“The biggest challenge we had was with insurance companies, simply because it’s tough to attract their attention when you’re small,” he says. “We had to prove to them we had the effi ciency, but it was our customers that really convinced them.” 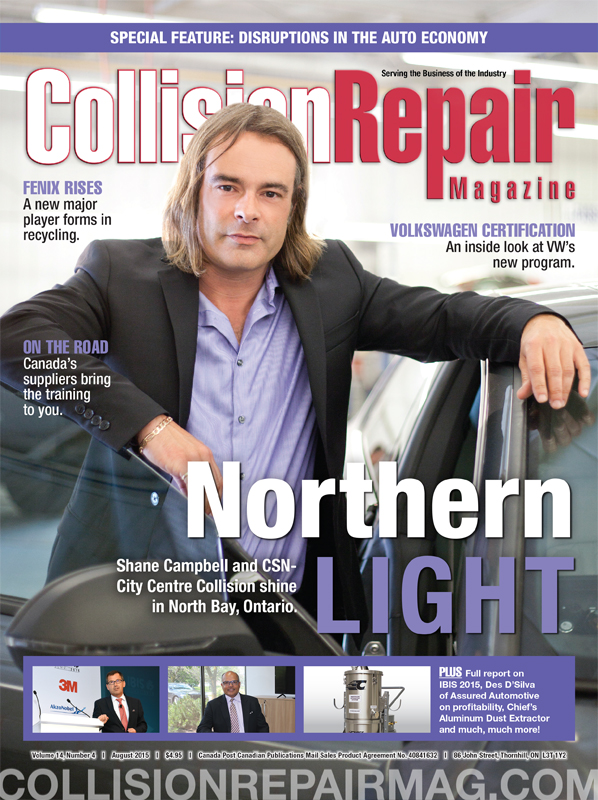 There are many paths that can lead to a career in the collision repair industry; many of which can provide the most unique skillsets to those who find themselves travelling along such a path. Shane Campbell is one such traveller, finding himself thrust into the workforce prematurely and approaching his craft from a highly creative angle. “I had to leave high school because of a family situation,” Shane said in his August 2015 interview with Collision Repair. “I decided to pursue a trade, and this was the one that interested me the most.”

During his time in high school, Shane thrived in his art classes and would later use this passion for quality and knack for design foresight to give him a leg up as a collision repairer. “I was always good at art. I just liked drawing lines, putting things where I thought they would be best suited.” As the early years of his career went on, Shane was starting to earn a reputation for his paintwork and the owner of CSN-City Centre offered him a job as a painter.

“There was a big learning curve from used car dealer to the fancy spray booth, but I got the hang of it,” said Shane. Shane spent his following years working and saving enough money to buy a 40 percent stake in the shop, and eventually, the entire thing when his partner sold off the remaining 60 percent to Shane in 2010.

For Shane it’s clear, “It’s not just about the money. It’s always about building something bigger. 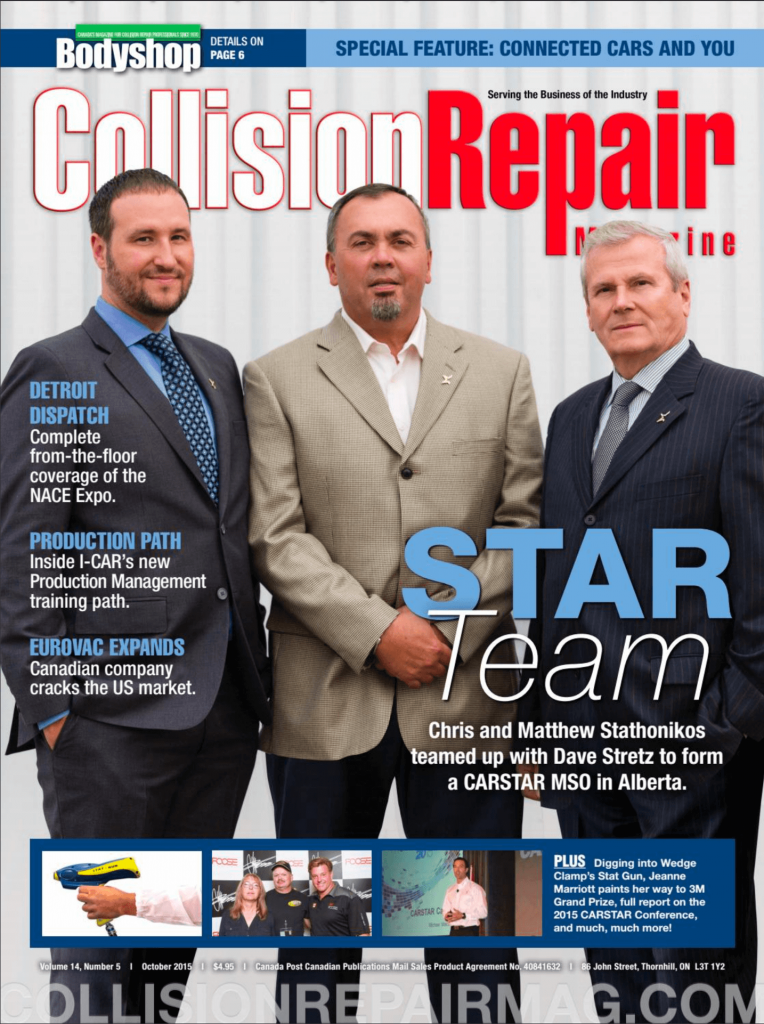 After more than 16 years with the CARSTAR family, the owners of the CMD CARSTAR Group Chris Stathonikos, his son Matthew Stathonikos and Dave Stretz decided to retire last year, selling their business to fellow CARSTAR owner, Shane Daerden.

From the moment Chris Stathonikos started working at a body shop back in Greece at age 15, he knew he wanted to own a facility. After immigrating to Canada in 1974, Chris was able to purchase a building and own his collision repair centre. However, one thing he did not expect was his son Matthew to take to the business as he did. Both with a passion for collision repair, the father-and-son Stathonikos pair decided to join CARSTAR in 1999. Then in 2004 Stretz joined the duo and together became the CMD Group. Over the past 16 years they became one of the largest multi-store owners in the CARSTAR network, with seven facilities in the greater Calgary area. However, in October of 2020 they decided it was time to sell the business.

“Although we built an amazing business, I am excited to retire, not think about cars every day and enjoy my summers in Greece,” says Chris. “After all this time though, it is the people that I will miss the most. I hope to stay in touch with all of the friends I have made over the years.”

“We took our business as far as we could and Shane has a vision to make it even bigger and better, which is encouraging to see,” says Dave. The younger Stathonikos, however, has not yet contemplated retirement.

“I still think CARSTAR is the best brand as well as an industry leader and I look forward to seeing everything that we have built continue to fl ourish. However, for now, I am most excited to just take a break and enjoy the time off with my family, before I decide my next move,” said Matthew. 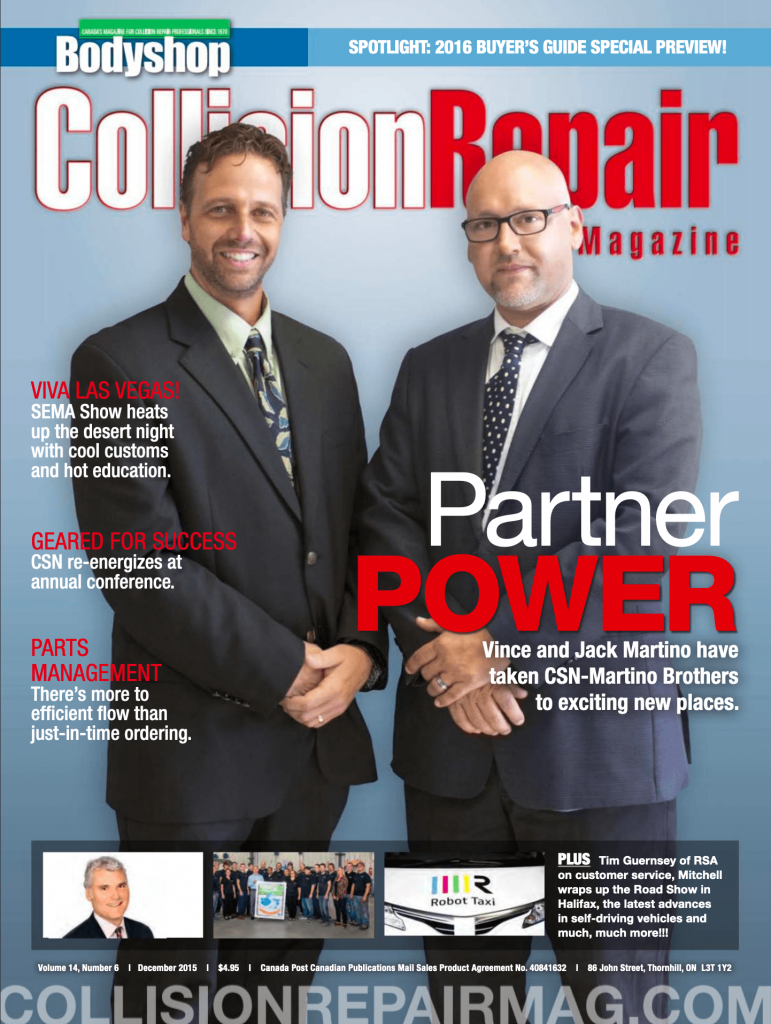 “Our ever-evolving lean journey is like breathing air. It’s not just how we do things. It’s who we are.” This is the maxim that the Martino Brothers run their business by. The other maxim is don’t tell people that they’re cousins, but that’s beside the point. Jack and Vince Martino have been steeped in the automotive world for their entire lives, coming up in the gas-station-turned-bodyshop that their fathers, the brothers Jack and Vince Sr., had been running since 1955.

After some years in the 70s and 80s learning the ropes and working around at different shops in Toronto, Jack and Vince returned to the fold their fathers’ shop with a wealth of knowledge and experience under their belts. Now the apprenticeships and training opportunities in the collision repair industry are helping out the Martino’s again, as they say that maintaining good relationships with educators and taking part in apprenticeship programs has become their secret weapon.

In Collision Repair’s December 2015 coverage of CSN Martino Brothers, Jack said that “We have been able to capitalize on young staff coming from auto training centres, high school coop programs, college programs and even walk-in candidates with interest in our trade.”

He continued, “We are extremely proud of our mentoring program within our facilities. Almost all of our current staff— the ones doing incredible things every day—worked under our senior staff at some point. Our unique team structure allows for opportunity and advancement.