AND THE KITCHEN SINK

A Nanaimo man may have better luck with Judy after his demand to the British Columbia Supreme Court for $32 trillion and an audience with Queen Elizabeth fell on deaf ears, following his harrowing bike accident. Tyler Adam Chamberlin filed a civil suit against the Insurance Corporation of British Columbia (ICBC) in November of 2018 after he was allegedly struck in a hit-and-run while riding his bicycle in Nanaimo. Most recently, Chamberlin represented himself at his March 1 B.C. Supreme Court hearing, which included lawyers for ICBC, the Attorney General of Canada, the Attorney General of British Columbia, the City of Nanaimo, Nanaimo Regional General Hospital and the Chief Electoral Officer of British Columbia. At the hearing, Chamberlin presented his modest demands: $32 trillion, the “reconstruction” of the RCMP, 500,000 shares in Tesla, the suspension of trade between Canada and China, the release of various classified documents, an MRI of his entire body, the dismantling of Transport Canada, a private meeting with the Queen and the “cleaning up of the swamp,” which was not defined in the court documents. On March 5, judge Douglas Thompson dismissed Chamberlin’s suit, saying his claims were “scandalous, vexatious, and otherwise an abuse of process.” Claims suggesting that the driver involved in the hit-and-run incident was the Hamburglar in the middle of a getaway have not yet been verified.

In late January a video of a Toronto man launching his most powerful roundhouse kick on an oncoming SUV began making rounds, prompting the internet to question his sanity. In a video shared to Instagram, the man—initially behind the wheel of a moving car— slams on his brakes to allow some ill-time jaywalkers to pass. The man then spots on SUV approaching the pedestrians at a reduced speed and deeming himself Superman in the blink of an eye, launches himself from his vehicle and into the path of oncoming traffic. Seemingly unaware that the approaching SUV has spotted the pedestrians and has slowed down to let them pass, the man the launches a kick to the vehicle’s tire before collapsing in pain in the middle of the highway. 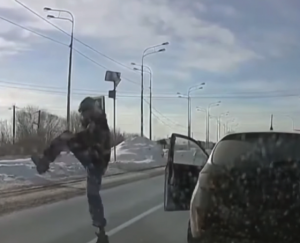 Next time you think you can get sneaky about your vehicle’s insurance, think again, as a Halton Region police officer was forced to have a car impounded after the driver was pulled over twice within 20 minutes, in Oakville, Ontario in early March. On just the first charge, the driver was facing a minimum $5,000 fine, however, thanks to their clearly lacking stealth skills, now faces up to $50,000 in additional fines as well as the potential for a one-year license suspension. 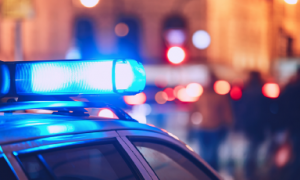 PUT THE BILL ON BELL

About seven months ago, David Rooney received a car wash he never asked for. The high-pressure water excavator the Bell employee used did the job a little too well and left in Rooney $1,500 in the hole for paint repairs to his 2012 Hyundai Genesis. It was an honest mistake. The employee splashed some mud on Rooney’s car and used the highpowered earth-boring tool to try and gently wash away the mess. “There was quite a wash of water, probably 10 feet high,” said Rooney. Rooney assumed that receiving compensation for the damage would be simple, especially considering that the employee admitted he was at fault—but Bell had other plans, Rooney was dragged into a legal battle with the company and Super Sucker Hydro Vac Service; the company hired on Bell’s behalf. Telecommunications companies often have the right in Canada to enter onto a person’s property in order to carry out maintenance deemed essential. However, according to John Lawford, the executive director of the Public Interest Advocacy Centre, often when damage is done on such visits, the victim is often out of luck when it comes to receiving compensation.

THERE’S SPIDERS IN THERE!

The idea may feel a little creepy at first glance, but the science is far from mad. A researcher from the University of Denver is proposing that Alaskan spiders and insects could possess the properties to transform the production of antifreeze. Recent University of Denver research suggests that the natural antifreeze compounds found in some Alaskan spiders and insects, as well as the Antarctic toothfish, could provide natural alternatives to the harmful chemicals used to produce traditional antifreeze products. An effort is now being made to replicate the glycoproteins in the toothfish that prevent its blood from freezing in cold waters, in order to be created into an organic antifreeze compound.