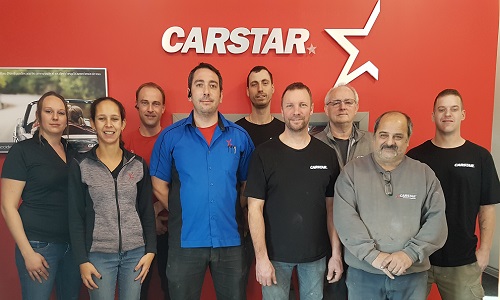 Toronto, Ontario — November 29, 2018 — CARSTAR Levis isn’t your average bodyshop. The rebranded CARSTAR location has gotten off to a blistering start, earning quite the reputation in the province of Québec. The renovated facility has quickly become one of the company’s shining examples of what joining a banner corporation can do for an independent shop. But don’t let the bodyshop’s facelift and new sign out front fool you; the real story behind its success is the dedicated owners who acquired the location.

Sébastien and Maude Labrie purchased the shop in 2017 and haven’t looked back. In their first year as owners the duo managed to double the shop’s previous sales. The accomplishments led to both Sébastien and Maude being recognized as CARSTAR Rookies of the Year for 2018. The secret to their success? Well simply put, they have great chemistry.

“We work as a team in every aspect of our lives so it’s just the logical continuation of our 12-year relationship,” Maude said. “We are very complementary to each other and I think that is a part of our success.”

The couple, who have been together since 2006, have taken their teamwork skills and transferred them to the workplace. Showing up in the early hours of the morning, the two provide a perfect complement for each other, each lending skills in areas where the other lacks. Sébastien, having worked in collision repair for most of his life, handles the daily operations in the shop, while Maude, a former credit agent, is tasked with taking care of customer relations. Maude has also recently been trained as an estimator, further expanding her role at the facility.

“For me, the biggest challenge has been to improve my knowledge about this industry,” Maude said. “I [had] never worked in this industry before but my other administrative and technical experience, along with Sébastien’s experience, made our success.

Sébastien credits his wife’s work ethic and her past professional experiences for giving them the impetus to improve their knowledge of estimating and body repairs. “This gave us the chance to build a solid relation with insurance companies based on mutual trust.”

The shop, which is located on the south shore of the St. Lawrence in Levis, Québec, is as tight-knit as the city itself. Small in size, employing seven workers in total, the shop has embraced a family culture, largely contributing to its exceptional customer experience and on-time repairs.

“We have an amazing team of individuals who are all there for each other.” Maude said.

“Our success comes from our commitment to doing things right the first time and always doing our best in every aspect of the job,”

Sébastien and Maude’s shared goal of going the extra mile is what separates their shop from its competition. In what is now a picture perfect scenario wasn’t always the case, at least when it came to expanding the business. Sébastien had tried for years to persuade Maude to join him in the collision repair world, but for Maude the timing wasn’t right. It wasn’t until Sébastien brought forward the idea of joining CARSTAR that she had started to think otherwise.

“I decided to make the move with Sébastien after several years of discussion,” Maude said. “Joining CARSTAR was the time to do it as he needed help to make it happen. He thought that I was the right person to get into this with him.”

“She made the step and I’m very happy for it,” Sébastien said. “I’m really grateful that she accepted to leave her own career to go with me in this great adventure.”

It’s safe to say that the gamble paid off and then some. Sébastien and Maude have embraced the move to CARSTAR and are talking full advantage of the opportunities brought forth by the organization.

“Being a part of the CARSTAR banner is a great experience,” Maude said. “All the franchisees work as a team and their representative involvement is unbelievable.”

Sébastien adds that the couple is looking forward to getting involved with CARSTAR’s charity work on behalf of cystic fibrosis.

“It’s a special organization and we’re excited to get involved.”

As for what the future holds, well, Maude is optimistic.

“Being together for 24 hours a day is easier than I thought it would be!”