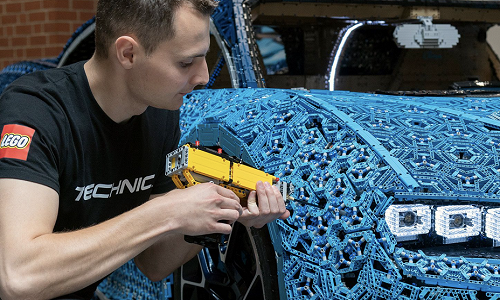 Toronto, Ontario — November 30, 2018 — This Friday Collision Repair has prepared the top five unbelievable stories of the week that we couldn’t wait to share with you! A LEGO built Bugatti, a couple of bear bandits and footage of a slick gadget being used to avoid getting charged on toll roads, plus much much more!

LEGO Telematics has teamed up with Bugatti Chiron to build a completely functional Bugatti Chiron out of LEGO pieces. The LEGO car has a 5.3 horsepower engine, and weighs approximately 1,500 kilograms. Built out of the LEGO facility in Czech Republic, the car had 16 specialists working on the vehicle, which took about 13,000 hours of labour to make. Over one-million pieces were used in total, with the speedometer built entirely out of LEGO.

A 15-year-old who stole a vehicle and then crashed into another car has been arrested. The thief was caught red-handed after he had crashed into another vehicle near Younge-Dundas Square in Toronto. The crash happened right in front of CityNews, where one of the camera men saw the 15-year-old try to flee from the scene. The police caught up the culprit and arrested him.

You should lock your car doors at all times, as you never know who or what will be able to get in there. A North Carolina mother and daughter came back to their vehicle when they witnessed a family of bears helping themselves to the 50 chocolate bars that they had stored inside the car, that was initially meant for a prom fundraiser. The bears ended up causing quite the mess in the back seat, leaving dirt everywhere and puncturing the seats cushions.

A few people in Ohio posted videos on social media of a strange occurrence they happened to see while driving. The footage showed a man clinging to the side of an SUV while it was driving around. From the videos it shows the man held onto the front passenger’s handle and the roof of the vehicle in order to ride along with the vehicle.

A 70-year-old man from Florida installed a clever gadget in his vehicle to avoid getting charged on toll roads. The man has since been arrested for shielding his license plate from toll cameras. A vehicles’ dash cam showed the 70-year-old man’s gadget lowering a black mask over the license plate when he approached the cameras and then raise it up again after. People are saying that this man’s gadget is similar to something that would have been seen in a James Bond movie.