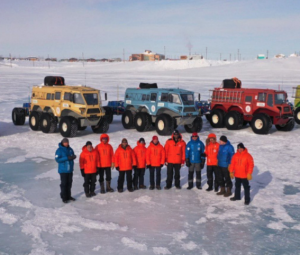 A team blindly embarking on a wintry mission in Nunavut says it’s working to recover a Ford F-150 it lost while traversing the unknown terrain.

The TransGlobal Car Expedition embarked on a 1,110-kilometre journey from Yellowknife, Northwest Territories to Resolute Bay, Nunavut, driving “into the unknown” for about 700 kilometres. In its March 25 update, the team announced it lost one of seven vehicles after it fell through the ice on the way back to Cambridge Bay.

The team did not say which vehicle it had lost but Nunavut RCMP did confirm it was a Ford F-150. Three modified F-150s, along with four amphibious vehicles, were taken on the trip.

The TransGlobal Car Expedition said the reason for the trip was to “prove the feasibility of a drive from Yellowknife onto the Arctic Ocean Ice. The expedition claims it is the first-ever overland wheeled journey from the continental shelf of North America to the High Arctic.

In its media statement, the TransGlobal Car Expedition said losing a vehicle through the ice would inform the safety measures needed for the full expedition. It also said global warming was making travel over ice more dangerous for Indigenous communities and other ice travellers.