Recognizing that it will take all of us to fill the demand for skilled tradespeople in Canada’s automotive industry, General Motors has announced that it will be sponsoring this year’s Young Women’s Initiatives program from Skills Ontario.

The Young Women’s Initiatives program provides direct access to various hands-on skilled trades experiences through events like Young Women’s Career Exploration days where Grade 7-12 girls meet with established industry professionals to discuss the many opportunities open to them in these fields. With this recent announcement, General Motors becomes the sole OEM sponsor of this Skills Ontario program.

“As a woman in trades, I’m proud to work for GM as we dismantle barriers and perceptions that prevent women from pursuing careers in skilled trades and technology,” said Jennifer Cowdrey, electrical/chassis/ HVAC quality engineer at GM’s CAMI Assembly in Ingersoll, Ontario.

“We’re working with Skills Ontario to help empower women to be their own advocates and to pursue what they believe in, working collectively to make work a more inclusive place.” The program is also partially supported by Aurora, Ont. auto parts manufacturer Magna International.

A joint auto theft investigation between the Hamilton, Halton and Niagara police services has led to the arrest of 33 people alleged to be connected to the rising rate of theft in the area.

Project Hot Wheels was launched in late January to combat a 46 percent increase in vehicle theft reported by the Hamilton police over the past year. Police say that by “utilizing intelligence-led policing, analytics on repeat offenders, known target vehicles and hot spot theft areas,” the investigation managed to result in the seizure of 32 stolen vehicles, three firearms, $9,416.20 in cash and $93,000 in cocaine, fentanyl, hash, meth, and MDMA. The value of the stolen vehicles totalled about $508,000.

Ontario is kicking its highways up a notch—very slightly—announcing a permanent 10km/h speed limit increase to a number of 400-series highways on March 29.

The changes come following a 2019 pilot project that boosted speed limits in certain sections of Ontario’s highway system and will be made permanent as of April 22.

The limit increases will affect the Queen Elizabeth Way from Hamilton to St. Catharines; Highway 402 from London to Sarnia; Highway 417 from Ottawa to the Quebec border, as well as from the Kanata area to Arnprior; Highway 401 from Windsor to Tilbury; and Highway 404 from Newmarket to Woodbine. According to the Ontario government, a 2019 poll found that 80 percent of respondents voiced support for the pilot project.

Ontario is also announcing two new areas for a 110-kilometre-an-hour speed limit on a trial basis, on Highway 400 from MacTier to Nobel, and Highway 11 from Emsdale to South River. 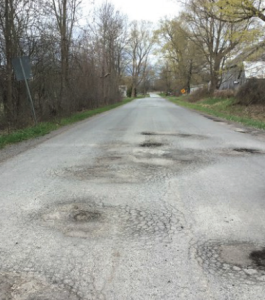 Do you have a pesky pothole that always sneaks up on you on your way to work? Well, it’s the time of year to publicly shame your municipality into doing something about it—the CAA Worst Roads campaign is open through April 19.

“As we kick off another year of the CAA Worst Roads campaign, we are calling on all Ontarians to vote for their Worst Roads today and join the community of drivers, cyclists, transit riders and pedestrians committed to improving Ontario’s roads,” wrote CAA.

The campaign aims to engage Ontario drivers with local and government officials who have the means to prioritize and repair the province’s most severe potholes.

CAA cited in Tuesday’s press release a 2019 Canadian Infrastructure Report Card that found “a concerning amount” of municipal infrastructure is in poor or very poor condition. The report card also highlights spending $1 on pavement preservation may eliminate or delay spending $6-$10 on costly repairs later. The association’s own research also shows that more than 80 percent of Ontarians say poor road conditions such as cracks in pavement (89 percent) and potholes (82 percent) are still the most common issues in their neighbourhoods.

The damage to a vehicle caused by a pothole can range from $300, with some fixes topping $6,000 depending on the make and model of the car, according to the press release.

“As the inventory of vehicles continues to remain scarce due to the global semiconductor chip shortage, more people are now trying to hold on to their cars for longer. Not only can poor roads cause damage to vehicles but they also contribute heavily to the wear and tear of tires and increased fuel consumption which is why the maintenance and quality of our roadways is so important.” said Di Felice.

Nominations for CAA’s Worst Roads are open until April 19.