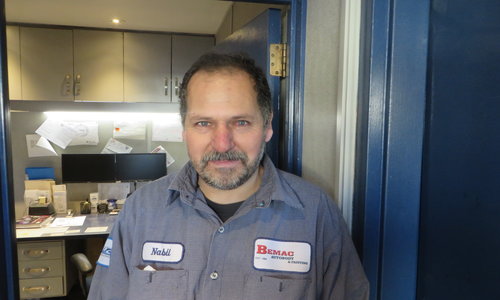 Ottawa, Ontario — January 16, 2017 — Nabil Al-Dabei, a Syrian refugee, has found work as a collision repairer at CSN-Bemac Auto Body in Ottawa after his own collision shop in Syria was destroyed. Al-Dabei and his family came over from the war-torn country about 14 months ago, sponsored by Saint Basil’s Church’s Refugee Committee.

Since the breakout of the conflict in Syria during the “Arab Spring” of 2011, more than 10 million Syrians have been either internally displaced or have had to seek refuge in foreign countries.

Many refugees have been sponsored by church groups, such as the Saint Basil’s Refugee Committee, who sponsored the Al-Dabei family. Nabil’s youngest three children are attending Our Lady of Fatima Elementary School, and his oldest is enrolled in an extended ESL program at Saint Pius X Catholic High School.

Al-Dabei owned a body shop back in Syria, but was forced to leave it behind when armed Islamic militants attacked and vandalized his pace of business and home because he is a Melkite Catholic. As a result of his prior experience in the industry, he is fitting in well at CSN-Bemac Auto Body.

“Nabil is very good at his job,” says Joe Frangione, one of the owners of CSN-Bemac Auto Body. “He’s a great asset to our team.”

In fact, it was his ownership of his own shop that brought him to CSN-Bemac Auto Body in particular. “We were told by the church that he had owned his own body shop, which really interested us.” says Frangione.

New parts are easier to come by in Canada than in Syria, so the shops in that country are more repair oriented than many of the facilities here. According to Frangione, Nabil has been taking the differences in stride.

“In Syria, because parts are not readily available. he did a lot of repairing. But in Canada our industry is a lot more used to replacing to bring vehicles back to OEM specifications,” says Frangione, “When it comes to new technologies and materials he might not have worked with before, such as aluminium, he’s getting training as required. He’s doing very well.”

Despite his decades of experience in the collision repair industry, he had no certifications in Canada as a collision repairer, so he needed to go through quite a bit of training before he could work in a shop again. “We’re quite fortunate that [St. Basil’s] Church introduced us to him. He was eager to work, and we also had quite a lot of help from the College of Trades, who helped to get him registered as an apprentice.”