NAIAS: State of the industry under discussion at Autoline Supplier Symposium 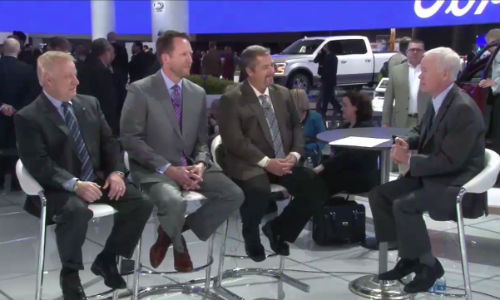 Detroit, Michigan – January 12, 2017 — The North American International Auto Show (NAIAS) got underway in Detroit this week. You can catch up with our previous coverage of the show here. One of the highlights so far was a panel discussion among auto supplier executives that touched on the economic outlook for 2017 and the possibility of a recession.

As way of background, NEAPCO was originally known as New England Auto Parts. In the early days the company sold aftermarket parts but eventually began manufacturing its own parts and is now a leader in drive-trains. In the case of INTEVA, the company was spun out of parts giant Delphi and now makes sunroofs, motors and electronics at 50 different locations in 18 countries. Charles Chesbrough, the economist with OESA, tracks the trends and events relevant to the auto supplier community.

McElroy’s initial question was about growth assumptions for the year ahead. This past year auto sales in North America hit record levels. McElroy wondered, “… if there was some increasing pessimism” in the industry in the wake of the record year.
Chesbrough was the first to respond. He admitted there is some wariness after such a strong year, with many assuming sales will plateau in 2017.

“We’re coming off a record year, so you’d think suppliers would be happy and optimistic after a record year. But I think one of the main issues they’re looking at is that difficulty they see on the horizon. Maybe not for this year, but maybe over the longer term they know there are a lot of headwinds coming. One being slower growth rates on vehicle sales. We’re well past the recovery phase of the last recession so there’s not a lot of growing opportunity in the marketplace. Sales are going to be flat-lining from here. We’re looking at higher interest rates down the road. And that’s always concerning to supplies and consumers. That’s going to threaten the vehicle volumes we’ve seen. That’s not to take anything away from the year we just had. think we’re looking at something similar in 2017 as we had in 2016,” said Chesbrough.

Hopkins followed up. “I understand what Ken says … there are a lot of reasons to be pessimistic. Inventory rates are high. I think inventory rates are the highest they’ve been in eight years. And you can look at the extra incentives are being put on cars to sell them. But I’ll take sales of 18 and a half million. I think it’s more important to take a look at the opportunities ahead of us. Sure, we can’t count on an extra million vehicle sales next year to continue to drive our sales. But this is where it gets interesting. As management and leadership you have an opportunity to say where are the winners going to be, where are the losers …We can separate the winners from the losers,” he said.

Offenbacher suggest that he is, “… cautiously optimistic. There’s really nothing on the horizon that looks cataclysmic. Obviously we’ve got a funny political environment. We’ve got a lot of funny stuff going on with Trump … but the industry is still strong. The products are outstanding. The amount of new launches coming are going to be great. To take Ken’s point, you’ve got to look where you are. We’re working with OEMs across the industry. You’ve got to be on the right product, in the right place. I’m optimistic,” he said.

McElroy went on to ask if it wasn’t possible that the pessimism mentioned earlier in the conversation could change to optimism in the year to come. After all, since the election of Trump, “… there may be more uncertainty but the stock market is off to the races and consumer confidence is way up. Could the next survey show an increase in confidence?”

Fielding that question, Chesbrough said, “It’s possible, but I would say that in terms of trade policy a lot of uncertainty has just been released [as a result of Trump’s election]. And that’s going to be an issue for our members. That’s going to make their business planning a lot more of a challenge.”

Chesbrough went on to discuss another challenge suppliers will have in the years ahead. It’s an issue a lot of collision repair executives will be familiar with. “The ability to find workers is becoming a real challenge,” he said. “The labour shortage has been discussed in this town for a long time. But we asked out member in 2016 about 2018. For about 20 percent of respondents finding enough new people is a real concern. It’s not an issue for everyone, but for some it’s problem,” he said.

Offenbacher followed up those comments by explaining the importance his organization puts on recruitment and training of new employees. “We’re have a strong co-op and intern program. We’ve turned that into a strong college program as well. We’ve been working that from the bottom up and the organization has embraced it. We send these engineering recruits out to the manufactures so they get to see the mistakes and the successes they wouldn’t see if they went straight into their [engineering] job,” he said. “We’ve been very successful with our recruiting program.”

Another question McElroy had concerned the mix of products in the marketplace. “What’s going in the market? It seems there is so much change. It seems like someone threw a switch and people are abandoning passenger cars and going for crossovers. How do you deal with these changes?” he asked.

The answer from the panel was, basically, managers need to be fluid and ready to react to changes in the marketplace. Change is constant, there’s no getting around that. “Management has to build flexibility into the business,” said Hopkins. “You can take change as a negative or you can look at it as an opportunity that you have to go out and execute on. We all have capital tied up in current products. And I think we’ve seen some OEMs get hurt this year. Toyota talked about not having enough crossovers and pickups available. But there’s no great answer. You can’t look into the crystal ball and know what’s coming. You need to be ready to react.”

Offenbacher followed up on that sentiment. “You’ve got to manage your exposure. You can’t really pick the winners and losers. I could look at the new Chevy Bolt and say, ‘Wow. If Elon [Musk, CEO of Tesla] is going to sell 300,000 of his Model Three then General Motors should sell 600,000 of those … but how is it really going to sell? It’s a passenger car and people want the convenience of a larger vehicle,” he said. “I’ve got a lot of grey hair and I’ve seen a lot of these cycles. In the 80s the market changed overnight when Saudi Arabia said they’re not shipping any more oil. At GM they went from 100 days of inventory on Chevettes to three days. The Impala went from three days inventory to 100. It just changed overnight. Market conditions are always changing. It’s a dynamic market. We work with a lot of different OEMs. You have to flex and work your people on alternate products.”

Chesbrough added a note of caution on assumptions about product trends. “I wouldn’t give up on the car just yet,” he said. “I think when we see buying conditions change and the economy slows a bit … when interest rates rise and gasoline price rise and become more expensive … consumers are going to be looking for affordability yet again. And these crossovers and SUVs, and certainly the pick-ups, all are going to be more expensive than a four-door sedan. Consumers may come home again to these types of vehicles.” It’s a good point to keep in mind.

Wrapping up the session, McElroy asked Chesbrough if there was anything else he was warning suppliers about. Chesbrough’s reply was cautiously optimistic. He warned those watching to keep an eye out for a recession. “When I do the charts it’s hard to see anything o the horizon right now that would knock us off this trajectory. What Trump has proposed … spending on infrastructure, lower taxes … that’s going to be great for business and consumers. But we’re nine years since the last recession and when you chart this stuff out we’re about due. Recessions you usually come around every six to eight years. Maybe we’re on another trajectory, that’s possible. But when you see the where the unemployment rates are today–unemployment claims are at a 43 year low, unemployment is low–we don’t stay at these levels for long. It seems that, timing wise, we’re about due [for a recession],” said Chesbrough.

Hopkins followed up. “I think Charlie’s right. There’s an inevitability around the auto industry. It’s cyclical. We’ve heard that since we were little kids. What’s interesting to me is that, while we may be long in the tooth, we don’t know what’s going to happen when ride sharing comes in and autonomous vehicles happen. We don’t know how that’s going to come in. But there’s going to be a change. Whether the change happens to us, or whether we cause the change, I can’t tell you, but you have to be ready for change,” he said.

Offenbacher ended the session on a slighty more optimistic note. “I’m a born optimist. I think the market finds itself. When it changes we know how to adapt. We were just in New York with the bankers on Wall Street had already figured out that there’s going to be a massive recession. They’re convinced of that. I say, ‘Really?’ It happened once in 70 years. Could there be a correction? Sure. But those of us who were around in 2000 have the tools and know-how to react. We’re not lemmings about to jump off the cliff into the ocean. I think the industry is much better equipped to handle change and to handle the dynamics of a changing market,” he said.

NAIAS continues through the rest of the week.