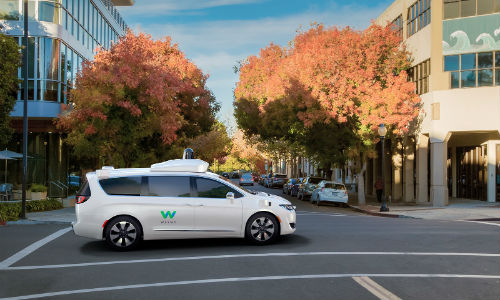 Toronto, Ontario — January 15, 2017 — Here in early 2017 the automated vehicle (AV) story continues to emerge as a major new business story. This week we look into how Waymo’s cars are being kept offline to prevent hacking, a new survey from KPMG that says half of car owners don’t actually want to own cars, proposed rules on vehicle-to-vehicle communication and much, much more!

– Taxi drivers have been fighting against the Uber-ization of their industry for the past two years. Now it looks like they have an even bigger challenge ahead of them in the form of AVs. In a bid to ward off the threat, a, “… lobbying group for taxi and limo drivers in upstate New York wants the state to ban self-driving cars for at least 50 years,” according to a recent report on Forbes. A group known as the Upstate Transportation Association recently sent a letter to New York state government Andrew Cuomo and leaders of the New York assembly that made the demand. According to the report the letter states that, “Anyone who believes Uber will create jobs should also be willing to protect them from automation. If you approve a ride-sharing expansion without a ban on driverless cars, you will be turning new jobs into lost jobs.”

– Another report on AVs from MIT Technology Review states that, “… autonomous car company, Waymo, has admitted that it keeps its cars offline to prevent them from being hacked.” Many have raised concerns about the hackability of connected cars. Self-driving cars will be, essentially, “… large computers on wheels. No surprise, then, that some of them will be kept offline in the name of security,” reads the report.

In addition, the CEO of Waymo told the Financial Times of London that, “Our cars communicate with the outside world only when they need to, so there isn’t a continuous line that’s able to be hacked, going into the car.” It seems their is some way to go yet before AVs can be considered safe. As the report notes, “In 2015, security researchers demonstrated that they could remotely hack into the computer systems aboard a Jeep Cherokee and disable its brakes while a driver was at the wheel. Incidents like that no doubt serve to make drivers—and automakers—nervous about handing full control over to computerized vehicles if they’re connected to the Internet … manufacturers, like BMW and Audi, plan for their cars to communicate with each other and even talk to street furniture, such as traffic signals. That will enable them to, say, merge lanes intelligently, better predict when to brake, or approach junctions at an appropriate speed. It will also, however, require an always-on data connection …

For now, then, the prospect of autonomous cars being hacked remains an open problem. Waymo’s solution, of simply keeping the car offline as much of the time as possible, works for now. But to reap the benefits of connecting cars, it can’t remain the case. That will mean facing up to hackers and finding other ways of improving security, rather than hiding offline.”

– A report on the evolution of in-car control displays from Just Auto notes that, “Consumer electronics is obviously the main driver but the new automotive ecosystem and the wider Internet of Things (IoT) … As the main interface for all vehicle information and entertainment, larger displays and smart surfaces are the main trend transforming the cockpit today.” That is, there are going to be a lot more screens in cars of the future. “Displays will continue to increase in size, but the design studios and the automakers want to differentiate. If everybody’s using the same 8-inch rectangular display, it soon gets boring … It’s important to look for inspiration from consumer electronics and enable products such as curved displays and flexible OLED technology, etc. by making them automotive-grade at the right time … the cockpit is expanding from being a physical space to an interface, raising questions such as, ‘what pertinent information can be displayed on the windscreen?’”

– A survey of car manufacturing executives completed by accounting and consulting giant KPMG finds that, “Half of today’s car owners will not want to own a vehicle and more and more will want self-driving and electric cars in future … As fewer people see the need to buy a car, a majority of automotive executives believe the industry will increasingly focus on making money from peripheral digital services to be used with their vehicles,” according to a report by The Guardian.

Automakers will generate cash off from the data beamed into cars. Recommendations for accommodations or restaurants streamed to drivers could bring in cash and so could streaming fees. Whatever the case, manufacturers will be charging for “access” rather than “ownership.”
According to the report, “The results suggest that producing driverless, electric vehicles to sell to tech firms, such as Google or Apple, that consumers would then pay to use could be a growth area in the industry in the coming years …”

The KPMG report finds that, “… manufacturers thought it was more likely that the prevailing business model in 2025 would be centred on producing a vehicle with technological add-ons … They placed the more traditional production of cars and sale through dealerships second, while selling a connected car then maintaining a relationship with the driver using the vehicle’s connectivity was third.”

Some of the other findings: “About 20% of executives, among them many from India, China and south-east Asia, felt the industry would focus more on selling vehicles directly to tech firms – in particular, those whose brand image is not as strong with the public…Moreover, the report said 74% of executives thought more than half of car owners today would not want to own a vehicle in the future. And 85% of the executives surveyed were convinced their company might make more money by providing the new digital services than by selling cars alone.”

This is going to radically change the way automakers generate revenue. “For the auto industry this implies that pure product profitability is outdated. Carmakers’ success will not be evaluated solely on the quantity of vehicles sold, but on the customer value over the whole lifecycle – especially when the digital ecosystem will be ready for the market.”

– The US Department of Transportation (DOT) issued a proposed rule this past week mandating that light vehicles will have to have, “… vehicle-to-vehicle (V2V) communication … allowing cars to ‘talk’ to each other to avoid crashes,” by early next decade. According to the press release there is, “… an enormous potential to reduce crashes on U.S. roadways …” The rule would, “… advance the deployment of connected vehicle technologies throughout the U.S. light vehicle fleet. The Notice of Proposed Rulemaking would enable vehicle-to-vehicle (V2V) communication technology on all new light-duty vehicles, enabling a multitude of new crash-avoidance applications that, once fully deployed, could prevent hundreds of thousands of crashes every year by helping vehicles ‘talk’ to each other.” The proposed rule would require V2V devices to “speak the same language” through standardized messaging developed with industry.

– A story following up the release of news about the proposed rule on V2V communication notes that the government has chosen the wrong technology for that connectivity. According to a story on Hybrid Cars, “… new federal proposal for vehicle-to-vehicle (V2V) communications comes from a dozen years of discussions, but it may have chosen an unpopular technology.”

According to the report, the new V2V tech will see its launch next year in the 2017 Cadillac CTS. But the story notes that analysts and automotive executives are worried the proposed NHTSA rule us being built around radio-based technology, “… which is known as dedicated short-range communication. Opponents say that technology will be outdated by the time the new rule takes effect in the market.”

Most in the industry seem to support the use of newer cellular technology according to the report. “The proposed rule will need cities and states to support the roll out of dedicated short-range receivers on highways and intersections that would exchange information with connected cars. The DOT has created test sites around the country, but there are serious questions over who would fund the proposed infrastructure … [Experts claim] the solution is already in place with the network of cell towers already in place to interconnect mobile phones … The cellular model holds the interest of a few automakers, especially its next version. The next generation Wi-Fi technology for cellular networks coming out, 5G, has gained enough support from Audi, BMW, and Daimler to forge an association with telecom companies Qualcomm, Huawei, Ericsson, Intel, and Nokia. The alliance is studying the potential of 5G networks for future vehicles,” according to the report.

– An article appeared on Business Insider this week noting some of the, “… self-driving car milestones to look out for in 2017.” Among the predictions: “General Motors will look to gain an advantage in the self-driving car space by conducting tests in snowy conditions.” The story notes that the automaker has, “… a fleet of 40 autonomous cars that are also being tested in San Francisco and Scottsdale, Arizona.” But GM CEO Marry Bara, “… has been vocal about the importance of testing in difficult road conditions like snow, while many in the space still have a long way to go to prepare their cars for inclement weather.”

Another of the milestones in the AV space expected in 2017, “… will be when a self-driving Tesla drives itself from Los Angeles to New York … Tesla began installing new hardware in Tesla cars that improves the vehicles self-driving ability and will allow the cars to become fully autonomous in October … To demonstrate the technology, Musk said a fully self-driving Tesla will drive itself from Los Angeles to New York before the end of 2017.”

“In principle [the driver] would have had to pull off the highway several times an hour to clean the sensor if he wanted to keep using the feature (he turned it off instead).” According to Abuelsamid, “The slop and mess of winter driving creates an insoluble problem for self-driving cars anywhere where it snows regularly … It doesn’t matter how cutting-edge the radar and sensors that self-driving cars use to see is — if they’re covered with slush, salt or grime they can’t see, and they can’t work if they can’t see.”

The source goes on to relay a story about sitting in a, “… Kia Sedona, which comes equipped with parking sensors, in a parking lot in Michigan on a snowy day. There was nothing moving around the vehicle, but the sensors thought otherwise. ‘There were big, fluffy snowflakes, and they detected the snowflakes, and decided that there was some sort of obstacle all the way around the vehicle. It was setting off the audible alert that you get when you’re about to back into something, or getting too close to another object … Once you start driving, if you want to use the autonomous capabilities you’ve got to keep them clean. If your LIDAR sensors, or your radar, gets covered in salt, the car is not going to be able to drive itself. It doesn’t matter how sophisticated your software is – it’s just not going to work … You’re not going to have autonomous vehicles running around Toronto in the wintertime in 2020.”

– A report on Kingston Region this week notes that the, “City of Kingston is making plans for the day when self-driving cars arrive on local streets … Councillors approved a motion to collaborate with other municipalities in ‘research, testing, policies and infrastructure development’ – all necessary to support automated vehicles (AVs) in Ontario.” The councillor who introduced the motion, “… wants urban planners to reflect the impact of AVs in the next update to the city’s Transportation Master Plan.”