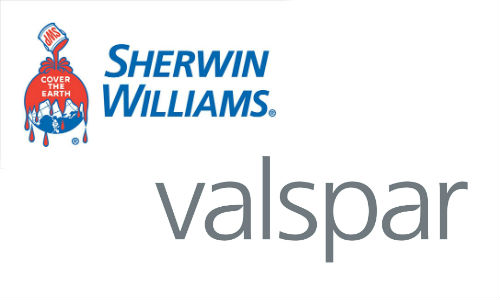 Cleveland, Ohio — March 21, 2016 — Consolidation in the finishing business took a big step forward as news broke that Sherwin-Williams will acquire Valspar Corporation for $113 per share or about $11.3 billion cash. The deal has been unanimously approved by the boards of directors at both companies. Both Sherwin-Williams and Valspar are major suppliers of automotive refinish coatings, supplying products to numerous body shops and collision centres throughout the world.

The transaction is expected to close at the end of the first quarter of 2017. That is assuming Valspar shareholders vote in favour of the deal. A press release from Sherwin-Williams quoted John G. Morikis, President and Chief Executive Officer of The Sherwin-Williams Company, as saying that, “Valspar is an excellent strategic fit with Sherwin-Williams. The combination expands our brand portfolio and customer relationships in North America, significantly strengthens our global finishes business, and extends our capabilities into new geographies and applications, including a scale platform to grow in Asia-Pacific and EMEA [Europe].”

“Customers of both companies will benefit from our increased product range, enhanced technology and innovation capabilities, and the transaction’s clearly defined cost synergies. We have tremendous respect for the expertise and dedication of the Valspar team and we are excited about the opportunities that this combination will provide to both companies’ employees,” said Morikis.

He also noted that Sherwin-Williams will continue to be headquartered in Cleveland and that the company intends to maintain a “significant” presence in Minneapolis where Valspar headquarters are located.

Gary E. Hendrickson, Chairman and Chief Executive Officer of Valspar, was quoted as saying that, “We believe that Sherwin-Williams is the right partner to utilize our array of brands and create a premier global coatings company.”

The new company will certainly be large, with approximately 58,000 employees around the world. The deal is all-cash and is valued at about $9.3 billion, or $11.3 billion including debt.

Not surprisingly, shares in Valspar took off Monday morning, rising to $104.50 per share by midday, a mighty 24 percent advance over the closing price on Friday. Shareholders of Valspar still have to vote in favour of the deal if it’s going to go through, but considering the remarkable premium the deal offers over the current share price, that seems likely. Even with the 24 percent advance in the share price since Friday, the current price of $104 per share is still far below the $113 per share being offered by Sherwin-Williams. Nevertheless, as is always the case with these deals there are debates about whether it’s a deal or a steal.

Commentators on one site were typically split. One commenter, pointing to the “30x earnings” being spent by Sherwin-Williams makes this a “brilliant” deal for Valspar shareholders. Another commentator took the opposing view, suggesting “the price is low … It should have been at least $130 … This is a steal for Sherwin.”

An analyst that follows the industry noted that the share of business that Sherwin-Williams derives from the US and Canada represents 82 percent of the company’s sales. The addition of Valspar, with significant operations in Asia and Europe, will see the “footprint” of North American business drop to about 76 percent. “[The deal] gives us the scale and platform” to expand in Europe and Asia said Morikis.

Dmitry Silversteyn of Longbow Research was quoted in a report as saying that “the plan is very attractive for Valspar shareholders, and should be good for Sherwin in the long run. Valspar is lean, but the combined company should save on corporate overhead, distribution and raw materials. Valspar’s No.1 position in coatings for packaging is a big attraction, as is the company’s foothold in China.”

The deal appears to put Sherwin-Williams on a similar financial footing to rivals AkzoNobel and PPG. The Wall Street Journal noted that the merged company would have had revenues in 2015 of $15.6 billion. In 2015 Akzo Nobel had sales of about $16.7 billion, while PPG posted 2015 sales of $15.3 billion.