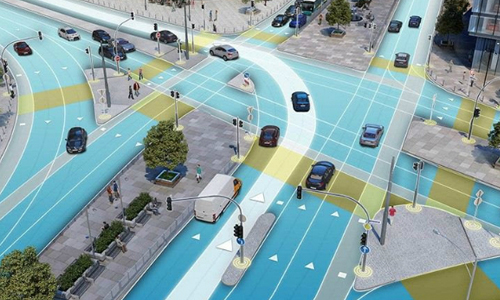 Berlin, Germany — June 23, 2015 — Nokia subsidiary tech company HERE has published an interface specification to define how sensor data gathered by vehicles on the road can be easily shared by car-based computers. The release of the specifications is a bid to accelerate the evolution of connected-car technology and avoid the hassles that the adoption of competing standards would create.

There is a fascinating future unfolding in the auto industry. The possibility of sharing car sensor data between vehicles and having that data “in the cloud” available for all to use would allow a fascinating number of new applications to arise. Cars could warn each other about obstacles on the road. Updated, real-time maps could be generated.
But this new and fascinating future will only come to be if cars can share data. In a bid to help facilitate a common data standard, HERE has made its data specifications available through a creative commons license. The hope is that one set of protocols will become standard across all vehicles. A common standard would allow all the data produced by all cars to be pooled, processed and analyzed quickly to create a detailed live view of road and traffic conditions.
“Your car generates a wealth of data about road and traffic conditions which will be very helpful to other cars driving behind you,” says Dietmar Rabel, Head of Product Management at HERE. “By uniting around a single data specification, we can improve our collective abilities to gain a better overall understanding from the data collected. It will mean fewer accidents and less time spent in traffic. It also moves the industry closer to the goal of cars that can drive themselves.”
According to a recent forecast from automotive technology research firm SBD, by 2020 there will be some 33 million vehicles sold annually with built-in connectivity. These vehicles will generate more than 163 million terabytes of data each year via dozens of on-board cameras and sensors. When shared across the road network this data could be utilized by vehicles to generate an awareness of road conditions beyond the reach of the sensors in any one car. In order for this data to be efficiently used that data should pass through the cloud in a standard format
Rabel talks about the critical mass needed for the system to work in a new publication on the HERE website. “If an OEM is only in a couple of thousand cars across Europe then a vehicle might only pass a certain location every two weeks and you can’t do any real-time or near to real-time processing or change detection with such limited data,” he says. “You have all these different car makers that are working towards connectivity and we can only reach this critical mass by collaborating and sharing data. There is not a single car maker that can do it by themselves. To integrate various input will be essential to define a standard.”
The publication of the HERE sensor data ingestion interface specification is intended as the starting point of an industry discussion, says Rabel. “We will invite the key industry players to have a joint discussion about how to move forward with the implementation and use this as a starting point.”
Rabel says he understands there are concerns about privacy. But the benefits of building a data system that takes into account individual vehicle IDs are too great to pass up. “In the interface specification we are defining that vehicles don’t send individual vehicle IDs so they aren’t traceable. This means that if the vehicle is sending some data today and then the next day, we will not know that it is the same vehicle. We would be aggregating across many submissions but not across a single individual. “
He suggests the company is also “primarily looking for data submissions when something happens as opposed to permanent monitoring of a vehicle.”
Here’s to avoiding the Beta/VHS debacle in the age of the connected car.