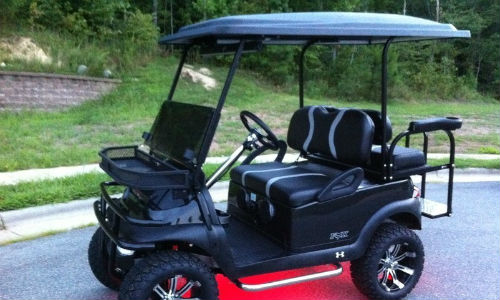 Toronto, Ontario — March 2, 2017 — This week’s Friday Fun takes a look at the recent bust of a chop shop for golf carts, the trouble with simply doing away with NAFTA, a body shop manager accused of bilking his employer out of thousands of dollars and much, much more!

– The immediate threat of a rapid “tearing up” of NAFTA seems to have subsided a bit. Canada seems to be staying out of the crosshairs of the Trump administration, which is, admittedly, distracted by any number of other issues now. Even so Justin Trudeau made a point of sitting down with Canadian auto part makers last week to discuss strategy going forward.

– Speaking of NAFTA, a story in Foreign Policy notes that the, “US and Mexican auto sectors have become so intertwined since the inception of the North American Free Trade Agreement that the industry itself is baffled as to how it would wean itself off the brisk cross-border trade in car parts.”

President Donald Trump has vowed to renegotiate the 23-year-old trade pact, of course. But according to the FP report it might be impossible at this point to untangle the US car sector from the North American one. “The automotive industry is at the heart of US-Mexico trade —and not just in finished vehicles. Steering wheels, dashboards, circuits, and other car parts zigzag across the borders of Canada, Mexico, and the United States many times before ending up in a vehicle in Detroit or Monterrey, Mexico. Disentangling those complex international supply chains could imperil the industry, more than a dozen industry participants and experts told Foreign Policy … Many firms, and the auto industry itself, can’t trace the routes of the components they produce beyond their tiny slice of the supply chain. A generation after the landmark trade deal went into effect, US automakers don’t know how they would turn back time,” according to the report.

– A fascinating story appeared in the Daily Mail this week. According to the story a “whistle blower” claims he was, “… fired from Ferrari after he discovered it tampers with odometers on its multi-million dollar sports cars so mileage appears lower than it is–and wealthy owners can resell at higher prices.” The story goes on to claim that long-time Ferrari salesman Robert “Bud” Root sued a Ferrari dealership in Palm Beach after it fired him when he found out about “The Deis Tester” (a device that can roll back the digital odometers on Ferraris). According to Root, the practice can only occur if Ferrari headquarters greenlights it electronically. According to the story, “Ferrari corporate is named in the lawsuit since the odometer device cannot function without the blessing of Ferrari in Italy.” Root also claims that Ferrari of Palm Beach managers are, “… engaged in a conspiracy with buyers to avoid paying state sales taxes, which can reach $100,000-plus.” The story notes that, “David Brodie, Root’s lawyer, is preparing a class action lawsuit against Ferrari that would gather all the owners in the US who believe their cars were tampered with.”

– A former body shop manager in the US is accused of bilking an auto dealership out of thousands of dollars by pocketing payments for jobs listed over Craigslist. “The Columbus Police Department said 40-year-old Richard M. Clark was charged Tuesday with one count of felony theft worth more than $10,000, one count of misdemeanor theft and five counts of felony fraudulent writings,” according to a news release. “Columbus police had been investigating Clark for three weeks in connection with a reported fraud. Clark was the body shop manager at a local auto dealership but was fired Feb. 8 when management noticed irregularities in record keeping. Investigators said they found Clark was running ads on Craigslist seeking auto body repair work. He then booked the work at the dealership but didn’t run the repairs through the dealership system.” Police also said Clark was, “… manipulating the payroll system to pay employees with dealership funds for working on the Craigslist-booked jobs. Clark was paid in cash or personal checks made out to him for the work,” according to police. “Clark also created work orders with names and other information on them that were intentionally false, according to the report. Police were able to eventually track down some of the vehicle owners during the course of the investigation.

– Apparently there is such a thing as a chop shop for golf carts. According to a story in The Press Enterprise, “Communities in the Palm Springs area of Riverside County are renowned for their golf resorts, so it’s not a surprise someone would capitalize on the phenomenon by turning to crime.” The report notes that law enforcement officers earlier this week arrested a resident, “… on suspicion of stealing golf carts and operating a chop shop in which stolen parts would be resold or used to craft customized carts.” The cart thief was also charged with possessing stolen property and methamphetamine, according to police. “Officers determined a High Desert resident had purchased the stolen cart through a Craigslist ad and the San Bernardino County auto-theft task force recovered the cart, a custom built vehicle valued at $17,000,” according to police. Once they raided the shop, “… officers uncovered another custom cart valued at $15,500.”Okay, now we understand why there’s a chop shop for these things.

– A big story in the business press this week seems to confirm the rising cost of distracted driving. Several business news organizations (including Bloomberg) reported that the US branch of State Farm Insurance, “… lost more money insuring cars last year than it ever has in its 95-year history.” The company incurred $35.8 billion in claims. Combined with the costs of running its auto insurance business, “State Farm lost $7 billion for the year in that segment,” according to a story. That amount was 63 percent higher than its $4.4 billion auto underwriting loss in 2015. Blame it on distracted driving.

It is not just State Farm that is suffering, however. “Allstate suffered its greatest percentage of auto insurance client defections in at least 15 years after two years of substantial rate hikes,” according to a report by Bloomberg. “U.S. insurers have been pressured by rising costs on auto policies as smartphones distract drivers and repair costs climb. Travelers said last month it had begun to increase auto premiums because of higher expenses, following Allstate Corp. and Berkshire Hathaway Inc.’s Geico.”

– Aviva’s UK arm is offering cheaper car insurance if clients move into one of the company’s pension plans. The thinking is that, “Pension savers tend to be safer drivers and should therefore get cheaper car cover.”

Aviva’s statistics show people who save regularly for retirement are less likely to have an accident or claim for a stolen vehicle. A report notes that the company, “… spotted the trend when it analysed claims data for customers who have both a pension plan and motor cover with the firm.”

– Also in Britain: One of the country’s largest insurers, Admiral, has decided to use social media to, “… analyse the personalities of car owners and set the price of their insurance.” According to a media story, “The unprecedented move highlights the start of a new era for how companies use online personal data and will start a debate about privacy … Admiral Insurance will analyse the Facebook accounts of first-time car owners to look for personality traits that are linked to safe driving. For example, individuals who are identified as conscientious and well-organised will score well … The insurer will examine posts and likes by the Facebook user, looking for habits that research shows are linked to these traits. These include writing in short concrete sentences, using lists, and arranging to meet friends at a set time and place, rather than just ‘tonight’ … The rapid growth of social media and personal technology has given insurance companies and employers swaths of data they can access to analyse customers or employee behaviours.”

– BMW has launched a suit against the owners of an autobody shop in California they claim has been selling counterfeit goods. According to a report, “BMW of North America LLC and Bayerische Motoren Werke AG filed a complaint … in the U.S. District Court for the Northern District of California against K VIP Auto Body … alleging trademark infringement and other counts … According to the complaint, the plaintiffs allege that they have suffered injuries on their reputation, business, and goodwill, caused by defendants’ wrongful conduct of manufacturing, copying, exporting, importing, advertising, promoting, selling and distributing counterfeit and unauthorized products, featuring plaintiff’s registered trademarks.”