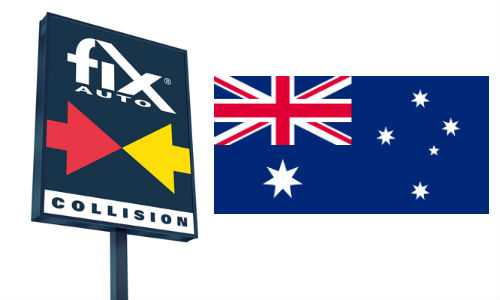 Sydney, Australia — August 3, 2016 — Fix Auto has announced it has identified the collision repair facilities that will form the founding membership of Fix Auto Australia.

Collision Repair magazine reported on the series of repairer clinics Fix Auto planned to hold in Perth, Adelaide, Brisbane, Melbourne and Sydney in November 2015. At the time, Fix Auto World President Steve Leal was quoted by Australasian Part & Panel as saying “”Fix Auto is bringing its proven collision repair model to Australia, with plans to bring repairers together under one strong brand and develop a network of highly efficient, independently-owned franchise locations.” For more on this, please see “Fix Auto heading down under.”

The clincis took place between January 27 and February 4, 2016. With the addition of the Australian network, Fix Auto will operate in six countries. The company already has a significant presence in Canada, the US, Turkey, France and the UK.

Leal outlined the network’s objectives in an official press release: “Fix Auto’s objective over recent months was to evaluate the Australian collision repair market and assess the interest it carries in a partnership-based model like Fix Auto’s. The response has been very positive and we are thrilled to move forward with these very first Fix Auto Australia members.”

According to statistics from the International Bodyshop Industry Symposium (IBIS), the Australian collision repair sector has a market value of approximately $7 billion CAD. Collision Repair magazine is Canada’s exclusive Media Partner for IBIS.

Also according to information from IBIS, the Australian repair landscape has undergone dramatic changes since the start of 2015. There have been two major catalysts for this change. The first is the adoption of insurer approved repairer networks, similar to the Canadian concept of direct repair partners (DRPs). The second is the aggressive consolidation strategy of one of the networks already operating in that country, the AMA Group. The AMA Group merged with the largest national repair chain, Gemini, in September 2015.

The IBIS report notes that the major trends in Australia are consolidation and a move to larger, higher-volume repair facilities. It sounds very similar to some of the changes we’ve seen in the Canadian market in the last decade.

“We are looking for shops that are ready to embrace change and look toward the future of collision repair,” says Leal. “I am confident in the quality of the shops that have and will continue to join our network, and know that our new Fix Auto Australia members possess the entrepreneurial spirit and innovative mind for which we are known.”

“With upcoming strategic hires, a search for key members of our local team to support operations, as well as ongoing discussions with global and local supply partners, we are setting up Fix Auto Australia with all the resources to become Australia’s premier collision repair solution,” says Lingham.

The two largest MSOs currently operating in Australia are AMA incorporating Gemini Accident Repair Centres and Suncorp’s insurance company owned Capital SMART network. At the close of 2015, AMA had about 70 sites, and Capital SMART had just over 30 locations. Canada’s national networks typically have over 200 locations.

“Adding Fix Auto Australia to the Fix Auto network promises to strengthen our franchise family and cement our position as the leading global collision repair franchise brand,” says Lingham. We look forward to sharing more news as we prepare for a formal launch into the Australian market.”