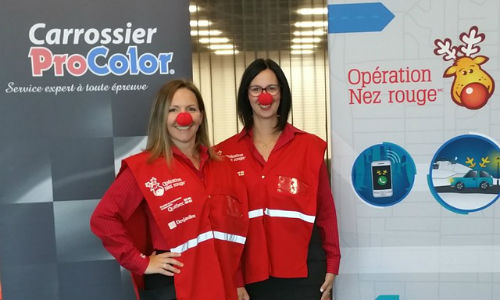 Operation Red Nose was created in September 1984 by Jean-Marie De Koninck. The non-profit organization’s mission is to promote the adoption of responsible behaviour in all impaired situations by offering an accessible and confidential designated driver service provided by and for the community.

Operation Red Nose doesn’t encourage or condemn alcohol consumption. Instead, the organization aims for a more preventive approach for its campaign to raise awareness about the importance of opting for responsible driving.

In support of the organization, Carrossier ProColor will provide financial support to Operation Red Nose to contribute to the success of its awareness campaigns, including a sponsorship of $5,000 in prizes that will be drawn among customers who respond to the satisfaction survey following the use of the designated driver service.

“We are delighted to offer our support to Operation Red Nose,” said Mary Jayn de Villers, Director of Communications and Marketing at Carrossier ProColor. “As this year marks our 15th anniversary, we were looking for a unique opportunity to stand out as a socially responsible organization. A partnership with Operation Red Nose was a perfect fit for our mission by enabling us to bring our support to the communities we serve across the province.”

In addition to its financial contribution, Carrossier ProColor will conduct its own mobilization campaign, entitled “Carrossier ProColor Wants Time Off for Christmas.” The campaign will be aimed at the network’s collision centres to solicit their participation as volunteers with their Operation Red Nose local headquarters.

“With 158 collision centres across the province, we are well positioned to do our part in supporting Operation Red Nose’s mission to allow everyone, ourselves included, to take full advantage of the holiday season,” said de Villers.