We The North – Muhammad Sidhu’s climb to the top

“We interact with a wide spectrum of vehicles, because we have the expertise.”
– Muhammad Sidhu, general manager of Assured Mississauga North

When Muhammad Sidhu and his family made the move from Pakistan to Ontario, Sidhu took a risk anticipating success in the collision repair realm as he knew the automotive industry played a large role in Canada’s economy “Honestly, when it came to Canada, my friends were asking me I was going to do. So, I said, ‘I’m going to get my hands dirty,’ Sidhu told Collision Repair. “I wanted to become an automotive painter, but others told me that, if I want the chance to advance my career, I should aim for a position in the head office.”

On a personal level, Sidhu wanted to find a way to connect with the community and help people through the sometimes-stressful process of remedying a collision.

Prior to moving to Ontario, Sidhu secured a role at a small collision repair facility—Raven Auto Body—where he was sent to school for estimation and collision repair. While in school, he continued working full time at the body shop, and eventually, his hard work paid off—Sidhu was promoted to Front Office Coordinator. Raven was small and had very little staff—a site reminiscent of your traditional ‘mom and pop’ shop. While working at Raven, Sidhu heard rave reviews about Assured Automotive, which boasts more than 90 collision repair facilities throughout Ontario and is a subsidiary of the publicly traded company, Boyd Group Services, also known as one of the largest operators of non-franchised collision repair centres in North America.

Incidentally, just across the street from Raven was an Assured facility—the Mississauga East location.

“Every insurance appraiser spoke highly of them and so, it motivated me to apply which lead to a meeting with Keith D’Silva and Derek Florczyk,” says Sidhu.

When Sidhu was hired with Assured Automotive, he started as a customer service representative (CSR) at the front of the shop, which helped him immensely with his people skills. Eventually, Sidhu learned exactly what was needed to diffuse situations, becoming an integral part of the shop’s success.

As time trickled on, Sidhu’s mentors kept an eye on him, continually throwing tasks his way to challenge him—such as estimator production. His ascent to his current role saw him develop his skills across four of Assured’s locations to evaluate how he would adapt to change and different working environments.

The team recognized his demonstrated strength in a management role, and Sidhu was promoted to manager of Assured Brampton South. Three years later he was offered the opportunity to manage a second shop in the region, Brampton North. After five years of managing the two stores, Sidhu was promoted to general manager for the corporate head office of Mississauga North as of February 2020.

Then COVID-19 hit, Sidhu had to act quickly to refocus his business’s efforts. When the pandemic put Canadians in a panic, collision repair shops had to rethink how they could continue business during an economic shutdown. Not only that, shops had to start thinking about what the automotive industry may look like in 2021, and beyond.

“We have taken this responsibility seriously by encouraging social distancing and developing touchless processes to make our clients feel safe when doing business with us, as well keeping our people safe when they come to work,” says Sidhu. “For our customers, we created our ‘Drop & Go’ options, which highlight four ways which we can service a customer; scheduled appointments, contact-free curbside estimates, online estimates and home pick-up and delivery, where available. To ensure the safety of our customers, we have a sterilization process which is part of our final QC process which every vehicle must follow.”

Josh Strong, marketing manager for Assured Automotive, continued: “To make sure everything was safe we developed a very robust cleaning regimen—we basically have a full-time staff member dedicated to cleaning duties. This is a very big facility, so it’s a full-time job to have someone disinfect the cars, but it’s also keeping the shop safe for all our workers as well. We do everything from wiping every light switch in the building three times a day to doing the same any high touch points.”

However, unlike countless Canadian businesses, the Assured Mississauga North team was never concerned—they say the shop is already light-years ahead of most. “It’s safe to say that it’s a very busy spot. It’s one of our higher volume stores—probably our second biggest location in our network of stores” says Strong.

Mississauga North takes pride in providing a full range of services, explains Sidhu. Of course, they offer the conventional vehicle repairs, but with technology ramping up in the auto sector, Sidhu wants his shop to stand out. “We have experienced all makes and models from the most common family vehicles to super luxury vehicles like Bentley, Rolls Royce and other high-end super luxury cars,” Sidhu says. “We also engage the sports car segment like Lamborghini, Aston Martin, Maserati and McLaren. 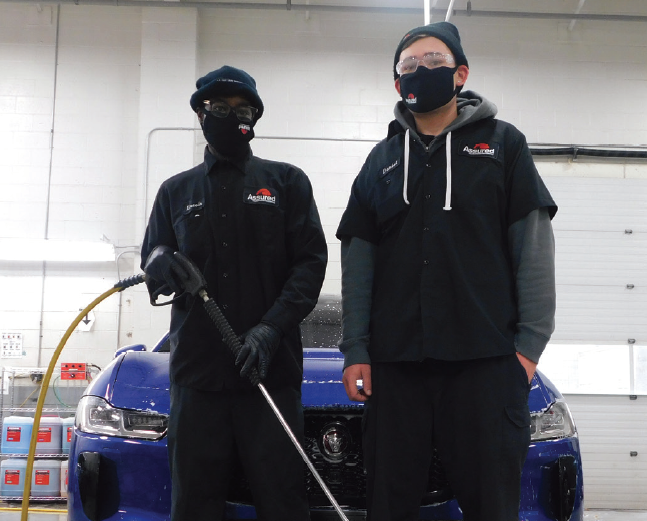 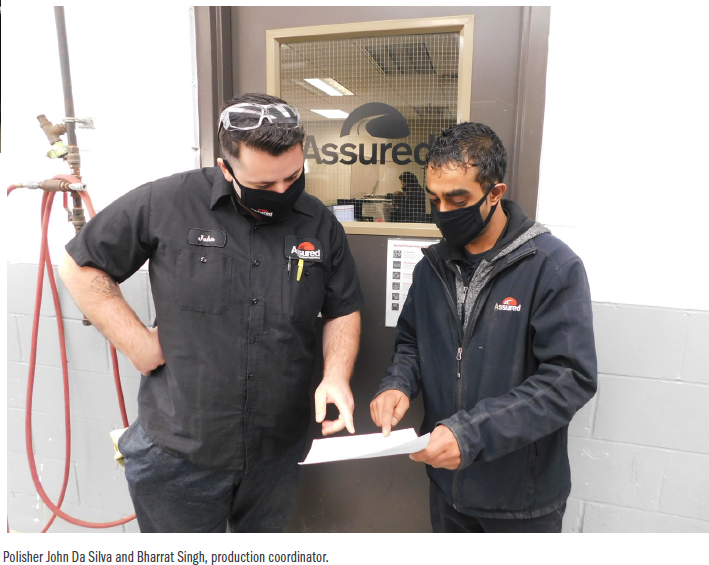 We have a very prestigious account with Grand Touring Automobiles; we interact with a wide spectrum of vehicles, because we have the expertise.”

One of the recent new upgrades made to the shop is an aluminum room, says Strong. “We have two dedicated mechanical bays, because we do in-house mechanics here, and a dedicated aluminum room–which many facilities are not equipped with.”

As calibrations and ADAS calibrations continue to become more and more important for collision repairers to understand, Assured and the Boyd Group recognize the importance of compliance and continuous improvement. The Boyd Group takes pride in supporting training so our shops can achieve I-CAR Gold Class certification—a top international standard. Certain measures taken by Sidhu to improve Assured Mississauga North, made the shop recognized as a top collision centre in Ontario. “We are very committed, and not just to the technicians, but in the back office, too. We invest in people and we have state of the art equipment. Our staff have the tools to complete the repairs at the international standards,” he explains. “Not only that, with the vehicles becoming more complicated nowadays, and technology advancing every single day, we encourage our staff to use all the available data to identify the issues and take the corrective measures and actions accordingly.”

“To try and go and take somebody from another shop and expect that they’re going to be a great technician is a fool’s errand. Occasionally you strike gold, but often not,” says Strong. Since first moving to Canada, Sidhu says he has always been a hard worker, no matter the situation.

And as COVID continues, Sidhu says he is hugely proud of the way his facility managed the challenges pertaining to the pandemic so far. “We supported our customers, our staff, by leading by example; we showed them our commitment and took social responsibility. I’m proud of the fact that our leadership encourages us to get involved in the community, and to be the positive face of the change,” says Sidhu. Sidhu says he is beyond honoured to manage Assured’s flagship location, and helping people get back to safety on the road.

“I love the challenge of repairing many kinds of cars for many different kinds of people and meeting and exceeding customer expectations, it is an absolute honor that we are a trusted collision centre—that people just give us the keys and say, ‘Hey, you go fix my car. And at the end, we receive that big thank you.’” 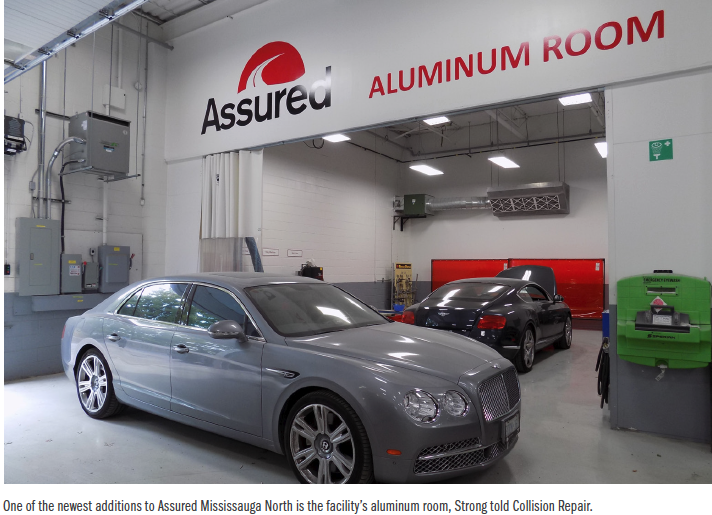 PrevPreviousPutting on Airs: AirPro Diagnostics approved by GM for diagnostics and servicing of ADAS equipment
NextWinter Is Coming: Are Canadians skilled winter drivers?Next