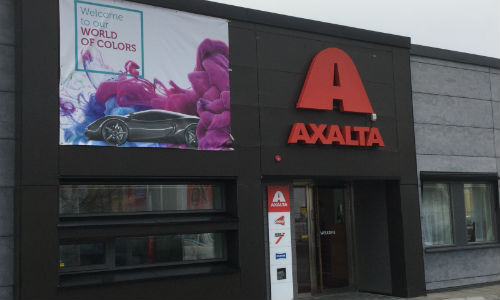 Toronto, Ontario — January 30, 2017 — Check in each Tuesday for updates from companies operating in the auto claims economy as well as market and economic trend reports. This week we look into a record breaking week for the Dow Jones, potential bumps in the road for Sherwin-Williams’ acquisition of Valspar and much, much more!

– Last week the Dow Jones index broke through the 20,000-point mark for the first time. It is a new record high. RBC Capital Markets put out a report last week suggesting that the record levels are not just a result of the so-called “Trump effect” driving markets higher, but are a result of the solid projections for 2017 earnings being reported by companies. “Corporate guidance suggests that this better-than-normal trend is the result of an improving backdrop, as opposed to proposed pro-growth policies,” said RBC’s chief equity strategist Jonathan Golub. “This is consistent with the recent improvement in consumer and business confidence surveys … and other economic indicators. Importantly, rising interest rates and commodity prices (including Energy) are contributing to a more stable outlook.” The report goes on to note that, “Trump’s pro-growth policies including corporate tax cuts and deregulation have yet to be outlined in detail, and as a result companies have been reluctant to factor them into their outlook …”

– Royal Bank of Canada increased its target share price for Uni-Select from C$35.00 to C$36.00 in a research note published on Wednesday morning. The brokerage has an outperform rating on the stock according to a report. The company announced it will release full year earnings the morning of February 9.

– PPG announced that Vincent Morales will be its new Chief Financial Officer and Vice President. Morales will replace Frank Sklarsky, effective March 1, 2017. Sklarsky’s compensation was $3.3 million, which included a salary of $678,333 and stock-option awards of $599,981. Morales has worked for PPG in different capacities for more than 30 years.

“The Axalta Refinish Academy … is designed to be a welcoming facility where refinishers can enhance their skills using the latest products and equipment in a modern environment. Everything has been developed to ensure that the refinishers who train here not only receive the best possible course experience and return to their body shops with self-confidence and skills, but also learn how to work as efficiently as possible,” said Gilles Navez, Marketing & Strategy Director for Axalta in Europe, Middle East and Africa. The Axalta Refinish Academy Nordic has been specially designed for maximum energy savings and to meet future environmental requirements.
Axalta will host a conference call to issue its fourth quarter and full year 2016 financial results before markets open Wednesday, February 8, 2017.

– A report in the investing press notes that LKQ is currently trading about $31.00, but that, “… lots of equity research firms seem to have a target price set on the stock. The median one-year price target of 11 analysts covering the company is $37.00, which suggests the stock could still rise over 15 percent. The highest analyst price target is $48.00, which implies a rally of 48 percent. And a quick view of analyst notes show that three are rating the stock a buy while eight rate LKQ a strong buy.”

– Auto Canada enjoyed a big one-day jump in its stock price on January 24, when shares in AutoCanada finished up 5.5 percent on the day. The company ended up trading a bit above $26 a share.

– AkzoNobel will invest more than $10 million over the next five years to expand production at its facility in Nashville, Tennessee. The company hopes to create approximately 70 manufacturing and professional services jobs. “With Nashville’s focus on sustainability and responsible growth, we have found a great match between the purpose and mission of our company and the community of Nashville. We look forward to growing with Nashville and welcoming new employees to our organization,” said AkzoNobel North America President Johan Landfors, in a press release.

– Trump advisor and billionaire investor Carl Icahn has taken full ownership of auto parts supplier Federal-Mogul Holdings Corp. Icahn bought the rest of the company from Federal-Mogul’s second-largest shareholder Gabelli Asset Management Company Investors according to a report from Tire Business. “The deal, announced Jan. 19 by Icahn Enterprises, ends a nearly year-long quest for Mr. Icahn to acquire the supplier,” according to the report. Icahn already owns the Pep Boys chain of auto part stores. Some think Icahn, “… plans to use the parts retailer as a mainline for Federal-Mogul parts … Pep Boys’ 800 stores, paired with Mr. Icahn’s other aftermarket retailer, the 278-location Auto Plus, would make up the fifth-largest retail auto parts chain in the U.S.”

– Debt-rating firm Moody’s released a report this week that claiming, “… debt-fueled consolidation will continue among Europe’s auto parts suppliers into 2017.” According to the report, “Limited organic growth prospects and cheap debt are fuelling a pan-European consolidation race among leading European auto parts suppliers Dakar Finance S.A., Alliance Automotive Holding Limited and LKQ Corporation as they turn to mergers and acquisitions to drive growth and boost market share.” According to the Moody’s analyst, “Autodistribution, AAG and LKQ are leading the consolidation charge in Europe having already gobbled up a number of small and mid-sized players in different countries, and we expect them to continue to use historically cheap debt to finance more acquisitions in 2017-18.” The report notes that, “In 2017, organic revenue growth in the sector will be limited because despite the rising average age of cars in circulation and increasing technological complexity of parts, the increased quality and durability of parts and stagnant or declining average mileage, result in less wear and need for repair … In addition, car manufacturers and specialized web dealers are starting to pose a competitive threat to the independent automotive aftermarket. In July 2016, Peugeot S.A. announced plans to launch Distrigo, its own multi-branded automotive spare parts distribution network. This will further accelerate the race to consolidate as players seek to protect their market shares.”

– Here in North American, shares of US auto part retailers fell last Monday following a report, “…  that Amazon.com Inc had set its sights on the $50 billion do-it-yourself aftermarket auto parts business.” Shares of Autozone Inc, a large player in the retail auto parts market, “… slumped as much as 5.1 percent to $730.99, posting their biggest intra-day percentage loss in nearly one year.

Advance Auto Parts’ shares fell 4.2 percent to $164.27, O’Reilly Automotive declined 4 percent to $263.13 and Genuine Parts Co lost 3.7 percent to $96….Amazon has struck supply contracts with some of the largest parts makers including Federal-Mogul Holdings Corp, Dorman Products Inc, Robert Bosch GmbH and Cardone Industries Inc.,” according to a report. A report in the New York press quotes an RBC Capital Markets analyst as saying that, “Amazon is both paying vendors more and offering customers lower prices than brick-and-mortar competitors on like-for-like products…If Amazon is committed … they are definitely going to pick up some share. In terms of the disruption they will cause, I don’t think it will happen as quickly.” The report also notes that, “For Amazon, the push into auto parts is seen as the next step to growing its auto business, Amazon Vehicles, an online platform for users to research on cars, auto parts and accessories, which it launched in 2016.”

– It was also announced that Ford  will create a new auto parts line for its competitors vehicles. The new brand will be called Omnicraft. The company will sell parts to Ford dealers and independent repair shops to fix competitors’ vehicles. A report on the initiative quotes Frederick Toney, President of Ford’s customer service division, as saying the global business for automotive parts is now estimated at more than $500 billion, and service will expand by 70 percent in the next six years or so. Toney “would be pleased” if in a decade 10 to 15 percent of its parts sales were from Omnicraft. According to the report, providing parts for, “… non-Ford vehicles will allow dealers to increase repair and service business, as well as offer an opportunity to convince owners to look over new Ford cars and trucks while they are at the dealership.”

Collision Repair magazine has reached out to Ford representatives to ask if they plan to include body parts under the Omnicraft label, but no response had been received at the time of publication.

– A report from Investing.com notes that as the ‘Big Three’ automakers report earnings over the coming weeks the US car makers, “… are relatively cheap right now. Ford closed [recently] at $12.61 a share and sells for seven times its yearly earnings; GM closed at $37.00, and has a P/E ratio of 4.3, while Fiat Chrysler, at $10.88 a share at yesterday’s close, sells for 8.5 times earnings.” A typical price-to-earnings ratio (P/E ratio) is about 15, so the big OEMs do seem cheap in comparison.

“In our opinion, GM is the better buy. Its renewed growth and future outlook appear to be the brightest, particularly ahead of the still-unheralded Chevy Bolt release scheduled for later this year. It’s a car that could potentially become a catalyst for GM share price growth, something that Ford sorely lacks,” according to the Investing.com analyst. “More importantly, the Chevy Bolt will roll out nationally during 2017, which means it will be available across the entire country by September, while the earliest Model 3 deliveries are expected no sooner than early 2018.”

The analyst noted a potential “wildcard” in the economy ahead. “Of course, the biggest wildcards for the American auto industry right now are the future and viability of US manufacturing and President Trump’s proposed policies on imports. Manufacturing in the US is expensive, which is why automakers years ago outsourced certain jobs to Mexico or China. All the outsourcing was initiated to benefit the corporate bottom line,” according to the analyst. Reversing investment trends to return manufacturing to America would see wages rise and profits at the OEMs fall.

– Major insurance company Travelers Co., posted, “… record fourth-quarter net income and operating profit despite disappointing results in its auto-insurance business as it grappled with costly bodily injury claims in wrecks that it tied to distracted driving.”

According to a report in the financial press, executives from Traveler told analysts in a morning conference call that the company is suffering as a result of the spike in distracted driving claims. “[The company] has experienced more severe accidents, many occurring at high speeds, often at highways and intersections. It is seeking approval for rate increases through state insurance departments to improve profitability … The New York company’s experience comes as executives from numerous insurers and trade groups recently have been commenting at industry conferences that cellphone-related distracted driving may be leading to more severe crashes,” according to the report.

As one of the first big P&C insurers to release year-end earnings, the results of Travelers are considered a sign of business trends at other big insurers.