THE GAME OF WORK

It’s all about fueling the fun

We still had our share of challenges getting the new shop up and running at Dodge City. People were getting used to working with each other, equipment still needed to be set up and required training. Production systems and administrative tasks were still being smoothed out. Remember Jim the controller? He was almost going berserk watching this new shop suck up boat loads of money with very little to show in return. For example, I asked Don Swick to get rid of our old paint system, which he did in a matter of an hour or so. He got $500 for over $5,000 worth of product! I almost had a heart attack, but I told myself that he did what I asked. Note to self, be more specific next time. Our front office receptionist was very loyal to the controller and anytime she saw anything where we had to spend money or lose money she ran straight to Jim. This episode really set him off.

Jim’s reaction was to tighten up our spending big time. We could hardly get pens and paper! When we asked for 3M sticky note pads, he sent one pad over and requested that we split it up amongst us. Don Pogoda immediately used his to write one word on each sticky note and stuck them across the counter in front of the receptionist. Here is what he wrote: “I – would – like – to – have – more – sticky – notes – please – and – thank – you, – Don – Pogoda.”

The receptionist immediately ran to Jim who promptly came over and scolded us for being adolescent and annoying.

This situation carried on throughout the summer and towards fall I could feel that the end was near as Jim was literally wearing the dealer principal down, urging him to get rid of the two Dons and me. Two things worked in our favor: the dealer principal liked us—we were a breath of fresh air for the dealership— and he could see the body shop transforming into a world class facility. Secondly, Jim was cleaning the eavestroughs at his home and fell off the roof badly injuring his right arm and ribs forcing him to have to stay away from work for the next four months!

During this time our receptionist quit, and we hired an amazing receptionist named Cathy who was super organized and extremely competent. By the time Jim got back to work the shop was very profitable and adding tremendous value to the dealership. We had practically become untouchable in the dealer principal’s eyes!

So how did we do this? The first thing we did was make the shop a fun place to work. Those of you that know Don and Don are aware of how zany and fun they can be. We tempered this with a strict regime of measurement, scorekeeping and feedback based on a book we had read called The Game of Work by Charles (Chuck) Coonradt. Ken Krogue from Forbes Magazine sums up the Game of Work better than I can: “Chuck wrote the book in 1984 but he founded The Game of Work in 1973 to answer the charge that U.S. productivity was not world class. He noticed that the same people who considered work drudgery were often the first ones to leave right at 5 p.m. They were the very same people who spent incredible amounts of money on hobbies or sports like skiing and golf. This caused him to ask the question:

“Why would people pay for the privilege of working harder at their chosen sport or recreational pursuit than they would work at a job where they were being paid?” Chuck answered his own question by developing five key principles:

The two Don’s and I immediately saw the value in what Mr. Coonradt was trying to say and we put it to use in our shop with spectacular results. Here are some of the things we did:

We had to drill holes in the floor of the new shop to install tie downs for body pulls. It was hard and noisy work; nobody wanted to do it and if they did, it was a halfhearted effort. We decided to play a game, whoever could drill a hole the fastest would receive a prize like preferred parking at the dealership for a month. I grabbed a stopwatch and Don did the first hole in 1 minute 57 seconds, another guy stepped up and did a hole in 1 minute 40 seconds, another guy jumped in and so on until we got to the point where guys were drilling a hole in less than a minute. It took no time at all to do the entire body production area and people were high fiving and cheering each other on!

In those days we were using metal mixing cups that were expensive and hard to clean unless you got at them right away. We came up with a game where we asked the staff to collect cans from home, clean them and bring them to work. Whoever brought in the most cans would win a neat prize. One of our painters, Gerry Forseille was from the small town of Duck Lake about 45 minutes north of Saskatoon, he got practically the whole community collecting cans and easily won the contest. We did not buy mixing cans for over a year.

We had a competition to see which body man would have the least amount of body filler waste. We literally had to use the digital scale in the paint room to declare Dennis Klemecki the winner with less than a tablespoon of wasted body filler. He won a nice prize. We played another game called: ‘The Price is Right!’ We brought in some new unused body and paint shop materials—a roll of masking tape, a can of body filler, some sanding strips and discs, a gallon of two-part primer—gave each employee a paper and pen and asked them to guess how much each item cost us. The one closest to the correct price won a nice prize, but the shop won as well. People were astounded at how much this material costs and going forward they were very careful in how they used it.

We also met every Tuesday to have lunch with the entire staff. We set goals, gave reports on how many hours the shop had generated, brought in guest speakers to motivate, and encourage high performance and basically asked the employees what we needed to do to help them succeed.

One of the coolest things we did was play: ‘Show and Tell’—I’m not kidding. We asked each employee to tell us something about themselves that none of us would know and that it would give us a better understanding of who you were and what you did besides work. One guy brought a trophy and shared stories about his younger days playing hockey and winning championships. Another guy brought a clock from his father’s garage and explained how he learned to tell time on that clock vehicle visiting his dad for coffee breaks. One young man brought a knitted sign that his grandmother had made for him. It may sound hokey, but we learned a lot about each other doing that little exercise and our staff was proud to share a piece of themselves with us.

The most interesting ‘Show and Tell’ was brought in by Don’s brother, Dennis Pogoda. He brought a jar that was wrapped in masking tape and proceeded to tell us a story.

“Do you ever come home at the end of a day and put your change on the dresser only to find it gone the next day? Simply put this jar there and nobody will touch it! Do you ever buy a gift for your wife and hide only to see that she finds it and the surprise is gone? No problem—just put it in a bag in your closet and put this jar in front of it, she will never look! I’m a fly fisherman and I like to tie my own flies; I use feathers and horsehair, but my wife comes by with the vacuum when I’m not around and sucks it all up! No problem, just put this jar on the table with the feathers and horsehair, she won’t come near it.” By now our entire crew is totally transfixed on the jar, what on earth can be in there that could do such a thing?

Dennis pulled the tape off to proudly display 10 years of toenail clippings, some greenish and black and the room exploded with laughter and gasps! Now you might think ‘what the heck does any of this have to do with running a body shop?’

Well, I can tell you that we did not have people gossiping about other people or complaining about who got what job, we had people laughing and enjoying each other’s company as we systematically cranked up the volume, the quality and the profitability of that shop.

We were having fun at this Game of Work! We were the Ted Lasso’s of the 90s! 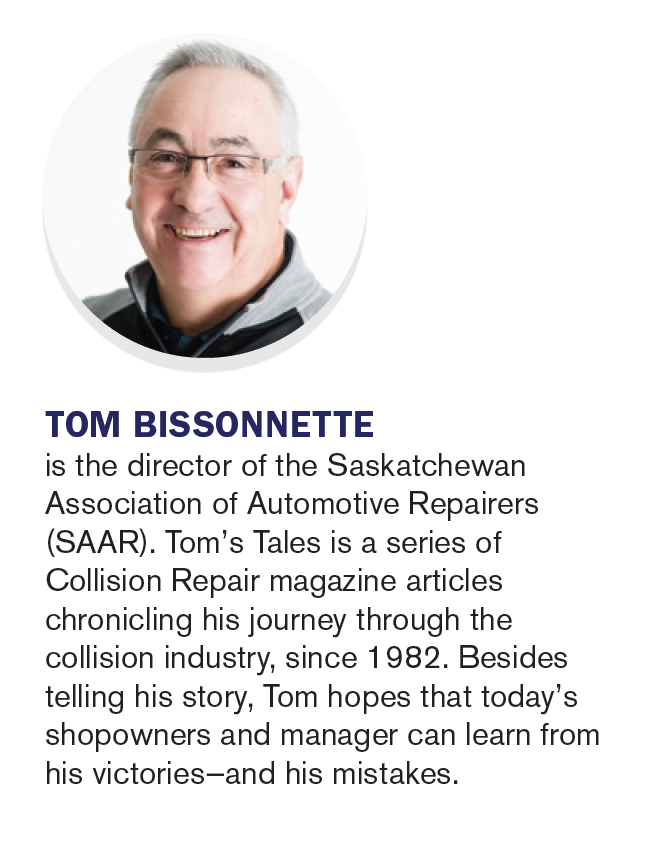