THE DENT DOCTOR IS IN

Dent Clinic has a new location open in northeast Calgary that incorporates a bold new move from the company that could see them closing in on the Alberta collision repair market.

Drivers in Alberta are no strangers to the intense hailstorms the province seems to be struck with on an annual basis and Dent Clinic is looking to close in on the demand for more robust collision repair services.

“This shop is kind of a pilot opportunity because typically the Dent Clinic has been all PDR (paintless dent repair). This is the first dent clinic that is also a bodyshop. It’ll certainly pay off if we have another large hailstorm like we did this year—that one was a catastrophe,” Jeff Blanchard, general manager of Dent Clinic’s new northeast Calgary location, referring to the June 13, 2020, hailstorm that pummeled Alberta. “It was a lot of hard, hard hail that was very severely damaging to vehicles. Normally we would send [vehicles] out to a bodyshop, but now we’ll be armed to do it ourselves.” 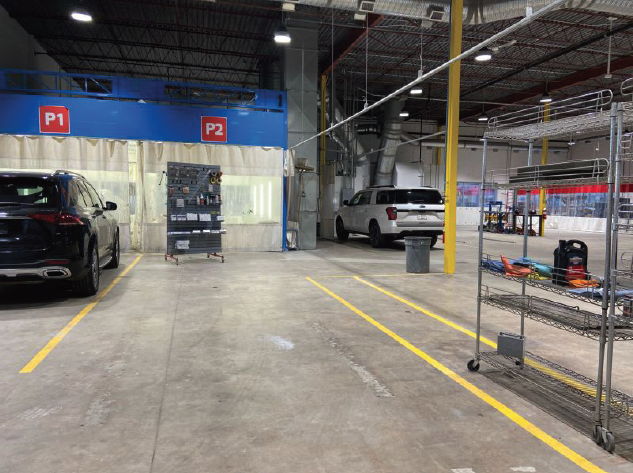 The 16,000 sq.-ft. facility is equipped with four drive-through appraisal bays, two portable light tunnels that can be used for remote estimates, two down-draft prep stations and perhaps most importantly, “now we offer WiFi for our customers upfront,” said Blanchard.

“The light tunnels are unique; not too many people have those. They came in handy this year for estimating hail at some dealerships here in town,” said Blanchard.

As well, this newly renovated and quite spacious facility allows Blanchard and his team to fit 20 cars within the shop and cycle through repairs at an impressive rate.

“It depends on whether it’s collision or hail. Collision takes longer—we’re working on a unit now that’s going to take two weeks; it needs a whole new door and the rocker panel is all pushed in. Generally, we can do a big hail job in about three days. In the summertime, we had six techs here, we were putting out probably 10 to 12 a week. If it’s all PDR, it’s much faster than if you have to put on a new roof or a new hood.”

Dent Clinic already has locations in Medicine Hat, Edmonton, Saskatoon, a smaller remote branch in Winnipeg, and with this latest expansion, the company now has its third Calgary location with additional plans to move into Lethbridge.

The decision to continue converting Dent Clinic locations into fully-fledged collision repair shops rests on the success of Calgary northeast, however.

“If this works out, they’re possibly looking at doing it in Edmonton and Lethbridge,” according to Blanchard.