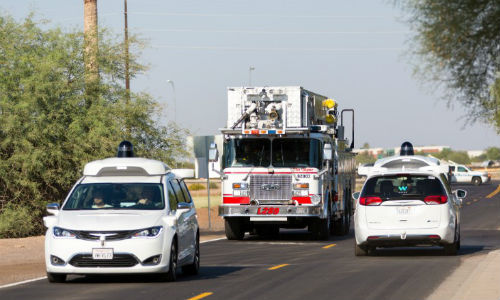 Toronto, Ontario — July 2, 2017 — In this week’s Autonomous Report, we look into the potential for LiDAR hacking, how autonomous vehicles (AVs) are learning to deal with emergency vehicles, the role of rental car companies in Google’s grand plan, and much, much more!

– A report from Deutsche Bank claims there will be no “widespread deployment of automated driving before 2040.” Over the last year the autonomous vehicle (AV) story has gained speed. The most ardent supporters of the AV revolution warn that radical change is just around the corner. The Deutsche Bank report throws some cold water on the hype, which has, arguably, become a bit heated of late.

The bank’s research unit produced the report, which concludes, “… several more decades will have to pass before the digital car has largely penetrated the passenger car market; before 2040 this will probably not be the case.” The report refers to Level Five AVs (completely autonomous vehicles), at a point when they have “high market penetration.”

– Whatever the time line, major car companies are reacting to what they see as a major disruption in the industry. BMW announced this week that it will “streamline” its manufacturing process. The company will offer fewer variants in terms of engines and equipment. Reducing the complexity of the product will allow the company to move money to research and development. According to a report by Reuters, BMW wants to develop, “… electric, autonomous and connected cars …” The report notes that, “China’s aggressive push to introduce electric car quotas has forced European carmakers to accelerate the development and roll-out of electric and hybrid vehicles, pushing up their costs.” As well, “Because electric and hybrid cars are less profitable than cars with petrol and diesel engines, BMW is looking for savings by reducing the complexity of its engine and equipment portfolio.” Nicolas Peter, Member of the Board of Management of BMW AG, is quoted as saying, “We have over 100 steering wheels on offer. Do we need that many variants?”

According to a quote from Washington, “This is the next step in Ford’s automation story. Ford is poised to drive into the future by expanding automation of mobility products and services.” The new division will carry out research and evaluate, “… new sensor technologies, machine learning methods, technical requirements for entry into global markets, and development of personal mobility devices, drones and other aerial robotics to enhance first- and last-mile travel … manufacturing and logistics, as well as building other robots to complete ergonomically difficult tasks,” Washington wrote in a post on Medium.

– It was widely reported last week in the auto, tech and business press that Waymo (Google’s car division), has, “… reached an agreement for Avis Budget Group to manage its fleet of autonomous vehicles.” The story describes the deal this way, “The rental car firm will service and store Waymo’s Chrysler Pacifica minivans in Phoenix, where the parent of Google is testing a ride-hailing service with volunteer members of the public. Waymo will own the vehicles and pay Avis for its service, an arrangement that is set for multiple years but not exclusive. The new deal is limited to Waymo’s vehicles in Phoenix.” According to a story on Curbed, “ … the Alphabet division that spun off from Google is putting the other pieces of the puzzle together to build the ultimate AV empire.” Avis shares surged on the news, jumping from $21 to a temporary high of $28 a share later in the week.

– A street in the UK is home to a test of the CargoPod, a small AV designed for door-to-door delivery. It was developed by Oxbotica, the autonomous vehicle spinoff of the University of Oxford. Online grocer Ocado provides the infrastructure. British law still requires a human driver behind the wheel so there is a person with the vehicle at all times. According to a report on MIT Technology Review, “On the back of the vehicle are eight pods, each with a crate that can hold three bags of groceries. The van is filled by human hands from a small distribution centre—in this case, a larger Ocado van, which stores 80 of those crates—and sets off following a route to its drop-offs, which is broadly planned in the cloud but ultimately executed by the vehicle. When it arrives at an address, the customer is alerted via smartphone and must press a button on the vehicle to open a pod door and grab the groceries.” So far, according to the story, “Orders are limited to three food packs containing nonperishable goods like dried fruits or chocolate cookies, the trial will last only 10 days, and the delivery is limited to the bounds of Berkeley Homes, a gated residential development in Woolwich with limited traffic,” the story claims.

– Also appearing this week: The Register reports on a science paper explaining how to spoof LiDAR, one of the more common systems for AVs to create a map of the landscape and objects around the car. The device shoots out a laser beam, which sends back reflections to the device. The computer collates the information into a map from what is called a “point cloud,” created by the reflections of the laser. The device compares the point clouds to stored patterns representing objects in the world.

So far, so good, but three researchers at the Korea Advanced Institute of Science and Technology have demonstrated two different possible attacks on LiDAR. The researchers found that, “To spoof an object, the attackers only need to make the sensors respond to points of light that look like the point cloud of an object at them and collating the reflections.” One of the scientists is quoted as saying, “By illuminating the LiDAR with a strong light of the same wavelength as the LiDAR uses, we can actually erase the existing objects in the sensed output of the LiDAR.” The researchers also created a LiDAR optical illusion by making an object appear closer to the device than it was. The potential for creating deadly mayhem is obvious.

– The New York Times published a story describing how two foundational investors hand-delivered a letter handed to then-Uber CEO, Travis Kalanick. It wasn’t revealed what the letter said outside of what’s been reported abut Kalanick’s enthusiastic party life. It has been reported that he drunkenly harassed an Uber driver (in a confrontation caught on camera). It’s also been reported that he has sometimes been hard to find in the mornings. When decisions had to be made he wasn’t in the office. Even worse, he could not even be contacted. Apparently an investigation paid for by the investors found something. The contents of the letter have not been released publicly, but later that day Kalanick said he was stepping down as CEO for a leave of absence. Has the Uber-Bro been let go permanently?

– A report carried by CNN illustrates how Waymo is working with emergency responders in Chandler, Arizona. Current generation AVs need to be trained, as learning-based programs (as opposed to rules-based programs) are the software at the heart of self-driving vehicles. It’s proven the most successful method so far for developing an AV that actually works. As the software gains more experience it gets better and safer. The program is able to reference more experiences. To learn how to handle emergency situations, Waymo took their cars to this relatively smaller town to train them with real emergency vehicles. According to the report, the cars practiced driving when an emergency vehicle with sirens comes up behind it or passes on the road.