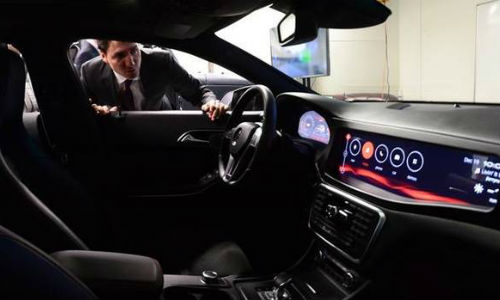 Toronto, Ontario — December 28, 2016 — The evolution of the automated vehicle (AV) sector over the last year has been extremely rapid. Just a year ago the idea that self-driving cars would drive massive new investments on the part of the world’s biggest companies seemed a bit nutty. But here we are. The new year is just around the corner and it seems AVs have become a major new business story. The emergence of the AV sector has to be the biggest story in the auto world in 2016.

As AVs become more common it seems accident rates could fall, but the amount of technology now being added to cars means a higher initial price point for the vehicle, and ensures that when accidents do happen they are far more expensive to fix.

Another big story from the past year has to be the rising cost of collision repairs. Computer scans are becoming a regular part of the repair. The number of driver-assist sensors that need to be replaced and calibrated is increasing. As one insurance executive noted earlier this year, the cost of repairing an average bumper on some standard autos has jumped from several hundred dollars to over a thousand dollars. As a result, collision repair centres are finding the business to be profitable as the industry evolves to a new level sophistication based on advanced technology.

A perfect example of the sudden rise of the AV is the big news in Canada recently that former smartphone giant BlackBerry is going to make a turn into the AV sector. Almost every paper in Canada carried the news that Blackberry is setting up an AV unit near Ottawa and will hire hundreds of engineers to work at the facility. Prime Minister Justin Trudeau was on hand to mark the announcement. The news came among a flurry of other major recent announcements.

– In the Globe and Mail’s coverage of the Blackberry announcement it was noted that the company will invest $100 million over several years in the Ottawa-area Autonomous Vehicle Innovation Centre. Blackberry has fallen on hard times and is looking for new sources of growth, according to the Globe report. The AV initiative will happen through a Blackberry subsidiary known as QNX.

“The company, which is racing to increase software sales as its handset unit and related legacy service access fees shrink, hopes to make itself indispensable in the automotive industry’s looming self-driving arms race,” according to the Globe.

The story went on to say that Blackberry is hoping its, “… security and safety credentials help it win a seat at the table as an array of automakers, chip and sensor providers and software developers work in competitive co-operation to bring self-driving cars to the mass market.” The announcement boosted the company’s stock price last week.

– CTV reports that Justin Trudeau said, “BlackBerry is helping to establish our country as the global leader in software and security for connected car and autonomous vehicle development … This centre will create great middle class jobs for Canadians, new opportunities for recent graduates, and further position Canada as a global hub for innovation.”

The story also notes that just last month BlackBerry signed on with Ford to help the OEM get a fleet of “driverless, ride-sharing vehicles,” to market by 2021.

– Another big announcement recently: According to The Windsor Star, the Windsor-built Chrysler Pacifica Hybrid is the vehicle of choice for Google as it launches, “… a test fleet of 100 self-driving minivans next year in the U.S.”

Waymo is the name of Google’s new self-driving division. According to the Star, “The joint FCA-Waymo project is part of a partnership forged earlier this year to incorporate Google’s self-driving technology into the Pacifica hybrid, which began production at the Windsor Assembly Plant on Dec. 2 … The vehicles are currently being outfitted with Waymo’s fully self-driving technology, including a purpose-built computer and a suite of sensors, telematics and other systems, and will join Waymo’s self-driving test fleet in early 2017.”

John Krafcik, Waymo CEO, said in a statement, “The Pacifica hybrid will be a great addition to our fully self-driving test fleet. FCA’s product development and manufacturing teams have been agile partners, enabling us to go from program kickoff to full vehicle assembly in just six months.”

The story also notes that the Windsor-Essex Economic Development Corporation organized, “…a brainstorming session December 12 with a group of University of Windsor researchers involved in self-driving projects, such as vehicle-to-vehicle communication. The ultimate goal is to establish an autonomous driving research and development centre at the university …” Kemal Tepe, acting head of the department of electrical and computer engineering, was quoted as saying, “This is our hope and we will continue to work on it. Windsor is in a better position than any other place in Canada because every auto company has an R&D centre within 50 kilometres. We can have cross-border partnerships.”

– In Michigan, General Motors announced it would immediately begin testing autonomous Chevrolet Bolts on the state’s roads. Not to be outdone. Ford also just announced its bid to get a fleet of self-driving cars on the road by 2021. According to a story on TechCrunch, Ford will, “… push forward in its efforts to get autonomous cars on the road, with a plan to begin testing self-driving vehicles in Europe next year. The testing is in advance of extending its plans to debut an autonomous car specifically for ride-sharing fleets in the U.S. in 2021 to Europe, sometime in the future following that initial launch.”

Basically, Ford wants to begin mass production of autonomous vehicles by 2021. The report notes that the bid to begin mass production of AVs by 2021 is an “… ambitious goal considering we’re only four and a half years away,”  but a Ford spokesperson says the company is determined to build driverless vehicles that completely eliminate the need for a human driver. “We believe autonomous vehicles and the automation of the driver will be a significant change, perhaps as significant as the moving assembly line,” said Raj Nair, Ford’s Chief Technology Officer.

– Volvo is working on a plan to integrate self-driving trucks into traditional industries, namely mining. Komatsu, a Japanese manufacturer of mining and construction equipment, is also looking for ways to automate their processes with their Innovative Autonomous Haulage Vehicle.

– Intel also indicated recently that it is getting into AVs. Sci-Tech Today reports that the “iconic semiconductor giant” announced two weeks ago the formation of an Automated Driving Group, which “will be solely dedicated to innovating the future of driving and designing the next generation of advanced driver-assist systems and autonomous driving solutions …”

According to the story, “The move follows what many considered to be Intel’s failure in smartphone and tablet chips. After struggling in that market, Intel reportedly canceled the upcoming launch of its new mobile chip last spring, ceding the mobile space to competitors such as Apple and Samsung … Intel has been building up to Tuesday’s launch for months. In July the company announced a partnership with BMW Group and crash-prevention tech company Mobileye, aiming to bring autonomous driving to the streets by 2021. And earlier this month at the Los Angeles AutoMobility conference, Intel CEO Brian Krzanich announced that Intel Capital, the company’s investment arm, will pour more than $250 million into the self-driving car industry over the next two years. Intel also has acquired companies in the market, including Yogitech, Arynga and Itseez.”

– California seems to have just lost out in the race to be worldwide headquarters for AV development. A flurry of stories appeared last week noting that, “After a week-long feud with California regulators, Uber’s self-driving car program is leaving the state…” The California Department of Motor Vehicles (DMV) famously revoked the registration of Uber’s 16 AVs last Wednesday, “forcing the company to shut down its self-driving pilot program in San Francisco.”

The DMV had determined that, “…. the registrations were improperly issued for these vehicles because they were not properly marked as test vehicles,” according to a letter the organization sent to Uber. According to the story Uber, “… did not obtain the proper license from the DMV that is required by all self-driving carmakers … Under the regulations, advanced autopilot systems, like Tesla’s, are not regulated whereas Google’s testing of its autonomous vehicle adheres to strict rules …” Uber was said to be worried about having to divulge test data and insisted its cars were not full AVs, as they had drivers in them. The DMV insisted the company get licensed under the more restrictive rules. Instead of applying for the permit in California, the company decided, “…to leave the state with its cars altogether, piling them on the back of its self-driving truck.” The cars will be tested in Arizona now.

– The Sweden-based engineering firm Semcon proposes tweaking LED technology on the front of cars to produce a “smile” when it is okay for pedestrians to pass in front of the car. The company’s new Smiling Car concept lights up with a smile to show that it has detected you and isn’t going to run you over.

PrevPreviousTuesday Ticker: Sherwin-Williams is ‘an unsung growth hero,’ Bitcoin comes of age and the price of oil may be heading up
NextTwo pre-apprenticeship programs to run in Ontario in 2017Next