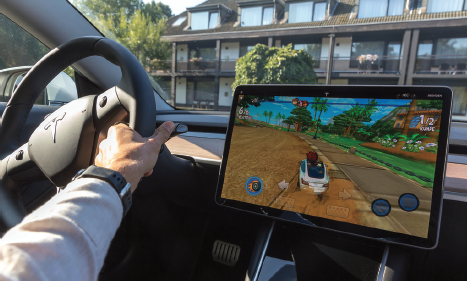 No more gaming on the go, says Tesla. The company will soon drop an over-the-air update to restrict the Passenger Play feature while the vehicle is in motion.

No more gaming on the go for Tesla drivers as the National Highway Traffic Safety Administration (NHTSA) reported the EV automaker has disabled the ability to play video games while vehicles are in motion. The NHTSA announced in late December it had opened a formal safety investigation to look into 580,000 Tesla vehicles sold since 2017 over the automaker’s decision to allow games to be played on the front center touchscreen. The evaluation covers various 2017 to 2022 Tesla Model 3, S, X, and Y vehicles equipped with the functionality “Passenger Play.” Tesla says that an over-theair update is on the way that will lock the Passenger Play feature when vehicles are in motion.

On December 16, a self-driving shuttle bus operating in Whitby, Ontario, collided with a tree, sending the operator to a nearby trauma centre with critical injuries. According to Durham Regional Police, the collision occurred around 4 p.m. along the Whitby Autonomous Vehicle Electric (WAVE) shuttle route, which circles a six-kilometre route near Whitby’s GO transit station. The shuttle operates at a speed of no more than 20 km/h and is equipped with a radar and 360-degree camera to scan for obstacles. At the time of the crash, the 23-year-old vehicle operator was the only passenger aboard. The cause of the crash is thus far unknown. 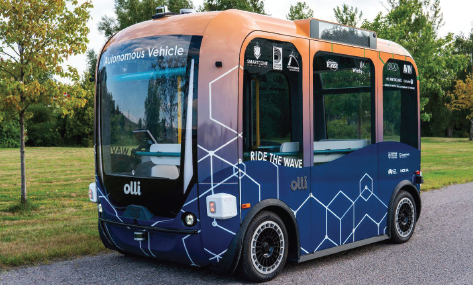 Whitby has halted its WAVE self-driving trials until a full investigation of the crash is completed. The City of Toronto has also ceased its trials with a similar shuttle bus. 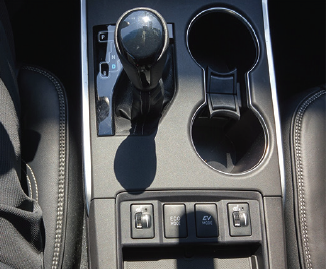 An excerpt from one customer complaint reads, “[Vehicle] goes into park and won’t shift into drive or reverse and dash says bring to dealer immediately. Car gets towed to BMW and tech tells me the liquid damaged a part under the gear shift…cost to fix $2,900.00 and not covered by warranty.”

“A US$5 million lawsuit is being brought against BMW following reports that the cupholders in X7 models are prone to causing electrical damage, and in some cases leading to a faulty airbag deployment. In what sounds like a truly Final Destination-esque turn of events, it has been found that the X7 M50i’s cupholders are “not properly designed to hold cups filled with liquid,” according to the suit filed before Orange County District Court in California. Despite entirely defeating the point of a cupholder, this flaw leads to an even deeper concern in that when a drink leaks in the cupholder “the wires for the SRS (airbag) control module, which sits directly underneath the cup holder, get wet and are damaged.” According to the suit, even “condensation on the cup” is enough to cause electrical issues. Taking things from bad to worse, this damage can reportedly in turn cause airbags to deploy irregularly. A specific complaint identified in the suit recalled an incident where a small amount of a drink was “spilled onto the gearshift center cons ,” causing the vehicle to stall out in the left lane of the highway.”

“Volkswagen is launching a new version of its Front Assist ADAS system designed to help drivers avoid bicycle and pedestrian collisions. The newest version of Front Assist employs the forward-facing camera to help identify and distinguish cyclists and pedestrians from other objects, not just directly in front of the car, but those traveling alongside it as well. Volkswagen claims the new version of Front Assist can even detect people and cyclists ahead of the vehicle in darkness or dusk that the driver might have overlooked. If the system senses a pedestrian or cyclist could be in the vehicle’s path, Front Assist can activate the Forward Collison Warning system and, in some c c Emergency Braking, said the automaker.”

BEYOND THE BRAKE BARRIER

“If there were a gifted program for OEMs then Ford and Honda would be its newest members as the pair of automakers have reached their AEB goal ahead of schedule. The IIHS announced in late December that Ford and Honda had both managed to equip more than 95 percent of their vehicles with automatic emergency braking (AEB) systems, ahead of the Sept. 1, 2022 deadline agreed upon by the
U.S. government and the 20 participating automakers. Not every automaker is hitting the mark in terms of AEB integration, however, as the IIHS’s report also called out General Motors, Jaguar Land Rover, Porsche and Stellantis for “lagging” behind their colleagues and equipping fewer than two-thirds of their vehicles with the lifesaving technology. Among the four, Jaguar Land Rover made the most progress, rising from zero percent to 60 percent year-to- year. Stellantis reported 43 percent, up from 14 percent; Porsche 59 percent, up from 55 percent; and GM 58 percent, up from 47 percent.”