Toronto, Ontario — The makers of Hot Wheels are sending out something special for all the 80s babies out there this holiday season, as Mattel has re-introduced the popular “Ultra Hots” lineup of diecast toy cars, this time featuring some miniaturized international rarities. This flashy line of mini sports cars ran from 1984 to 1986 […]

Toronto, Ontario — Since Dodge announced that it was closing the chapter on its current generation of Chargers and Challengers, customs shops and restorers have gone wild designing tribute models of the iconic muscle cars; including a customs shop out of Oklahoma that has created a welders worst nightmare. Finale Speed of Yukon, Okla. has […]

Toronto, Ontario – The Corvette Club of Ontario(CCO) is celebrating their Diamond anniversary this year. Founded in 1962, with only 6 members, the club’s 60th anniversary represents a fundamental love for the Corvette across Ontario. Gathering at the Canadian Warplane Heritage Museum last Saturday(August 6th), members celebrated the anniversary with over 65 Corvettes in attendance. […]

Edmonton, Alberta — A new initiative from the Alberta government is giving the public a glimpse into automotive history as the DRIVE: Reimagining the Ride exhibition prepares for launch next Wednesday. Having loaned 12 vehicles from the 1890s to the 1990s from the Reynolds-Alberta Museum and Remington Carriage Museum (RAM), the provincial government is aiming […]

St. Johns, Newfoundland and Labrador — Classic car owners assembled at a Wheels for Wishes fundraiser last week to help a legally blind 18-year-old raise $50,000 for a guide dog.  According to CBC News, Brandon Joy was deemed legally blind by the time he was in Grade 8 due to a rare condition called retinitis […]

Revved Up and Ready for Visitors: Canadian Automotive Museum will reopen this week

Oshawa, Ontario — The Canadian Automotive Museum is set to open up on July 16 after being closed down for months due to COVID-19 restrictions. The museum that’s located in Oshawa has one of the most rare and largest collections of automobile’s in the world, as some of the vehicles were only made in Canada […]

New Glasgow, Nova Scotia — A Nova Scotia company was founded on a passion for bringing the old back on the road in style.  Donald Clarke and Jamie MacGillivray were neighbours in New Glasgow, N.S., before deciding to turn their love of Toyota Land Cruisers into luxury car mechanical shop Bespoke Motor Company. This restomod-centred […] 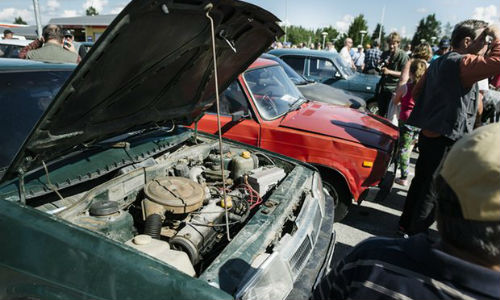 By Jeff Sanford Toronto, Ontario — July 22, 2016 — Some of the interesting overlooked news from the automotive world this week: Fiat Chrysler has its offices raided, a high-end Hyundai is outselling BMW and Ontario insurance rates are rising again. – Pokemon Go continues to be good for business in the collision repair industry. […]