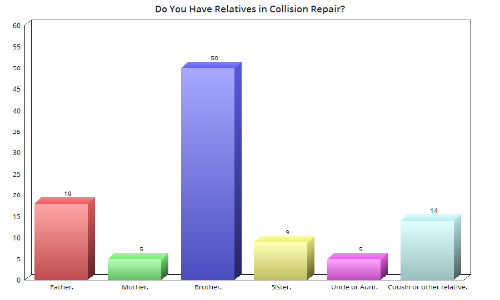 Hamilton, Ontario — July 25, 2017 — Collision repair is very often still a family business, according to the results of our latest reader survey. Businesses are frequently handed down from parent to child and other family members often find careers in the family’s shop.

Collision Repair magazine runs new surveys every week. Our next survey puts the focus on common hiring methods. You can participate in the hiring methods survey at this link.

The majority of respondents (74 percent) to our most recent survey indicated that they consider their shop to be a family business. While consolidation is definitely a force to be reckoned with in today’s industry, it’s worth noting that independents are still very much alive and well. However, just because a shop is considered a family business by its owners does not mean it’s not part of a banner, network or franchise. Many existing businesses have joined networks, with the owners remaining in control, and fully expect to pass the business down to their son, daughter or other relative in the fullness of time.

We also asked survey respondents to let us know if any of their relatives were also employed in the collision repair industry. Please note that this question was asked of everyone who participated in the survey, not just those who had already indicated that they worked in a family business. A solid majority of respondents (66 percent) indicated they had at least one relative working in collision industry in some capacity.

From there, the questions drilled down to discover specifically which relatives were involved. Please note that respondents were asked to check every response that applied, so percentages in this case will not add up to 100.

We would have guessed that “Father” would be the most common response, but this turned out not to be the case. While fathers are quite common at 18 percent, it’s brothers that take the lead, with half of the respondents indicating that their brother also worked in the industry.

Collision Repair magazine’s next survey focuses on hiring practices, including international hiring. You can participate in that survey at this link, and make sure to watch collisionrepairmag.com next Wednesday for the results!