CSN Brennan is the latest CSN Collision Centre to join the network under the ownership of Lift Auto Group.

Located in Stettler, Alberta a town with a population just over 11,000 people, CSN Brennan is well established as being on of the best repairers in the area, CSN in its online press release.

“The CSN Brennan facility is the best repairer in the region and that’s what attracted us to them,” said Lift Auto Group President & CEO, Mark Reineking. “The staff are exceptional at what they do, which allowed for a seamless transition into the Lift family, and we are committed to preserving the culture of excellence created by the former owners, Murray and Christy Brennan.” Reineking said.

With more than 40 years of operating history in Stettler, fondly known as the Heart of Alberta, the staff at CSN Brennan are well known to every customer they see. The friendly and familial approach to business in addition to their high-quality of repair work makes them the preferred repair facility for anyone in need of collision and auto body repair in the region. 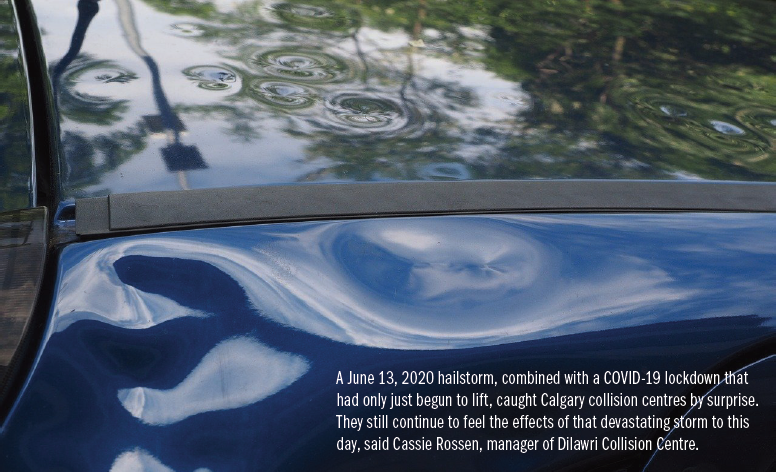 “It was the worst storm I’ve ever seen in my career,” said Cassie Rossen, manager of Dilawri Collision Centre, recounting that June day that managed to make the spring of 2020 even worse for the city of Calgary.

The Insurance Bureau of Canada (IBC) released a report outlining the most costly severe weather events of the past year with the June 13 Calgary hailstorm totalling more than $1.3 billion in damages and easily dwarfing the other events by comparison. The storm caught the city off-guard, as many Calgarians are accustomed to hail season occurring over the summer in July and August.

“People were running out of their rental maxes way before their vehicles could get worked on due to backordered parts. Windshields were smashed out; panoramic roofs were smashed out. We had vehicles where every lamp on the outside was smashed out,” said Rossen.

This unexpected storm early in the season, combined with a COVID-19 lockdown that had only just begun to lift, caught Calgary collision centres by surprise and they still continue to feel the effects of that devastating storm to this day.

“Things were swamped here and COVID caused me to only have half the staff here to take care of things. I’ve been backlogged for the last eight months, still doing hail repairs,” said Sasha Butts, production manager at Country Hills Collision.

It’s a common lament among Calgary repairers at this point. The storm is more than half a year past and yet the repairs don’t seem to stop. “It began with a slow process, I guess because it was very difficult for the insurance companies to get a handle on how fast everything was coming across their desk. But, once they were able to have that direction of where they were sending the work and how fast they were able to get it out, I think all of the shops started to see quite an influx of work, probably lasting to the end of November,” said Al Giga, manager of All Makes Collision Centre.

The bureaucratic side of working with insurance companies, and the delays that result, are nothing new to collision centres, however, what no one had a clear answer to was how to address the concerns of customers of how their vehicles would be serviced safely, in regard to COVID regulations.

“[COVID] definitely made it a little more challenging due to the fact that people were a little more apprehensive to leave their cars here or bring their cars in because of the possibility of things getting shut down again. Luckily enough, we’re considered an essential service so that never happened and we were able to put our clients’ minds at ease,” said Rossen.