Edmonton Transit Service (ETS) has announced the arrival of 21 Proterra electric buses, with another 19 buses on the way by the end of 2020. The 40 vehicles will mark one of the largest single purchases of electric buses in Canada’s history. The ETS currently has more than 1,000 diesel buses. Adding the 40 electric buses will be a serious step towards meeting the city’s goal of reducing its greenhouse gas emissions by 50 percent for 2030.The buses will also make ETS one of the first North American transit systems to implement in-depot overhead charging for its electric buses, a technology that was developed by Proterra in collaboration with ABB and ETS.

To charge the vehicles drivers will drive into one of 26 parking spots equipped with the chargers and flip a switch initiating an overhead charging process reliant on RFID and Wi-Fi technology.The buses purchased by ETS have 660kWh of battery storage onboard each—the most energy storage on any 40-foot electric bus—which allows for upwards of 350 kilometres of range. The buses will deliver nearly twice the horsepower and five times better fuel efficiency than a standard diesel bus engine.ETS expects to begin putting the vehicles in service in early August 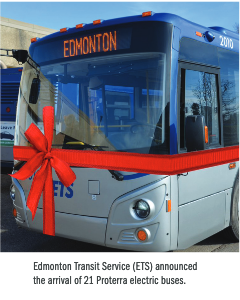 A Calgary car buyer is shocked after finding out the truck he purchased from a reputable dealer was stolen.In December, Skyler Anderson bought a 2014 Dodge Ram 1500 from Sunridge Automotive for $33,000, reported CTV News. He said he received a call from a registry in Edmonton informing him the truck was stolen, so he went to Calgary police, who tried to look at the vehicle identification numbers, only to find that they had been scratched off. “This is an extremely rare case and I have never seen this before in my 15 years in the business,”Jordon Romeril, General Manager of Sunridge Automotive told CTV News.

“We are refunding the customer 100 per cent and feel terrible that one of our customers has had to go through this event,” said Romeril. “The customer has been refunded his down payment and we are in the process of cancelling the loan with TD.”Romeril said the dealership had screened the truck purchased by Anderson but it had been re-vin’d with a VIN that was not stolen.The dealership is working with the Calgary Police Service to investigate this incident and is also looking into ways to prevent something like this from happening again.

An Alberta man who was born blind is living out his dream of driving a Corvette after an experimental procedure allowed him to see for the first time in his life.Mike Schickerowski was born with nystagmus, a disease that’d rendered him legally blind for his entire life, and thus unable to drive any vehicle, reported Global News.“It basically involves involuntary movement of your eyes,” Schickerowski explained to the news outlet.“If you’ve ever taken a photo with your camera and moved it slightly or the object moved and it’s a blur, it’s the exact same symptoms.

My brain would never interpret the image as a steady picture — it was always a b l u r .”Edmonton Transit Service (ETS) announced the arrival of 21 Proterra electric buses.That was what Schickerowski experienced for 44 years, up until October 2018, when he signed up for an experimental trial in California for a chance to correct his vision. Amazingly, it worked, and the first thing Schickerowski did after seeing for the first time was buy a bright yellow Chevrolet Corvette.“Some people said, ‘Oh, it’s Alberta, you need a truck,’ and, sure, I like trucks – they’re nice – but everybody’s got a truck,” Schickerowski said.Schickerowski didn’t even have his driver’s licence when he purchased his dream car, but later passed it with ease.