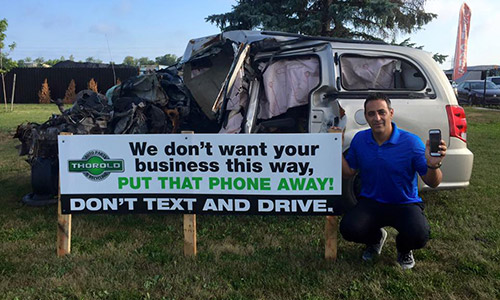 Thorold, Ontario — September 9, 2016 — A southern Ontario auto parts store and recycler is leading the fight against distracted driving, launching a new initiative in an attempt to deter people from using their phones while they’re at the wheel.

Frank Serravalle and his team at Thorold Auto Parts and Recycling decided enough was enough after yet another vehicle found its way to their facility having been wrecked as a result of distracted driving, choosing to display the smashed-up vehicle on their property as a lesson to those that think it’s ok to take their eyes and focus away from the road.

Featured alongside a sign that says “We don’t want your business this way, put that phone away!” Serravalle hopes the disturbing image of the warped car is enough to make people realize they’re playing with their lives every time they pick up a cell phone while driving. Speaking to Collision Repair magazine on Sept. 8, he detailed just how big a problem he believes distracted driving has become.

“The most concerning to me is that you see people on their phones while they’re driving every single day. It’s gotten to the point where it almost seems to be accepted, which in itself is completely unacceptable,” Serravalle said. “Just recently I was driving on the highway coming home from Toronto and I witnessed someone flying right by me with their head down, texting away on their phone. It’s crazy.”

He added, “It’s become a real, real issue and I think more attention needs to be brought to it.”

Over the past few years several provincial lawmakers have introduced legislation banning the use of hand-held cell phones while driving, with Nunavut the only province or territory in Canada without regulations. Despite those new laws, CAA reports that driver distraction is a factor in roughly 4 million motor vehicle crashes in North America each year.

And those numbers are only going up according to Serravalle, who says he’s seen a significant rise in the number collisions in the Niagara region in recent years.

“The problem here is that as technology becomes prevalent in our everyday lives, people are almost afraid to detach themselves from it for even a few minutes. That’s why we’re seeing people driving along with a phone in their hand and that’s why we’re seeing more and more collisions as the months and years go by,” Serravalle said.

He added, “It’s not just coming from me. From speaking with insurance brokers throughout the region, they’re all saying the same thing – that we’re seeing more and more of this sort of thing every single day. I have a significant number of cars coming in now almost on a weekly basis as a result of an accident from distracted driving.”

Almost a month on from the launch of the initiative and Serravalle says he’s delighted with the response its garnered thus far. Within days of posting the image on social media it had been viewed by more than 100,000 people, many of whom had shared or passed the message on themselves.

“Obviously we’re delighted that this is touching so many people, I’ve had a lot of people telling me they’ve yelled at someone for picking up their phone in a car or even stopped doing it themselves, so it’s resonating,” Serravalle said. “I personally see this as a bigger, more serious issue than drinking and driving. Most people seem to have their phone in their hand these days and it’s not acceptable. It’s almost as if people reach for their phones without even thinking… We need to change that mindset.”

With that in mind, Serravalle said he and his entire team at Thorold Auto Parts and Recycling were committing with pushing this initiative forward, revealing further plans he has to get his message across.

“We’re going to be promoting this regularly on social media, we’ll be reminding people at all of our social events and just make this a part of our everyday work schedule. I strongly believe with the business and industry we’re in that we have a responsibility to try and steer people right and remind them that it’s never a good idea to text while you’re driving,” Serravalle said. “If we can save just one life as a result, then it’s worth all the effort in the world.”