The road to greatness is never without trial

I don’t want it to sound like everything was perfect at Dodge City. We still had our challenges dealing with employees, customers and insurance companies just like everybody else. Sometimes we were our own worst enemy.

This was in the days of shops doing handwritten estimates and we routinely would go outside to look at a customer’s vehicle, give them a verbal quote, then come back inside to try and make the repair estimate fit the quoted number. Thinking back, I realize what a gong show this was! For instance, I had a customer ask for a quote, which I gave him a verbal ballpark, then he reached in his pocket and pulled out the insurance company’s estimate for twice what I quoted him, then he asked if I would absorb his deductible!

Like many collision centres, we were just plain stupid and lazy when it came to giving a customer a proper damage assessment. It really wasn’t until we got computerized estimating that we started to get on the right track doing proper damage assessments, but even then, we had to pinch ourselves that the damage was more than twice what we thought it would be at first glance.

It was apparent to me that as an industry we undervalued ourselves. We had been conditioned to accept low door rates and lousy assessments based on our own poor understanding of what was really needed to repair vehicles properly.

I remember when Chrysler first incorporated airbags into their vehicles and we had a 5th Avenue come in with the driver airbag deployed. I called our service department to get some information on what components needed to be replaced in a situation like this, they had absolutely no information or did not care to look it up.

Fortunately, I contacted I-CAR who had published a list of what components required replacing—but I know that we did not send the vehicle for a post repair scan to reprogram everything!

Over the next few years, I had various customers come in with a significant crash where the airbags did not deploy, when they asked why that was so, I gave them a blank stare suggesting that perhaps the damage missed the airbag sensor. We had another customer come in with the front licence holder that was cracked when he slid into the vehicle ahead of him yet both airbags deployed! Again, I did not have an answer for him why this happened because, quite simply, I did not know!

When I inquired with Chrysler to see if they had any training for collision centres, I received a brochure about training for wind whistles and water leaks. We simply did not know what we did not know—and it was scary.

We started to get serious about training and, quite frankly the only show in town was I-CAR. Our own local bodyshop technical school was even further behind the curve than we were, they were still using acetylene welding and lacquer primer!

At the time, I-CAR Canada was headed by Keith McCrone; we got to know him well. An SGI supervisor by the name of Sid Petrisor was our local go-to guy. We embarked on a healthy regime of I-CAR training and in fact, Don Pogoda became a refinish instructor then went on to receive national acclaim for his teaching and presentation skills.

We were one of the first I-CAR Gold Class shops in Saskatchewan—I think Lloyd Giles in Elrose might have been the first one—but in any case, we got our guys totally involved and we all became body repair learning geeks!

To assist with his I-CAR Training Don Pogoda had taken a Dale Carnegie course and actually went on to become an assistant instructor for several years. He wanted to keep up the public speaking, so he did not lose what he had learned. With that in mind we developed a presentation called Fun at Work which was based on Chuck Coonradt’s book, The Game of Work. 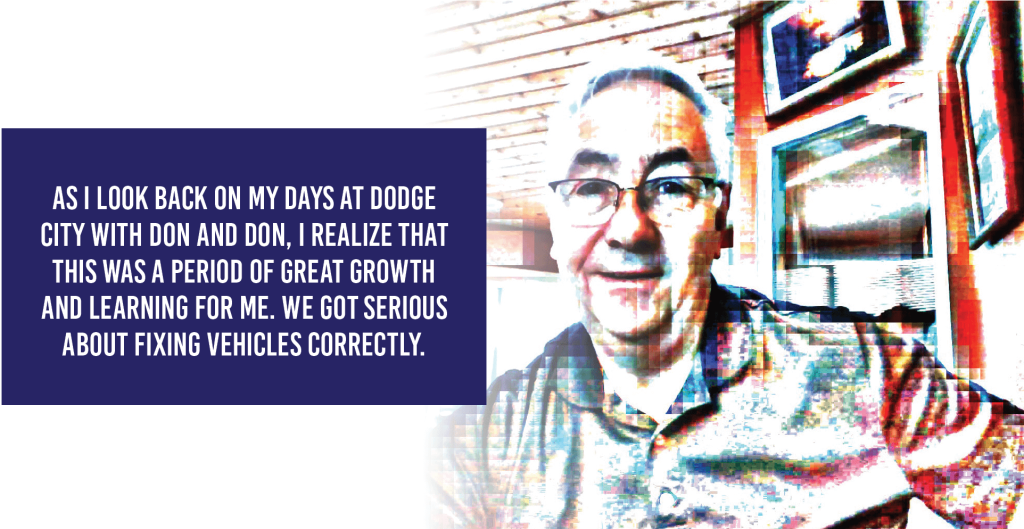 To get speaking gigs, I went to the public library and retrieved a list of organizations that were always looking for speakers. I sent out about a hundred letters offering our services to speak. One of the first organizations that responded was the Chamber of Commerce; they invited us to the prestigious Saskatoon Club to speak at one of their breakfast meetings.

The presentation chronicled what we were doing at Dodge City, but we incorporated several skits and games that were funny, thought provoking and engaged the audience to participate. It was a smash hit—the people loved it!

Next thing you know we were in big demand to speak to health care professionals, police departments, the fire department, Revenue Canada, Crown Corporations, services clubs, schools—you name it, we probably spoke at it. We had a blast and the body shop business continued to soar; everybody wanted to do business with us.

One of the coolest things we did speaking wise was at our own dealership Christmas party. Don and Don dressed up as our two main dealer principal partners and put on a skit that was hilarious! They looked like the owners, talked like the owners and basically roasted them on every silly little thing they did over the past year.

Normally you’d think the dealer principles would lose their minds, but they absolutely loved the gag, it became a tradition for years after the first one. The interesting thing was that the only people at the dealership that got to drive demos were the department heads and a few key salesmen but after the boys put on this show, they were both given demos to drive going forward—we were the only department in the dealership where the assistant managers had that perk!

During this time my wife and I got involved with the Amway business. Now, I know a lot of people’s first reaction is to run away but I want you to know that it was a terrific learning experience for my wife and I. We were in business for ourselves but not by ourselves, we learned how to run a business, deal with customers, deal with upline and downline partners, set goals and learn how to succeed in life.

Amway is a business like any other, but they do have a robust personal development program that I wish everybody could participate in. I learned to read personal development books like: The Magic of Thinking Big by David Swartz; Think and Grow Rich by Napoleon Hill; How to Win Friends and Influence People by Dale Carnegie; The Go Getter by Peter Kyne; and What You Say When You Talk to Yourself by Shad Helmstetter. We had a saying: leaders are readers. To this day I continue to read self-development books and listen to podcasts. I learned from Amway that your business only grows as much as you grow and the same goes for your collision business.

As I look back on my days at Dodge City with Don and Don, I realize that this was a period of great growth and learning for me. We got serious about fixing vehicles correctly. Developing a balance in my work and personal life was a key to any future success that I would have.

Making my work fun and enjoying my family time were two important lessons I learned at this point in my career and I will be forever thankful to the people around me that taught me this. 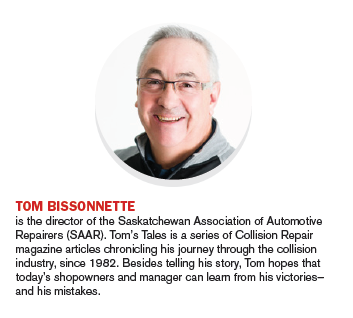 PrevPreviousIN PURSUIT OF THE IMPOSSIBLE
NextTHE OXYMORON OF ARTIFICIAL INTELLIGENCENext