No utopia: Autonomous vehicles will have drawbacks and negative impacts 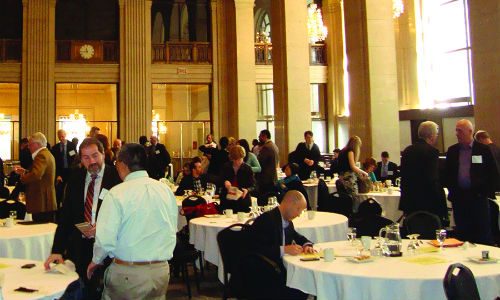 Toronto, Ontario — April 24, 2016 — The hype around automatic vehicles (AVs) is rapidly building up. Participants of the first Canadian conference dedicated to AVs outlined a coming economic utopia based on the rise of a new digital mobility economy. “There has never been a product quite like this,” said one of the presenters about AVs. According to the optimists the arrival of driverless cars will unlock whole new economic possibilities. What’s not to love?

Providing some balance to the unrestrained exuberance was Sean Rathwell, a Transit & Urban Mobility Specialist with Dillon Consulting. A presenter at the Conference Board of Canada’s conference held in Toronto, Rathwell has transferred his experience in the transit industry to his role as a consultant. He recently had a hand carrying out a survey that polled clients on their attitudes toward AVs.

Many of those polled worked in the transit sector. This cohort worried that having many more small vehicles running an already crowded urban roads—a scenario some imagine could come to pass in the era of AVs—will not necessarily a good thing. “The transit practitioners we surveyed don’t see that as a good city that people would want to live in,” said Rathwell.

Other pro-AV types have suggested that people may live further from work and commute longer distances if they could do something else during the ride while the computer drove. Rathwell questioned this assumption as well. “Will people be willing to drive longer distances? Is that desirable? Do we want that?,” asked during one of the debates.

Rathwell’s questioning of the assumptions of the AV supporters was a welcome bit of constructive criticism, especially when considered as part of the larger point he was making: urban dwellers will want to make sure AV technology is working for the culture, not against it.

There are, of course, some potential drawbacks to AVs. The biggest issue critics hit upon during the conference was the potential for widespread unemployment as a result of AVs.

One of the sponsors of the conference was the Van Horne Institute, a think tank dedicated to transportation issues. The organization released a study some time ago that was mentioned by several of the conference participants.

According to the author of the report, Brian Flemming, a Senior Fellow at the Van Horne Institute and an Order of Canada holder, the government will have to take an active role in managing some of the issues around AVs.

Addressing the conference Flemming touched on the employment issue. “I think the job losses will far exceed the jobs that are created,” he said. For anyone driving a truck today “the writing is on the wall,” he said. Automated combines have been operating for years. It is only a matter of time before drivers of trucks go as well. The resulting unemployment will be a major issue.

Today transport car and truck service drivers represent 1.5 percent of the workforce, or over 500,000 people. No fault insurance programs will also break up over time, according to soome of the conference participants. The dealer market will be at risk (remember, a new Level Five AV would be able to drive itself to your house after your ordered one online). The coming decline in accidents will reduce auto body and auto repair work, as well as affect the auto insurance industry. The sales and financing supply chain for cars will be affected. So will the oil industry and the fuel distribution network. It is expected many AVs will also be electric. As a result, up to 1.2 million who work in the liquid hydrocarbon fuel sector or occupations that will be significantly impacted by vehicle automation will experience effects. One panelist suggested almost every government department will be affected.

Of course, there will be some advantages to the era of AVs. Some suggest the current labour shortage in the trucking industry could be overcome.

“We might reduce standards for those who can get licensed to drive a truck if the majority of the driving is done by computer. That might be a way to solve the labour challenge,” said one panel member. There will be new business opportunities for the auto and technology industries that are designing and manufacturing the software for AVs. The size of these opportunities will partly depend on the extent to which the federal and provincial governments will stimulate activity in the AV space. Someone will have to build the stations needed to charge EVs. Many new jobs will added will be in IT, green energy, architecture, engineering and construction, as well as valued-added mobile services and their supply chains. “Someone will have to maintain and clean these autonomous shared vehicles on a daily basis as well,” said another panel member.

In his address Flemming talked about how it is that 3D printing, quantum computing, artificial intelligence, automated vehicles and other technical advances are combining to create what he called the Second Machine Age. “This is an era as transformative as the first machine age was,” said Flemming. That is, what’s coming will change the world just as much as the arrival of the original industrial revolution did some 250 years ago. “It really is an amazing time in history,” said one conference attendee.

For more coverage of Automated Vehicles: Planning the Next Disruptive Technology, please see “Autonomous vehicle conference: ‘no such thing as a crashproof car’” and “Autonomous conference: driverless cars will be ‘radically disruptive.’“