Try something new and learn a thing or two

Things were rolling along rather good at Dodge City, but I was getting restless. Zig Ziglar tells the story of Priming the Pump—you can watch it on YouTube if you search “Zig Ziglar priming the pump.” It is well worth the two-and-a-half-minute watch.

In this clip, Zig hammers on the pump relentlessly before realizing he needs to prime it to reap the rewards. “You’ve got to put something in here,” he says, pointing to the pump handle, “to get something out of here,” as he points to the spout. “Anything worth doing is worth doing poorly until you can learn to do it well,” he says.

When I saw Zig give this presentation I could immediately relate. This analogy pretty much summarizes my career to date; I must learn things the hard way, by doing, making mistakes, learning and doing some more. Once I figure things out and get to the point where the water is flowing steadily, I must admit that I do not have the same enthusiasm for the job. I have realized that I am a builder, not a maintainer.

When I was approached by the local Peterbilt dealership in 1996 to design and build a new state-of-the-art collision shop for highway trucks I was immediately drawn to the opportunity. Dodge City would be left well cared for with the two Dons—Pagoda and Swick, if you’re new here—and I was intrigued to explore the world of heavy truck repair.

The owner of the Peterbilt dealership was a neat guy. A friend of mine that knew him during his school years suggested that he thought he was one of the least likely to succeed individuals that he ever met. He was totally blown away by the fact that the guy owned three Peterbilt locations and was hugely successful—a testament to the fact that hard work, integrity and people skills far outweigh book smarts.

I came on board late in 1996 and was immediately tasked with researching and designing the body shop. Shortly after I started, they had a used sales manager quit so the owner asked me to manage that until they found somebody new. Talk about a steep learning curve! Essentially, I just leaned heavily on several of the local salespeople, one of whom I recommended to take on the manager’s job and he has had a great career.

What should a heavy truck shop look like? Honestly, I had no idea, so I spent quite a bit of time researching and visiting other truck shops. For the most part I learned what not to do—most truck shops started small and then added on several times until they were a maze of different rooms. I had the luxury of working with Ton Reineking once again and even though he had never designed a truck shop his insights and ideas were incredible! We hired a CAD technician for around $25 an hour and we spent more than 100 hours designing the truck body shop. We even took a portion of the building and set it up for automotive repair as that was my comfort zone. 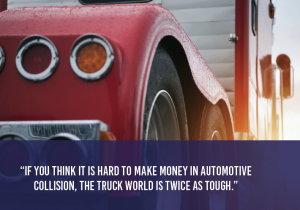 We had a downdraft paint booth that was 70 feet long with a roll up door in the middle— you could put a truck on each side or utilize the entire booth for trailers or industrial coatings. We painted everything from airplanes to modular HVAC systems in this booth. In addition, we had a local ambulance manufacturing company that had us spray their boxes, both new and refurbished.

The bodywork area had two massive prep stations to remove fumes from fiberglass work and allow priming to be done in the body area. The shop had two wash bays because you could spend two or more hours just washing a truck off getting it ready for production. If you ever visit Saskatoon, you really should check the place out, even 25 years later it is still very impressive.

Now if you think it is hard to make money in automotive collision, the truck world is twice as tough. The first challenge is the typical highway tractor takes up at least two car spaces. As I mentioned above you need about 35 feet of space to accommodate a truck with the hood up and easily twice the width of a car.

Now imagine going to paint the front hood of a Peterbilt 379, which is made from aluminum and has more than 100 rivets on it. You must paint this truck with Imron 5000 which is a single stage metallic, without creating any paint runs and making sure there are no tiger stripes in the metallics—all for eight hours! Compare this to painting the front end of a Honda Civic and blending into the front doors then clearing it for about 14 hours, which would you rather do?

The other Big Challenge in the truck world are the fleet and owner-operator drivers. The fleet operators want the truck to look good at 60-miles-an-hour as cheap as possible.

The owner operators live in their truck; it’s their baby. It had better be perfect, but they also want it cheap. It is like working with two totally different mindsets: on one hand you must be a one-stop shop with a quick turnaround, and on the other hand you must be the most incredibly high-tech meticulous collision centre you can imagine.

Remember how I mentioned my belief that the industry was its own worst enemy? It was no different in the truck world. Neither the truck shops nor the insurance appraisers had a sniff of what was involved in returning a truck back to pre-accident condition for a reasonable price where you could make a profit.

Some examples I witnessed include: We were lagging in the refinish department, so I called up the folks at Mitchell Estimating, who sent a fellow named Dick Widmer from San Diego. He conducted some studies and pointed out we should get time to mask, and that we should be charging feather, prime and block time to bring repaired panels to “like new” condition. Passenger vehicles require these extra procedures as well. It took time but finally SGI started paying for these operations. SGI used the same formula for bodyshop materials as it had on passenger vehicles; the challenge came when we had a truck with riveted panels, we would use about $1,300 worth of rivets and only receive about $900 worth of body material! We literally had to manually job cost each job to prove that we were losing money on every job. SGI’s response was to pay our “cost” on shop materials—they did not feel it was something that we should make money on!

I mentioned earlier that it took over two hours just to wash a truck down before repairs, and SGI simply considered this a cost of doing business. They still do today, even in the thick of winter or spring when vehicles come in filthy.

We only had one truck frame repair company in town and SGI refused to pay the towing there and back on a truck that was utterly undrivable. Even moving a dead truck from the shop to the back lot while waiting for parts was not paid for.

The best thing about working at Frontier Peterbilt is that I hired a young lady by the name of Chelsea Hoffman—you know her now by her married name as Chelsea Stebner! Right from the get-go this young 20-year old was a force to be reckoned with, she took control of the front office and was an indispensable part of my career from then on. Funny, some people just have what it takes to succeed, sometimes they just need an opportunity to shine—more on Chelsea later.

When I left Dodge City, Don Pogoda had taken over from me. He did not enjoy the pressure of running a busy shop and Don Swick had moved on and went onto a stellar career with PPG. In mid-1999 the dealer principal had heard that I was not totally happy with the truck business so he called and asked if I would consider coming back.

As much as I liked the owner at Peterbilt, the people I worked with and many of my truck driving customers, after about three years of banging my head against the wall I was glad to have an opportunity to go back to the automotive side of the industry.

I like to think that I left the truck side better off than when I first got there but I am aware that they still struggle with insurance to this day. Overall, it was a great experience, and I learned a lot about overcoming challenges, but I was glad that it was over.

On my first day back at Dodge City they had a big BBQ to welcome me. I immediately felt like I had returned home. It was great to be back with most of the guys that helped us build that business. The only major challenge on the horizon was Y2K—the imminent shutdown of all the world’s computers when the clock struck midnight on December 31st. We all know now that the event never materialized but we all learned not to worry about potential catastrophes—or did we?

In any case, we continued to roll along and pump up the body shop business. Fall turned to Winter then to Spring of 2000. Life was great, I had a good handle on the business, and I ran it as if it were my own. The owners gave me full control to run the business as I saw fit, and I pretty much had it on autopilot.

I was looking forward to pushing Dodge ahead to even greater heights, not just the bodyshop but even the parts department. I was good friends with the parts manager and together we would make sales calls on body shops asking for their parts business. Dodge City allowed me considerable latitude to work with SGI on behalf of the industry, so I knew a lot of shops on a personal basis.

Our pitch mentioned that fact and that the other Chrysler dealership was actively advertising for auto body business—which we never did other than word of mouth. One of the shops we paid a visit to was Parr Auto Body. We met with the general manager and their parts person at lunch. They agreed that we had some compelling reasons to support Dodge City and they would consider it.

On the way out of the restaurant I asked the general managers if the owners would ever sell the business as I heard it was not doing too well. He asked if I was interested and I said, “for the right price, maybe.”

Within a week, I received a call from the owners of Parr Auto Body asking if I was interested in buying their business! 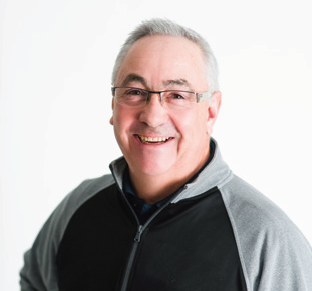