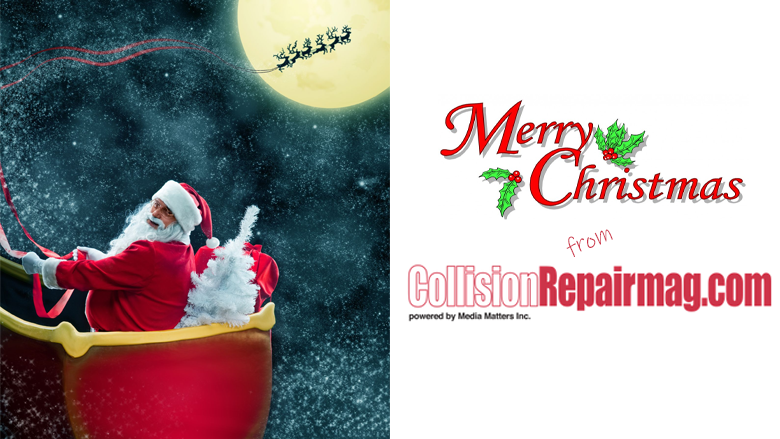 ‘Twas the night before Christmas, when all thro’ the shop,

Not a power tool was stirring, nor even a mop;

The spray guns were hung by the paint booth with care,

In hopes that St. Nicholas soon would be there;

The technicians were nestled all snug in their beds,

While visions of OEM procedures danc’d in their heads,

I sat in my office, eyes watching the clock,

Waiting for nothing but to close up the shop.

When out in the lot there arose such a clatter,

I sprang from the chair to see what was the matter.

Away to the window I flew like a flash,

Tore open the shutters, and threw up the sash.

The moon on the breast of the new-fallen snow,

Gave the lustre of mid-day to objects below;

When, what to my wondering eyes should appear,

But a smashed-up Honda Civic, with no idea how it got here.

A little old driver popped out, so lively and quick,

I knew in a moment it must not be St. Nick.

More rapid than eagles she ran ‘round the yard,

She whistled, and shouted, and call’d out for help:

“Is there anyone here? Any person around?

I need my car fixed; I need to be homebound.”

I arose from my chair and went down to the door.

“Can I help you with anything? Anything at all?”

As she told me about what her collision implied,

I pondered my brain for any fast fixes in mind;

I told her to wait, and to the shop floor I flew,

With a box full of tools, and the Honda Civic, too.

And then in a twinkling, I took to my work,

Did an estimate, disassembled and revised in a flash,

The clock had struck midnight when I heard a great bash.

With a jolt and a jump, I turned right around,

When, down the chimney, St. Nicholas came with a bound:

He was dress’d all in fur, from his head to his foot,

And his clothes were all tarnish’d with ashes and soot;

A bundle of tools was flung on his back,

And he look’d like a peddler just opening his pack:

His eyes⁠—how they twinkled! his dimples how merry,

His droll little mouth was drawn up like a bow,

And the beard of his chin was as white as the snow;

The stump of a pipe he held tight in his teeth,

And the smoke it encircled his head like a wreath.

He had a broad face, and a little round belly

That shook when he laugh’d, like a bowl full of jelly:

He was chubby and plump, a right jolly old elf,

And I laugh’d when I saw him in spite of myself;

A wink of his eye and a twist of his head

Soon gave me to know I had nothing to dread.

He spoke not a word, but went straight to the car,

He Bondo’d the body and painted the door.

And when he was finished, he flashed me a smirk,

He fill’d all the tech’s stockings; then turn’d with a jerk.

He gave me a nod, and up the chimney, he ran.

Leaving my dazzled, alone, spray gun in my hand.

Still dazed, I went to the customer to see,

That she was still waiting, her eyes filled with glee.

“Did you fix it, sir? Will I be home on Christmas Eve?”

I smiled, nodded and peered out to the lot,

“Not by myself, however, there was some help that I got.”

“Thank you so much, Merry Christmas to you,”

and out of the shop, to the fixed car, she flew.

Behind her, St. Nicholas soared through the sky,

reindeer all neighing⁠—oh, what a sweet ride.

I packed up my things and closed down the shop,

And away they all flew, with a skip and a hop.

But I heard him exclaim, as they drove out of sight⁠—

Merry Christmas to all, and to all a good night.