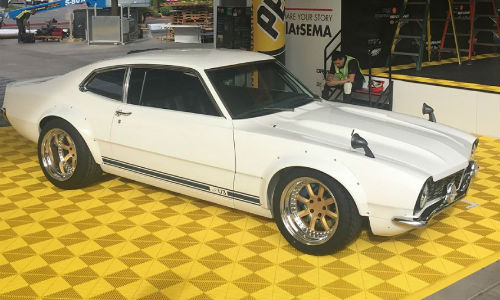 Las Vegas, Nevada — November 2, 2016 — Actor Sung Kang is probably best known for his work on the Fast and the Furious franchise, but his appearance at this year’s SEMA Show was all about his Project Underdog vehicle.

Kang partnered with Shell and SEMA on the project, designed to promote youth outreach and inspire the next generation of enthusiasts. Project Underdog was completed with the help of three high school students from Alhambra High School in Martinez, California, as well as Kang, award-winning vehicle builder Steve Strope and members of the SEMA Garage.

Together the team transformed a 1972 Ford Maverick aptly titled “The Underdog.” Kang first drove the Maverick in a Fast and the Furious movie in Brazil and immediately fell in love with the car. Kang says “the Maverick has always been underappreciated, overlooked and undervalued … ‘The Underdog.’ But those who love her are loyal forever.”

According to an official statement from SEMA Show management, the project highlights automotive education for youth. Following its debut at the SEMA Show, the completed vehicle will be auctioned off to raise money for the SEMA Memorial Scholarship Foundation, which provides financial support to students pursuing careers in the automotive industry.

The build was recorded and shared in a popular online video series filled with raw, behind-the-scenes footage, intimate conversations and real-time progress every step of the way, made possible by SEMA and Shell.

You can check out a promotional video about the project in the player below.