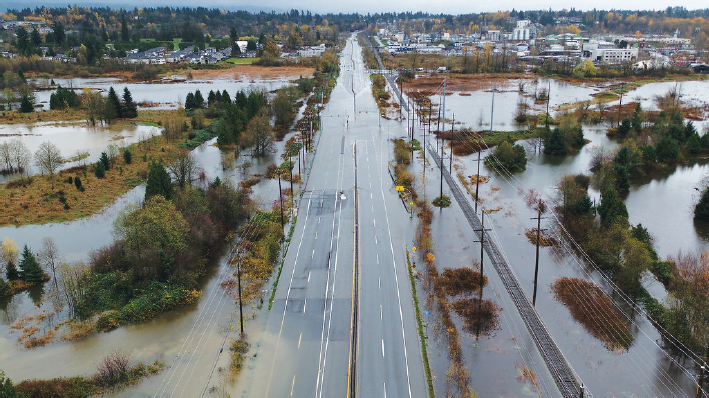 While Wyllie and Kennedy both anticipate further claims to surface, ICBC maintains that it is “too early” to estimate total claims and costs.

“According to the Insurance Bureau of British Columbia (ICBC), the insurer has received more than 1,700 vehicle claims linked to extreme weather events during December. The damage is reportedly wide-ranging and covers everything from fully submerged vehicles to minor and repairable damages. “Insane. It’s just been insane,” said Quen Wyllie from Abbotsford, B.C.’s Aggressive Towing. “It looks like carnage,” said Ty Kennedy of Reliable Towing. “None of our industry have seen this type of disaster.””

Based on analysis of claims received by Manitoba Public Insurance (MPI) between November and March, the public insurer has found that winter tire use reduces collision claim frequency by 6.3 percent. The analysis was based on collision claims over the insurance years 2011/2012 through 2017/2018. Frequency was measured by comparing claim frequency before and after a winter tire purchase for 111,872 vehicles. Of the 111,872 vehicles studied, there were 13,025 winter-month claims occurring before winter tires were installed, and 9,802 winter-month claims occurring after winter tires were installed, said the report. MPI also found that, at temperatures just below freezing on dry pavement, winter tires have been shown to reduce stopping distances by as much as 30 percent compared with all-season tires.

Changes are on the way for the Alberta auto insurance industry as the provincial government announced new measures to streamline claims processing for not-at-fault drivers. Effective January 1, Alberta drivers are now able to claim vehicle damage that they are not responsible for to their own insurance company and not that of the at-fault driver. The new coverage, known as direct compensation for property damage (DCPD), is legislated in Bill 41, the Insurance Amendment Act, which was passed into law a year ago. The Insurance Bureau of Canada’s western vice-president, Aaron Sutherland, says this will create a more efficient system in Alberta, and one that aligns with similar systems in other provinces. “Your own insurance company will pay for repairs to your vehicle when you are not at fault for an accident,” said Sutherland. “If someone else hits your car, it requires your insurance company to subrogate those damages back to the insurer of the at-fault driver. That can lead to complications, that can lead to delays, and this (change) eliminates all of that.” DCPD regulation sets out rules for determining who is at fault in more than 40 “accident scenarios,” but those rules do not apply to other types of claims, such as bodily injury. DCPD does not prevent drivers from pursuing legal action for other damages, such as injury damages from an automobile accident or other property damage that is not covered under DCPD.