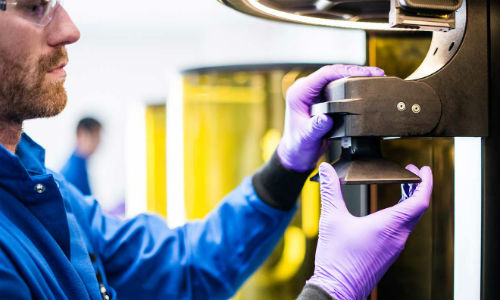 Toronto, Ontario — April 28, 2016 — This week we note the baseball-sized hail in San Antonio, how the situation at Mitsubishi Motors just went from bad to worse and how Ford’s experimenting with 3D printing.

– Chrysler designers managed to create their own recall. Certain models of Chrysler, Dodge and Jeep vehicles will have to install a software tweak to correct a confusing gear shifter. The “Monostable gear shifter” was installed on 1.1 million cars. According to Autoweek “the shifter returns to the default centre position without giving the driver sufficient feedback as to the selected gear.” The design flaw has “caused 121 accidents and 41 injuries,” according to the report.

– Texas continues to suffer intense weather. Some suspect the warming climate means more moisture is building up in the air along the gulf coast, creating the intensive weather patterns that have created some huge hail storms this spring. PDR techs are busy. Baseball-sized hail has been reported in San Antonio. The hail “annihilated” inventory at local car dealerships according to a local media report. Hail was measured up to 3 inches in diameter in the far western Hill Country. Golf ball-sized hail was reported in other areas.

– According to a headline this week, “The situation at Mitsubishi Motors just went from bad to much, much worse.” The Japanese automaker admitted Tuesday that “it had falsified fuel efficiency tests for the past quarter century…” That’s twenty five years. Wow. Shares plunged 10 percent right after the announcement. Since the cheating was first admitted a couple of weeks ago the company’s stock has lost half its value. Nissan cars are caught up in this, as Mitsubishi did manufacturing for that company. Japanese authorities raided Mitsubishi’s offices last week.

– There is, apparently, a Chinese “Tesla Killer”, a car named LeSee manufactured LeEco, a massive player in China’s electronics and tech sectors. This is one to keep an eye on.

– The Wall Street Journal reports that Ford is experimenting with a new form of 3D printing that “could solve a structural flaw that has kept the technology from widespread use in manufacturing.” As it is, the “most widely used version of the technology is ill-suited for mass production because objects are printed layer by layer, a slow process that also creates tiny fault lines that can crack when stressed.” Carbon3D, a new company backed by Google’s holding company Alphabet, has a process whereby, “printers project light continuously through a pool of resin, gradually solidifying it onto an overhead platform that slowly lifts the object up until it is fully formed. The process takes a fraction of the time of other printing methods, and forms solid items more similar to those created using conventional auto part molds.”

– Alphabet also announced that it, along with Ford, the ride-sharing service Uber and two other companies are “forming a coalition to push for federal action to help speed self-driving cars to market,” according to a report. Volvo, now owned by China’s Zhejiang Geely Holding Group Co, and Uber rival Lyft are also are part of the new Self-Driving Coalition for Safer Streets. A statement released by the group said it will “work with lawmakers, regulators and the public to realize the safety and societal benefits of self-driving vehicles.”

– Last week at the first conference on automated vehicles to be held in Canada, panelists talked about the way a dozen or so big “mobility” companies would form out of the OEMs, tech companies and app-based sharing programs. The report on the coalition noted that the National Highway and Traffic Safety Administration had ruled last February that “artificial intelligence system piloting a self-driving Google car could be considered the driver under federal law…” This is considered “a major step toward winning approval for autonomous vehicles,” according to the report. An important first task for the new coalition will be to “work with civic organizations, municipalities and businesses to bring the vision of self-driving vehicles to America’s roads and highways.”

The company reported that in January 2016 it completed an amendment to its credit facility that increased the amount available to LKQ from $2.3 billion to $3.2 billion. LKQ also extended the maturity to January 2021.

LKQ borrowed $1.2 billion from this facility to fund its March acquisition of European parts company Rhiag-Inter Auto Parts Italia S.p.A (“Rhiag”). Rhiag is a “Pan-European business-to-business distributor of aftermarket spare parts for passenger cars and commercial vehicles” that operates through 252 distribution centres and 10 warehouses, and serves more than 100,000 professional clients in 10 European countries.

On April 21, 2016, LKQ also completed its previously-announced acquisition of Pittsburgh Glass Works LLC (PGW). PGW is a global distributor and manufacturer of automotive glass products. In addition to the Rhiag and PGW acquisitions, during the first quarter of 2016 LKQ acquired a wholesale salvage business in Sweden. Expect the acquisitions to continue. There’s almost another billion dollars in that credit facility yet to be spent.

– Axalta Coating Systems also announced its financial results for the first quarter ended March 31, 2016. The company recorded net sales of $955.6 million for the first quarter of 2016. This is an increase of 3.0 percent year-over-year and excludes an unfavourable foreign currency translation. Taking the currency into account this is actually a decrease of 3.4 percent year-over-year. Net sales growth was driven by a 5.1 percent higher average selling price. The price increase was offset by a 2.1 percent decline in overall volumes, “primarily from slower demand in Latin America,” according to the press release. “Excluding Latin America, overall volumes increased low single digits for the quarter.”

The unfavourable foreign currency translation reduced net sales figure by 6.4 percent. Adjusted earnings before taxes, interest, depreciation and amortization were $194.8 million for the first quarter. This is an increase of 7.0 percent from $182.0 million in Q1 2015.