Friday Fun: Former NFL player arrested for staged collisions, collision avoidance is making cars too expensive and why you should close your doors 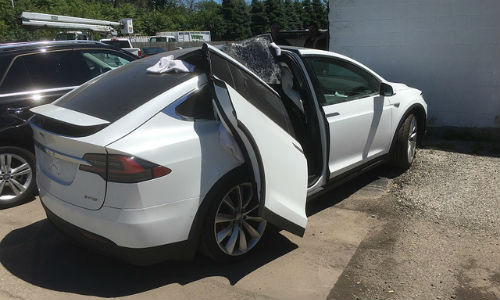 Toronto, Ontario — July 7, 2016 — Overlooked news from the automotive world over the past week includes the evolution of car jacking, a former NFLer has been arrested for taking part in staged collisions and the German car industry seems to be in hot water again. On the plus side, it’s nothing to do with emissions.

– NFL players are famous for squandering their wealth. Former Kansas City Chiefs’ wide receiver Jeffrey Leon Webb seems to be yet another former NFLer in need of some cash. He was recently arrested for “orchestrating four staged collisions resulting in a total loss exceeding $139,000 … Webb, as the alleged ringleader, reportedly received a bulk of the money paid by the victim insurance companies. After one of the targeted insurance companies suspected fraud, the California Department of Insurance launched an investigation revealing that the organized ring used both privately owned and rental vehicles that they purchased insurance coverage for and purposefully crashed into poles or curbs. Although the collisions only resulted in minor damage to the vehicle, Webb and the co-conspirators all requested medical assistance and to be transported.”

– An analysis from the website Bankrate.com finds that a “median-income household in the US could not afford the average price of a new vehicle in any of the 50 largest cities in the country…” The average price of a new car or light truck in 2016 is about $34,000 according to Kelley Blue Book. The new higher prices are “because new cars are loaded with helpful but expensive safety features like collision-avoidance systems.”

– We’re saddened to announce that Crawford Taylor has passed away. Taylor was head of Enterprise Rent-A-Car at one time and was responsible for developing the now-common practice of offering a rental car while someone’s primary vehicle is in a collision repair centre.

– A report finds that “Police and car insurers say thieves are using laptop computers to hack into late-model cars’ electronic ignitions to steal the vehicles, raising alarms about the auto industry’s greater use of computer controls … The discovery follows a recent incident in Houston in which a pair of car thieves were caught on camera using a laptop to start a 2010 Jeep Wrangler and steal it from the owner’s driveway. Police say the same method may have been used in the theft of four other late-model Wranglers and Cherokees in the city. None of the vehicles has been recovered.”

– More trouble for the German car industry. Germany’s antitrust watchdog launched a steel price-fixing investigation into some of the same car makers already in trouble for the diesel emissions scandal. Daimler, BMW and Volkswagen confirmed this week their offices had been raided in connection to the case.

– Spotted at an auto body shop in Illinois: A Tesla Model 2 with the doors ripped off. Apparently the owner tried to back out of the garage with the gull wings up. Whoops.

– A new app created by a Stanford freshman uses “previously successful appeal letters to draw up a customized template, allowing users to avoid courts, legal fees, stress, and having to use a lawyer.” According the report, “So far, the free app has overturned 160,000 parking tickets in London and New York. With a success rate of 64 percent…”

The app, called DoNotPay, has “appealed $4 million in parking fines in just two cities in only nine months of operation.” The author of the app read through “thousands of pages of documents related to parking tickets released under the Freedom of Information Act and consulted a traffic lawyer,” to create the app. These programs are becoming more common and are expected to put some lawyers out of work. DoNotPay is not commercial and the author plans to “keep it that way.” The author said he was “driven by a sense of social justice and a desire to help vulnerable people who are exploited by policing-for-profit schemes.” He describes his creation as “the first robot lawyer.”

– This is a real advance in car options: A new Audi system detects if something is coming up alongside your car while you’re opening the door. This will be popular in large urban centres where the debate between bikers and car drivers has become heated. The phrase “door prize” is a term for when a biker hits the edge of a door being opened, which happens several times a day on Toronto’s dangerously crowded and narrow streets.

– Paris has recently banned all cars made before 1997 to reduce pollution. Anyone driving an older car or an old motorcycle will no longer be welcome in the streets of the French capital on weekdays. The ban does not apply to police and customs vehicles, emergency vehicles, and vehicles that transport cash. Classic cars and vehicles transporting goods to the city’s green markets will also be spared under the new rules.