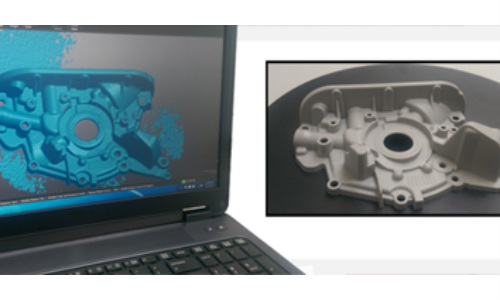 Similar to 3D printing, additive manufacturing sees metal powders used to build up a part one layer at a time from a digital plan.

“Simply put, a lot of people don’t know about this,” says Chief Operating Officer Christopher Tomko, in a conference call with Collision Repair magazine. “People know 3D printing with plastic. But they often don’t know additive manufacturing with metal. This is a whole new thing.”

Freshmade 3D has targeted the auto restoration market, which now represents the bread and butter of the company’s business.

“People are used to spending months or years going through warehouses trying to find a part. Here we’re using digital manufacturing to make that part in just a couple of weeks,” says Tomko.

What the company offers is a link between the restoration market and this new technological sector. “Being able to make custom short run parts is not one of the largest markets in the world. But it takes a special kind of company that can connect those in the custom car market and translate that back to the additive manufacturing sector. I can talk to the car guys in their language. And I can connect them to the world of additive manufacturing,” says Tomko.

Most importantly, the company can produce a new part even if an original is not available. “It depends on how much information you have to work with,” says Tomko. “Sometimes it’s simply a matter of taking a left side part and flipping that to make a missing right hand side part. That can be almost easy. We’re just flipping and reproducing. At the other end of the spectrum is a case where you might not have a part, but just a photo. But we can work from there.”

By mixing some artistry with the magic of computer-aided design, a new blueprint for that missing part can be drawn up. That design is then fed into the additive manufacturing machine to print the part.

“You need to digitally reverse engineer the part. That’s the gap area. Most shops can’t do that,” says Chief Technical Officer Brett Conner. “You need some artistic ability to redo it and make that digital thread. That’s what we provide. That’s what Freshmade is here to do. That final thread is what we bring to the customer.”

Generating the design is a key part of the process. Getting it right takes a both artistic and technical skill.

“If it was easy everyone would be doing it,” says Conner. Getting the design right can take some time, but going through the process can pay off. Tomko relays a story of one client who had for years been working on the restoration of a Mercedes Gull Wing.

“He had everything on that car but he didn’t have an original key,” says Tomko. “But when you’re talking about the highest level of restoration and competition you’re going to want that. We digitally recreated it in CAD and then produced it. It had a jewelry-like quality level. Now when he’s at a show, he has an original key that works like it came with the car 60 years ago.”

No wonder then the company is attracting the attention of high-end car restorers. But the Freshmade execs note that the custom car world could also benefit from this technology—they promise some announcements about new services for custom car shops are forthcoming.

“That’s the thing about this field, the technology is always evolving. There are some new things coming. Often custom shops are not big shops. They can’t invest in a major 3D system. It’s hard to stay on top of the tech in this sector. That’s our role. We come up with new ideas, provide some solutions that you can’t get anywhere else,” says Tomko.

“The shops are our best friends. But we’re also willing to work directly with someone with a custom auto,” says Conner.

The CEO of Freshmade, Rich Wetzel, was also on the conference call. He noted that the company is part of the Youngstown Ohio Business Incubator, which is focused on accelerating new manufacturing processes. Additive manufacturing is obviously one of these. This summer the company is working on a unique project that promises some high profile exposure for the company. Freshmade is creating a life-size Donald Trump bobblehead that will be on display at the Republican National Convention in Cleveland, as well as a Hillary Clinton version for the Democratic National Convention.