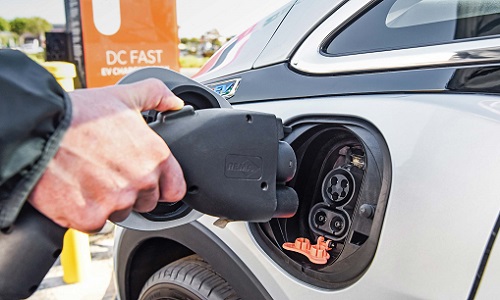 Toronto, Ontario — In this week’s EV/AV report, Earth Day Canada kicks off a new electrifying endeavour, Durham Region sees a bevy of new EV chargers and we look back on the inventor of Canada’s first gas-powered vehicle.

we look back on the first

As of November 24, 2020, Earth Day Canada kicked off its EcoCharge program which will see 100 level 3 EV fast-charging stations installed in the parking lots of IGA stores across Quebec and New Brunswick by autumn 2021.

With the support from a $5 million donation from Natural Resources Canada, this program has been able to take-off, with the hope of moving more Canadians towards electric transportation.

“Earth Day Canada wants to inspire citizens to transition to electric vehicles by focusing on customer experience. Our charging stations are among the fastest on the market and are strategically located in order to facilitate the transition to electromobility,” says Pierre Lussier, President of Earth Day Canada. “In fact, using the EcoCharge network means contributing to protecting the environment in two ways— encouraging the electrification of transportation and supporting Earth Day Canada’s programs at the same time.”

There will be two charging stations placed in 50 supermarket parking lots between the two provinces, ultimately giving drivers access to a quick and easy way to charge-up while they shop. The program will also see the proceeds from the 22nd of every month donated to local organizations within the 50 municipalities.

The Government of Canada’s commitment to a clean energy future just took its next steps by announcing a nearly $300,000 investment to install 60 electric vehicle (EV) connectors in the Regional Municipality of Durham.

This announcement came on Friday from Ryan Turnbull, Member of Parliament for Whitby, on behalf of the Honourable Seamus O’Regan, Canada’s Minister of Natural Resources. To date the Canadian government has provided over $300 million to establish a coast-to-coast network of fast chargers along with charging stations in more localized areas such as apartment complexes, on-street and workplaces.

“These 60 new EV charging connectors show Durham Region’s commitment to leading the way in the technologies and jobs of the future. Greener options stimulate economic growth and create job opportunities in our community,” says John Henry, Regional Chair and CEO of the Regional Municipality of Durham. “Durham Region has taken important steps to accelerate the transition toward a low-carbon, climate-resilient community. We’re working with our public and private sector partners to make it more convenient to switch to electric vehicles and reduce carbon emissions.”

The funding for these initiatives is provided through Natural Resources Canada’s Zero-Emission Vehicle Infrastructure Program (ZEVIP), which helps to support the federal government’s target to only sell zero-emission passenger vehicles by 2040. Combined with its commitment to providing good jobs, supporting natural resources, and strengthening the economy, the Canadian government continues to make strides towards a greener, cleaner nation.

With electric and autonomous vehicles (EV/AVs) at the forefront of new technology in the automotive industry, it may make you think about just how far we’ve come, and who helped us get there, in the development of transportation.

Very few Canadians may know of a man named George Foote Foss, but it is him we owe thanks to for building the first gasoline-powered vehicle in Canada. Originally from Sherbrooke, Quebec, Foss got the idea to build a powered vehicle after a trip to Boston in 1896 and riding in a battery-powered wagon, which he noted only had power for about 30 minutes.

Foss completed his “car” in 1897, which was around the same time that the likes of Karl Benz and Henry Ford were also developing small gas-powered engines. This put Foss up there as one of the very first inventors to use an internal combustion engine to power a vehicle.

Foss only ended up building the one vehicle aptly labeled the “Fossmobile”, by studying rudimentary concepts of single-cylinder engines and with parts used from his own machine shop, Geo. F. Foss Electric & Machine Works. Though he could have become an automotive industry innovator, he passed on multiple financing opportunities as he didn’t want debt, according to his grandson, Ron Foss.

Ron is currently in the process of building a new replica of the “Fossmobile”, as a tribute to his grandfather and the history of Canadian automobile manufacturing. Unfortunately, though, there are no blueprints of Foss’s design so Ron is having to do a lot of reverse-engineering and measuring from the photos available. Several local shops have also gotten involved with the process, and a campaign has been started to help finance the project, which hopes to ultimately see the replica on display in the Canadian Automotive Museum.