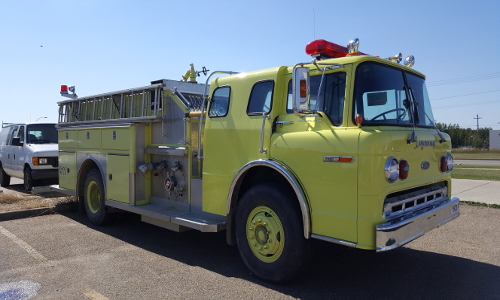 Edmonton, Alberta — October 16, 2017 — Empire Collision in Edmonton, Alberta, has joined together with other businesses in the province’s capital to donate a newly refurbished fire truck to a city in Honduras.

The Edmonton-based taskforce, which was put together by the Riverview Rotary Club of Edmonton and led by Dr. Roman Bayrock, has refurbished a 1985 Ford fire truck that will be commissioned for immediate service in Roatàn, Honduras.

Mechanical repairs to the fire truck were donated by Alberta Honda. In turn, the dealer suggested Bayrock should contact Empire Collision about the bodywork. Empire Collision operates three locations in the Edmonton area. According to General Manager bill Johnson, the team “jumped at the opportunity” and worked on repairing the truck’s cabin and cleaning up the vehicle’s rust.

“The project was a lot of fun and the guys here at Empire Collision really enjoyed working on it. If Roman ever had any future projects we would definitely consider working on them. It’s good fun for us and it’s for a great cause,” said Johnson in a recent interview with Collision Repair magazine.

Bayrock, who has previously sent emergency vehicles to communities in need, including sending several decommissioned ambulances to Belize, said it takes a number of people working together to make something like this happen.

“It’s our community coming together for the good of another community. There are a number of people that need to say “yes” to get that truck to Central America,” he said.

Grande Prairie Rotary Member Frank Havies, a former firefighter, is set to drive the truck to Florida. From there, it will reach its final destination of Honduras via shipping barge.

The donated truck is the latest example of firefighting support from Alberta to Honduras. In 2014, the Grande Prairie Rotary Club donated a floating pump and paid the airfare for a contingent of firefighters to train Honduran firefighters with basic skills, such as vehicle extrication and search and rescue.