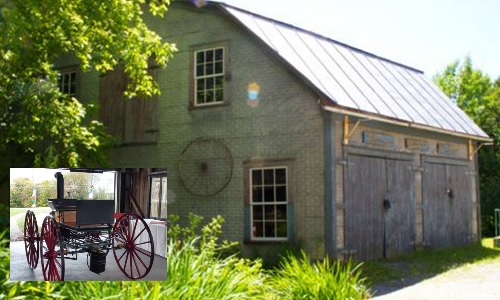 Ottawa, Ontario — July 1, 2018 — Collision Repair magazine has tracked down the location of Canada’s first auto repair facility in Stanstead, Quebec. Repairs at the location, which is now an art gallery, can be safely dated back to 1867, almost twenty-five years before the generally recognized claimant to the title.

The general consensus is that the honour belongs either to the Walkerville Wagon Factory in Windsor, Ontario, or to the Mimna Company facility of Wardsville, Ontario.

Unfortunately for the general consensus, it is dead wrong. As some trivia buffs will know, the first car to be manufactured in Canada was the steam buggy, an invention of the eccentric watchmaker Henry Seth Taylor.

While it may have lacked a wheel, internal combustion engine or, as Taylor would soon come to regret, brakes, the steam buggy is credited with being an automobile.

Because his watchmaking tools were designed to machine only malleable metals like tin, gold and silver, Taylor hired the local blacksmith to produce many of the machine’s unique parts. And it is to that blacksmithy that the vehicle returned for repairs after a collision.

During the 1867 confederation celebrations, newspapers reported that Taylor’s demonstration of his vehicle was a disappointment. It had driven into the back of another vehicle and promptly stopped working. By the next year, however, Taylor had solved the problem and the vehicle made its way around the country as a circus attraction.

Unfortunately, the inventor and blacksmith appear to have had a falling-out. A few years later, Taylor drove his brakeless machine down a hill, with predictable results. Having survived the accident, he decided against continuing to use it, salvaging the valves for use on another project.

The blacksmithy – or rather blacksmity and and auto repair facility – still exists, serving as an art gallery. Presented with the evidence the building was, in fact, Canada’s first collision repair facility, owner and curator Gabriel Safdie said he was amused, but not entirely surprised.

“Stanstead has always been interested in new technology,” he said. “In fact, we were also the home of North America’s first movie theatre – in 1912.”

As for the other claimants to the title of Canada’s oldest repair facility, while the Mimna Company did produce vehicles in the facility as early as 1893, there is no evidence to suggest they were performing repairs on them as well.

Founded in 1904, the Walkerville Wagon Factory definitly did both constructed and repaired vehicles on behalf of the Ford Motor Company’s Canadian division.