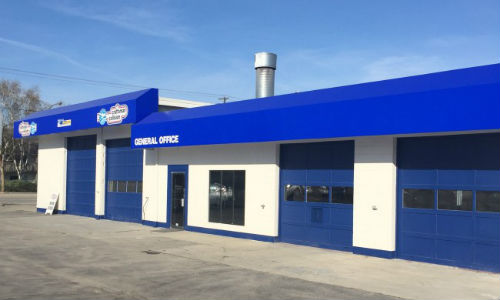 North Vancouver, British Columbia — April 3, 2016 — Craftsman Collision has opened a new location in Rutland, British Columbia, a neighbourhood on the northeast edge of Kelowna. The new autobody facility is Craftsman’s third in the Kelowna area and fifth in the BC Interior.

According to Craftsman COO Rick Hatswell, the new Rutland shop will introduce the community of Rutland and surrounding area to the Craftsman brand, as well as help the company better serve new customers and its insurance partners.

“Craftsman Collision has grown to serve the Okanagan’s community throughout the last 18 years,” Hatswell says. “This new location increases our market presence in the Okanagan and adds service capability east of the city.”

The building was acquired from an existing collision repair business, but has undergone substantial improvements.

“We’ve done major renovations to bring it up to the Craftsman standard,” says Tom Watters, Craftsman’s Regional Manager responsible for the Rutland shop and all Interior locations. “As part of the Craftsman chain, the shop will also have access to the training and specialized equipment necessary to handle repairs on all the new aluminum vehicles coming out, including the popular Ford F-150.”

Long-time Rutland resident Del Horsley leaves his post as manager of Craftsman Collision West Kelowna to take charge of the new Rutland shop, and is delighted to be working closer to home. He has lived and worked in the Kelowna area since 1965, and comes from a background in retail, construction and collision repair.

Like all Craftsman Collision shops in BC, the Rutland shop comes with Craftsman’s exclusive (to bodyshops) membership in the Air Miles rewards program. Card-holding customers receive one reward mile for every $15 on their entire claim, and there is no charge to join the program.

Craftsman Collision operates a total of 40 locations in the BC Interior, Vancouver Island, BC’s Lower Mainland, Alberta, California and China. Craftsman first opened in Vancouver in 1977.

PrevPreviousFriday Fun: Caught on a wire, Tory is tops for Toronto towing and Dyson may get into the car business
NextBoyd Group expands in IndianaNext