Friday Fun: Caught on a wire, Tory is tops for Toronto towing and Dyson may get into the car business 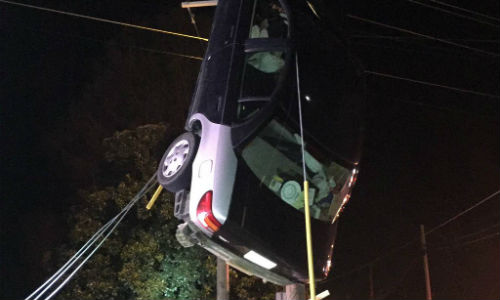 Toronto, Ontario — March 31, 2016 — It’s time for another edition of Friday Fun, the weekly feature where we shine a light on the items you may have missed in the last week.

– This is the sort of thing that professional stunt drivers train for years just to attempt, but one woman in Tennessee managed to do it by accident. Her car went off the road, hit a fence and then drove up a guy-wire. Her car then continued up the pole and her front tire got caught on one of the wires. She was reportedly left dangling for about two hours before help arrived.

– Toronto Mayor John Tory has been great for the towing industry. According to various media reports, towings doubled last year as a result of the Mayor’s crackdown on illegally parked cars in the city core.

– Google claims its automated vehicles are performing well in tests. At least one person doesn’t agree. According to Deborah Milller, as reported in the San Jose Mercury News, Google cars have almost caused her a couple of accidents!

“I exited Highway 101 to Shoreline Boulevard, driving toward the Googleplex. I stopped at the red light at Charleston. I was in the left-turn lane, and started to move forward on the green arrow. As I started to turn, a Google car in the opposite direction headed toward me, going straight through the intersection. Luckily, I was alert and I stopped in the middle of the intersection. The Google car must have gone through its red light. It would have T-boned me had I exercised my right of way,” Miller writes. She also describes the second incident: “I was on El Camino Real in Mountain View, stopped at a red light, waiting to turn right on San Antonio Road. The car in front of me was a Google vehicle. When the light turned green, it started to go. Then I started to go. The Google car went a few feet, then stopped hard for absolutely no reason. Luckily, I was alert and not following too closely, and I was able to stop.”

– The US-based Insurance Institute for Highway Safety (IIHS) is “shining a light” on poorly performing headlights. According to the IIHS, there is a wide variation in the lighting capabilities of different headlights. The lights on a Toyota Prius are considered top-of-line. The halogen headlights on a BMW 3 Series are considered less than great.

– According to leaked documents, vacuum cleaner company Dyson is building an electric car. The company has received money from the UK government to develop the vehicle, according to the leak.

– A German research group, ADAC, has found a security risk in keyless cars. According to the report “Audis, BMWs and Fords among the vulnerable cars.” The flaw reportedly affects at least 24 different models of car. “The research group discovered that using a cheap power amplifier boosted the range of the remote, tricking cars into thinking the key was in their hands and allowing them to unlock cars from up to 100 metres away, even through walls,” according to the report. “Because the same keyless remotes start the ignition in the car, would-be thieves could use the same signal-boosting process to drive off with no need for a broken window or stolen key. Once started, the cars can be driven until the fuel runs out or they stall. ADAC claims the signal-amplifying device is simple enough to be made at home and can be bought online for well under $50 CAD.

– A new Frost & Sullivan report expects that a record number of older cars in Europe will soon lead to a boom in brake jobs. “The current average vehicle age of 9.4 years has placed more vehicles in the prime replacement range for a brake job, giving a huge boost to the aftermarket demand for brake pads and rotors. The aging of vehicles in operation has been backed by the decreasing service life of brake components, particularly the rotors, further aiding the aftermarket suppliers,” according to the report. The average age of vehicles in North America is even older, now over 11 years.

– Half of the new cars sold in the UK in 2015 have some form of self-driving tech, according to a story in the Express. “More than half of the new cars bought in 2015 were fitted with collision warning systems, adaptive cruise control, autonomous emergency braking and blind spot monitoring. These semi-autonomous vehicle technologies not only make driving easier, but also have the potential to significantly reduce the risk of serious accidents,” according to the report.

– China has issued guidelines to encourage the sale of second hand vehicles which was hampered due to the imposition of emission limits on used cars. The nation definitely needs to do something with its used vehicles, as car sales in the country have boomed in recent years. China now has about 172 million cars, increasing by about 24 million a year.

– The price of car insurance policies may drop radically as autonomous vehicles become common. Based on data from connected car insurer Metromile, there are predictions that self-driving cars could have insurance costs as low as $250 a year.