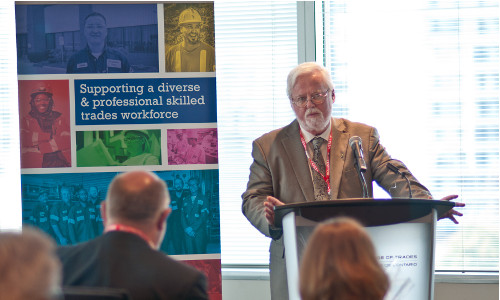 Toronto, Ontario — November 13, 2017 — Over the next 10 years Canada will lose hundreds of thousands of skilled tradespeople due to retirements, according to the Ontario College of Trades.

Guiding young people, women, indigenous peoples, new Canadians and those with disabilities into the collision repair sector is the key to filling the skills gap, says the Ontario College of Trades, who are doing their part to help.

The college hosted its first ever diversity and inclusion symposium, with the aim of exploring ways of working together to strengthen opportunities to retain, up-skill and increase the participation of underrepresented groups in skilled trades.

“All stakeholders have a collective responsibility to identify and share work together to implement diversity and inclusion initiatives that will help strengthen Ontario’s skilled trades workforce,” said Pat Blackwood, former chair of the College’s Board of Governors, during his opening remarks.

Seven speakers – including Sarah Watts-Rynard, Executive Director of the Canadian Apprenticeship Forum, and John Norris, Executive Director of the Collision Industry Information Assistance – spoke of the challenges and how barriers can be broken down to encourage traditionally underrepresented groups into skilled trades and apprenticeship programs.

The college said it aims to break down these barriers through some of its own initiatives, and will continue to work with industry leaders who have similar interests and goals.

“We’ve seen evidence that the percentage of women in the skilled trades is increasing, though not as quickly as we would like, and immigrants and racialized minorities still face barriers,” said Wendy Cukier, Founder and Director of Ryerson Diversity Institute.

Sally Harvey, Director of Educations and Labour Development at Landscape Ontario, agreed. Harvey views diversity in the workforce as a “critical component” to any business. She said: “It’s smart business and it makes sense. We’ve got to come together and start partnering to create those solutions.”