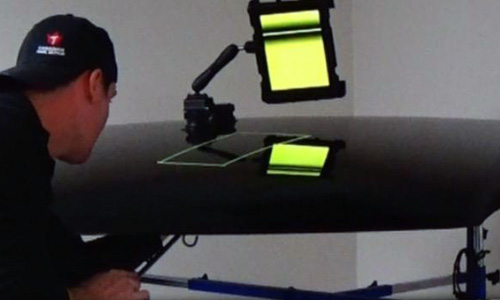 Technicians looking to measure and photograph dents have a new tool at their disposal. Ottawa, Ontario-based company Collision Magicians has announced the release of a new app for tablets and smartphones that allows users to measure, photograph and repair hail-size dents on exterior vehicle panels.

The Dent Light app uses multi-coloured images to create a reflection on a panel’s surface area. The process highlights the damage and allows the user to take better pictures to accurately measure dents.

Steve Hartley, the owner and operator of Collision Magicians, explained to Collision Repair magazine how he came up with the business idea.

Turns out, the story involves a collision.

“The idea came to me while doing my route work at a local bodyshop,” says Hartley. “I had been parked outside beside the job I was working on and when I finished I pulled out of the spot at the same time as the guy across the parking lot. We ended up rear-ending each other. The other guy insisted on calling the police, and, as you know, police don’t come running for parking lot damages.”

With some time to kill, Hartley started to triple-check the job he had just finished. His eye caught something in the repair area, “and as I continued to scan my eyes over the area, I just happened to have my phone in my hand. As luck would have it, I was reading a hockey article about referees and was able to use the lines on the refs jersey to highlight the less then perfect repair I had made.”

After checking the AppStore and seeing there was no app that offered this service, Dent Light was born. Hartley hired a development company, and the product came to be. “I guess you could say Dent Light was created by accident,” he says.

As for helping the average technician, “I think its going to be different for the type of tech they are,” says Hartley. “After all, Dent Light makes it so a customer can do a quality inspection on their repairs. So for a good tech, Dent Light is a way to prove to his customers a quality repair was done. For the less talented techs I imagine they will fear their customers getting their hands on a Dent Light.”

He thinks the product will have the biggest impact in the DIY market. “Every current dent repair kit consists of glue pullers, suction cups and metal rods, but no light. This is a problem, as the one thing all experts depend on is a light to make quality repairs,” he says. Dent Light will be the first light available for DIY-ers.

The app comes with a built-in hail matrix and user guide. Dent Light launches July 7, and retails for $6.99.