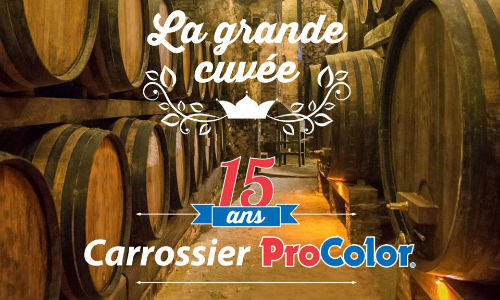 The franchise was officially launched on May 10, 2001, under the name ProColor Prestige. Back then, the network included 39 collision repair centres. The network has grown exponentially over the years. Today there are 158 Carrossier ProColor locations across Quebec.

The network’s 15th anniversary will be celebrated at Carrossier ProColor’s annual conference on May 12 and 13 at the Château Frontenac hotel in Quebec City. Close to 500 participants will take part in the festivities under the theme The Grande Cuvée. Among other highlights at the conference, 43 collision repair centres that joined the network during its first year will be honoured.

“The Grande Cuvée theme was chosen to draw a parallel between producing a great vintage wine and our network which we consider a Grand Cru in the collision repair industry,” says Mary Jayn de Villers, Marketing and Communications Director at Carrossier ProColor. “Just like our business recipe, several important elements are necessary to produce a great wine: the best ingredients, trusted business partners, a dedicated and passionate team of employees and a very tight control of standards and procedures to generate a product of superior quality.”

Carrossier ProColor has no intention of letting its 15th anniversary pass by without celebrating. A few of the highlights the network has promised:

– The creation of a unique cake for the annual conference, designed by Dominique Matte, cake designer and host of the TV show “C’est plus que du gateau” on Canal Vie, which has been documented in three 30-second video capsules;

– A commemorative corporate video hosted by comedian Jean-Marie Corbeil which will be unveiled at the annual conference;

– A Facebook contest which will be launched on Carrossier ProColor’s page in June.