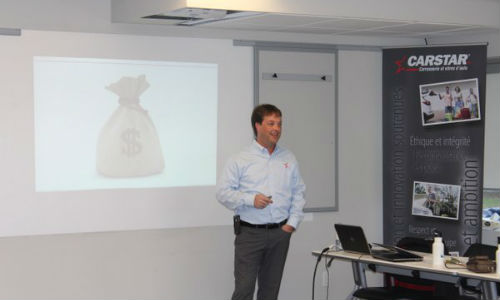 Hamilton, Ontario — May 10, 2016 — Students in Tropicana Employment’s 2016 Pre-apprenticeship Auto Body Class received a rare opportunity today, when CARSTAR Vision Park hosted them for a day of education and demonstrations. 3M and AutoQuip Canada were also on hand to provide some of the demonstrations and give the students a chance to see cutting edge technology.

Collin Welsh kicked off the event, introducing other members of the industry to the visiting class and detailing some of what they could expect to see during the day. Welsh is CARSTAR’s Regional Development Manager for Eastern Ontario.

Welsh led off by pointing out how the modern collision facility has evolved from the traditional body shop into a more “retail” environment. He also noted that an aging workforce means many opportunities for young people who are interested in the business. He filled the students in on the numerous roles available in today’s collision centres beyond that of the traditional technician.

These roles include painters, damage appraisers, preppers, glass techs and paintless dent repair (PDR) technicians. Welsh noted that glass and PDR work is still often subcontracted, but the number of collision facilities performing these operations in-house is growing. Finally, he pointed to two areas that the students may not have considered: customer service and management.

Regarding management, he pointed out that CARSTAR has franchise opportunities, but that manager-level personnel are often needed at existing facilities.

“Many of our franchise partners today started out on the floor, but management also includes production managers and other roles,” he said.
Welsh also filled students in on some of the history of CARSTAR and the current state of the organization, including its relatively recent purchase by Driven Brands.

Bill Davidge of CARSTAR was next up, discussing damage appraisal and estimating. This wasn’t just a classroom affair. After a brief introduction, Davidge led the class outside to examine a damaged vehicle.

Part of the day was dedicated to demonstrations of new equipment from AutoQuip Canada and 3M. After the demos, the students returned to the classroom for a presentation from Matt Bell, CARSTAR’s head of human resources. He filled them in on interview tips and the best way to present themselves when seeking employment.