MAKING IT A WHOLE THING

The public spectacle caused by a flaming Tesla in downtown Vancouver raised some red flags with Transport Canada, as the federal regulator’s collision and defect investigation team made an appearance on-scene as part of a newly launched probe into the vehicle.

Transport Canada dispatched its team alongside local fire services and ICBC representatives to “locate and secure the vehicle” after reports quickly circulated that a 2021 Tesla Model Y was engulfed in flames in downtown Vancouver.

Luckily, the driver managed to kick out his driver-side window and escape the inferno without injury before firefighters extinguished the fire. Unluckily (for Tesla), the investigation into this incident is far from over as Transport Canada has “notified Tesla of the incident and is currently making arrangements for a joint inspection of the vehicle in an effort to determine the cause of the fire.”

The agency’s American counterpart, the National Highway Traffic Safety Administration, told Reuters on May 26 that it “is aware of the incident and has reached out to the manufacturer for information.” Tesla has yet to issue any statement on the incident. 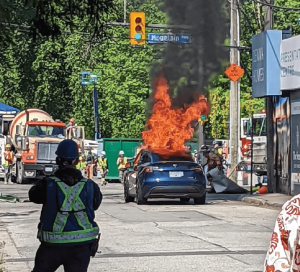 In an arrangement with Toyota Canada, VCC received a Toyota Mirai, one of the first FCEVs on the Canadian market. These vehicles mix hydrogen with oxygen in the air, creating electricity that powers the vehicle. The only by-product emitted is water, making it a zero-emission alternative to traditional gasoline-based vehicles.

This strategy of preparing students for a future with new, carbon-neutral technologies falls in line with the province’s Hydrogen Strategy which will promote job creation in the clean tech industry, along with EV and FCEV adoption. Taxes and other regulations may shift the British Columbian market towards greener vehicles even faster than anticipated.

According to the school’s press release, the college’s Automotive Service Technician program oversees one of the largest working garages in the province and more than 600 students have graduated in the last two years alone.

VCC is also the first academic member to join Hydrogen BC, the regional branch of the Canadian Hydrogen and Fuel Cell Association (CHFCA). 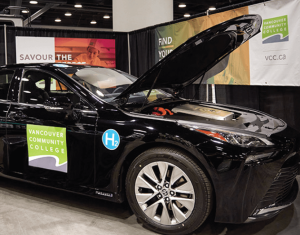 It’s been two long years since the Stan Kingshott West Coast Classic golf tournament took place and Lordco Auto Parts is partnering up with CARPAK Distributing Corp. to deliver what should be an unforgettable day on the green.

The annual charity golf tournament, dedicated in memory of tournament co-founder and former president of CARPAK Distributing Corp. Stan Kingshott, typically brings together much of the west coast collision repair community but has been postponed for the past two years due to COVID-19 gathering restrictions.

This year, 36 teams of four golfers each will battle it out at the Vancouver Golf Club, located in Coquitlam, on Aug. 8. Organizers are encouraging those who are interested in attending to get themselves on the guest list, as space in the tournament is limited.