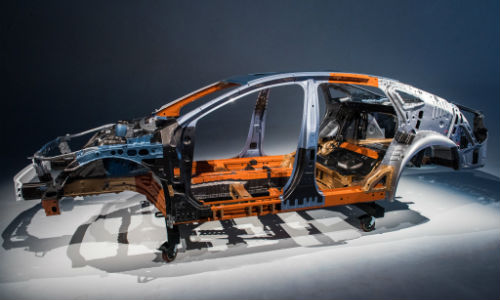 Toronto, Ontario — May 16, 2016 — The most recent Guild 21 teleconference featured presenter John Eck of General Motors. Eck is the Manager, Wholesale Dealer Channel for General Motors Customer Care & Aftersales. He is responsible for managing the collision business, including GM Dealer wholesale parts strategies, programs and industry relationships. He had some interesting things to say about a potential GM collision repair shop certification program.

Eck speculated on the remarkable wave of change flooding through the industry right now. His presentation delivered some interesting insights into the rapidly evolving nature of the industry.

“Our vehicles are becoming more complex, and this is affecting the repair process as well. It’s necessary to take a step back and think about the change we’ve seen and understand that the change is not going to slow down,” said Eck. “The technology around ride sharing and AVs … our industry is abuzz with the latest trends and technologies.”

Vehicle complexity is continuing to increase. OEMs are increasingly demanding vehicles be restored according to precise repair procedures as materials like aluminum and high-strength steel are utilized in new vehicle designs. The struggle between the OEM repair procedures and low-cost repairs is playing out at a more intensive level than ever.

One of the things that GM can do to enable better repairs, according to Eck, is to “make repair information easier to access,” and he says this is something GM is working towards.

He also noted that the company’s website had been redesigned to help the collision repair industry. “We’ve expanded the program information. Coming soon, I am promised, we will have a complete paint code section on this website. That’s something we’ve needed  for years,” said Eck. He also said that GM need to continue to “feed back the concerns of repairers to the engineers designing the cars” to make sure the concerns of repairers are taken into account at the design level.

Eck mentioned that he had been brought into the design loop in the case of the Cadillac CTS. “We need to do more of this,” said Eck. The introduction of the Cadillac CTS, specifically how the information was presented to repairers and equipment suppliers, is a major step forward in the development of the modern collision repair industry. According to Eck, the CTS represents a new evolution in the way GM handles its relationships with repairers.

Eck went on to say that he has, “a lot of respect for the groundwork that has gone into these programs over the last couple of years. We’ve been reviewing those and thinking about how to go forward.” But the introduction of a general GM certification program would be a unique, complex and massive undertaking. The sheer number of GM vehicles on the road means that this is a program that would have to be rolled out in tens of thousands of shops across North America.

The nature of such a large program brings with it some technical challenges. According to Eck, GM is currently “thinking about what technologies are being used in other industries” that could be used in the collision repair industry to verify and certify repairs.

“You guys are familiar with aluminium hoods and side panels. But when it comes to aluminium in the structure, those have to be replaced. We have to look at how technology can be used during a repair process to determine whether or not that’s a good weld,” said Eck. He mentioned the photo upload technology used to document vehicles that are being returned from lease could have a use in such a certification program to check and certify repairs. “It might not look like the certification programs we know. We’re looking at the mold itself,” said Eck. “We’re talking to operators of big providers of these system to make this happen.”

Eck wouldn’t say if there is a timeline on the announcement of a certification program, but he did hint at further announcements to come in the months ahead. “We have some new things coming up. Some of these proposals are going through engineering and marketing right now. We can’t give these projects away, but they are unique,” said Eck.

Talking about the need for some kind of technology-based certification program, Eck did not mince words when it came to some practices in the current industry. He mentioned a recent research program at GM in which the company gathered data on mid-sized SUV repairs that included ultra high-strength steel and aluminum. The company was able to figure out which parts were being repaired and which ones replaced, as per OEM instructions.

“We looked at the vehicles and for some reason, for cost reasons presumably, we found OEM procedures undermined. In 57 percent of the cases, manufacturer repair procedures were not followed to the letter. I know that number is not going to go to zero but we think it has to be lower than 57 percent,” said Eck. “I understand that on this call we have the best shops in the nation. But at the macro level not all shops are so sophisticated. When I read about these industry numbers … it does keep me awake at night. Who are the people working on the vehicles we manufacture?”

Returning to the idea of a shifting “balance of influence” in the industry Eck said that, “The solutions we come up with may not be something that everyone will agree with, but at least we can begin to talk about these issues. We have to build the program so that there is some way for us to be sure that repairs are being done to specifications. We have some ideas and are having discussions.”

Eck went on to talk more generally about GM. The company is having a record year, and will manufacture over nine million vehicles. The company’s online parts ordering system, MyPriceLink is working well, but no word as of yet if it will come to Canada. “MyPriceLink is going very well. We’re averaging less than one second in response times. That’s amazing consider the millions of requests it gets every month,” says Eck.

Eck wound up his presentation by pointing to the need for the all stakeholders in the collision repair industry to collaborate and focus on the needs of the customer.

“We need to make sure that the owner’s expectation, that others in the process will return the vehicle to standard, is met. Insurers want the vehicle repaired appropriately and they also want the cost as low as possible. I understand that. Perhaps we at GM have not done enough to educate the insurers and explain why you can’t use this part, or why you can’t cut out that part of the frame,” said Eck. But his overall message was that change will continue in the industry and that repairers, insurers and OEMs all have a stake in making sure that the current wave of change is managed properly and carefully.

“I understand that the industry has changed. We’ve pushed the industry to change to adapt to the realities that (we) see coming down the pipe. We have to put more resources toward training,” said Eck. “At the end of the day it’s all about the customer and how they expect the vehicle to be returned to them after an accident. There is collaboration that has to happen at all levels to make that happen. It’s all about collaboration. You are the doctor, the artists, working on the cars. You want a good output, something you would put your family in. It is going to be important to focus on the output as the industry continues to navigate the changing realities.”