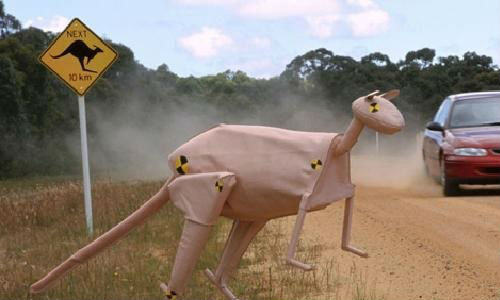 Peterborough, Ontario — November 23, 2016 — The roads are filled with strange things your customers might encounter, like wild animals, black ice, tree branches, and sometimes even buildings! All of these have to be accounted for by automotive manufacturers while developing and building vehicles. Interesting, intriguing, and just plain strange crash testing techniques and dummies have been developed over the years in different places. Read on, and find out just how weird this topic gets.

A road hazard almost completely unique to Australia, kangaroos are actually a legitimate menace for the average Australian driver. According to news.com.au, “There are about 20,000 collisions with kangaroos in Australia each year,” which accounts for a sizeable percentage of the country’s 600,000 yearly road accidents (according to Roy Morgan Research). The risk of kangaroo related crashes have apparently increased in recent years, leading to the creation of the kangaroo crash test dummy, which tests a cars ability to withstand a kangaroo-related accidents without harming the driver or passengers.

The Moose Test Dummies of the North

Originally designed by the Swedish National Road and Transport Research Institute, the Moose Crash Test Dummy, pictured below, has been copied and used in Canada, Russia, Sweden, Finland, Denmark and other countries to mimic the Nordic danger of moose. Moose are massive animals, weighing up to 1600 lbs. on average. For reference, that’s only 300 lbs less than a 2016 Mitsubishi Mirage. The biggest danger associated with moose, however, is their height. As a result of their long legs, they provide a unique risk for most cars that aren’t pickup trucks. The average moose height is about seven feet with their heads up, putting them well above the usual collision zone for most vehicles. When colliding with a moose, it’s more akin to a 2016 Mitsubishi Mirage falling on your roof than crashing into one straight on. As it is mostly a Nordic problem than a central European or American problem, Volvo and Saab have both been instrumental in the development of the moose test dummy.

Created by the US-based Solvit Products company, the 75 lb. crash test dummy dog was designed to be as accurate to the dimensions and anatomy of a fully-grown dog as possible, in order to accurately test the company’s line of pet-based restraining devices for cars. It’s a very neat concept, and will hopefully save a lot of pet lives in the future as the product line is more fully implemented. According to Solvit, only 16 percent of dog owners use some sort of restraint for their dog in the car. Letting your dog range free in your car can not only be dangerous for the dog, but dangerous for you as well. According to data collected by the American Automobile Association (AAA), 30 percent of drivers who drive with their pets admit to having been distracted in the past by their pet, which increases the risk of being involed in a crash by 100 percent, according to information from AAA’s Foundation for Traffic Safety.

This one hurts to look at. Auto manufacturers often use near-perfect examples of popular older vehicles to test new cars. This process is important for two reasons: the first is that it helps them analyze the damage to new cars that would occur in the event that they hit an older vehicle without any of the modern safety equipment that is now standard, giving them real-world data to work with.

Thankfully, the topic of this one isn’t pictured above. It may seem morbid, but believe it or not, cadavers have been used in crash tests since at least the 1930s. They provide an (obviously) realistic simulation of live human beings behind the wheel, which have helped auto manufacturers to make far safer vehicles for real humans, by allowing manufacturers to collect data on small fractures, muscle strains and ligament injuries that simply can’t be mimicked by using traditional crash test dummies. Don’t worry though, if someone hasn’t explicitly signed up fully consciously for their remains to be used in this manner, they won’t be. Their contributions have saved hundreds of lives, and if you’ve ever been in an accident, they may have helped save yours!

PrevPreviousCarrossier ProColor awards $5,000 in scholarships
NextStepping up: Calgary repairer helps little girl get back on her feetNext